Villains Wiki
Register
Don't have an account?
Sign In
Advertisement
in: Doctors and Scientists, Egotist, Dimwits,
and 44 more

Dr. Diminutive is a recurring antagonist of the famed Disney Channel series Phineas and Ferb. He is an infamously hegemonic scientist and a member of L.O.V.E.M.U.F.F.I.N., founded by Heinz Doofenshmirtz. This mad scientist has lost all hair except around the temples and wears glasses. He is named for his short stature, and due to that, makes him the shortest member in L.O.V.E.M.U.F.F.I.N.. He is also the nemesis of O.W.C.A. Agent Newton the Gnu.

He was voiced by Dee Bradley Baker, who also played Perry the Platyborg, the Goozim, the Spider-Monkey, the Corn Colossus of Juatchadoon, Candace's Id, and Derek.

Diminutive was first seen in at the press meeting for the formal introduction of L.O.V.E.M.U.F.F.I.N., where he pointed out to Dr. Doofenshmirtz that there was no press. He was defeated when Doofenshmirtz's nemesis Perry caused some debris to fall on him, the same thing would happen to Doofenshmirtz and the other scientists.

Diminutive was seen as he was disqualified from the L.O.V.E.M.U.F.F.I.N Pageant of Evil because of his height, implying that "I don't have a Napoleon complex, Napoleon had a me complex!" He was later seen making a vote; though it is unaware if he was voting for either Doofenshmirtz, Rodney, or Lawrence Fletcher.

Diminutive has taken his nemesis, Agent Newton the Gnu, hostage after the latter's identity was accidentally exposed in the blogging internet by Doofenshmirtz, though Perry manages to foil this and rescue Newton from Dimunituve.

Diminutive is seen taken to trial for supposedly messing with the airwaves. However, it turns out that he stole one of Doofenshmirtz's -inators that caused it to happen, resulting both Doofenshmirtz and Diminutive to spend the rest of the day in jail.

Diminutive later appears in the special "Phineas and Ferb Save Summer", where he is seen attending the L.O.V.E.M.U.F.F.I.N. First Annual Disservice Awards, until the members found out that they're sharing the same ballroom with the O.W.C.A. agents, resulting a nasty streetfight between the two. Diminitive later appears when the villains meet up in a drafty warehouse, where Doofenshmirtz explains that he has successfully moved the Earth away from the Sun with his latest -inator. When Doof presents out the blueprints of his -inator to prove that he was the one who created it, Diminutive and the other members are delighted to see that Doof has actually succeeded on a grand evil scheme for once. At that point, Rodney suggested that they take the opportunity to reveal themselves to the public and enact their plan: to rule the world.

During the special, whenever someone make a noise around the warehouse (such as the time when Monty Monogram make a sharp gasp upon the villains' plan to take over the world or when Candace Flynn screams out in terror), Diminutive believes that the building is 'just settling', something which the other villains don't buy. Diminutive also participates in helping out round the O.W.C.A. agents and locking them up in the warehouse. He was even delighted that the world was finally under L.O.V.E.M.U.F.F.I.N.'s grasp after Rodney uses his new -inizor (which is just ten times the size and strength of Doof's -inator) to move the Earth into perpetual winter. However, the agents were later freed (by a street rat) and engage into another battle with the villains, until Diminutive pointed out that this is just the same brawl back in the ballroom, something which both the agents and villains realize. At that point, Diminutive and the villains all decided to flee away from the warehouse for good. 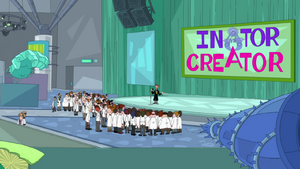 Diminutive seen among the attendants in the Second Inator Competition. 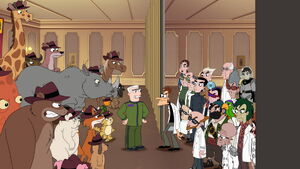 Diminutive and the members of L.O.V.E.M.U.F.F.I.N. learning that they're sharing the same ballroom with Major Monogram and the agents of O.W.C.A.. 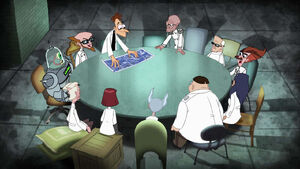 Diminutive and the others being surprised to see that Doofenshmirtz succeeded in his plan to move the Earth to an early autumn. 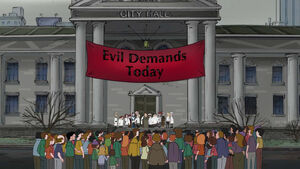 Diminutive helping out with L.O.V.E.M.U.F.F.I.N.'s demands at City Hall.