Psychopathic Mad Scientist
Dr. Dome is the main antagonist in on the TV series Regular Show in the special "The Dome Experiment". His goal is to study the employees of the Park and prevent Benson from finding out the truth.

When the Dome was placed over the Park, Dr. Dome and his team of scientist arrived claiming that they want to study the park's ecosystem for a month. They cut off the park's power and water supply, then have drones deliver packages they contain food and supplies for the employees. Benson tries to get some answers but gets knocked out in the process. He returns to the house to find that everyone is doing well living of the land. He tries to show everyone the inner dome but it mysterious disappears. So, all through the month Benson trains himself to find out what Dr. Dome and the scientists are planning.

When Benson infiltrates the inner dome he is confronted by Dr. Dome and the other scientists, who explains about the dome until he reveals he changed the date on Benson's P-mail. Benson now claims he has prove of their plans then wonders about the blueprints. The scientist then capture Benson and Dr. Dome eats the evidence to cover his tracks. Then try to trick him with some scientist disguised as his friends but Benson manages to escape. Benson then finds the other park workers and explains the true intentions of the dome. They all then fight back against the scientists and Dr. Dome.

They're close to escaping until Dr. Dome starts closing the roof shaft. Benson manages to blow it open then gets Dr. Dome frozen. His fate remains unknown after the special. He made a cameo appearance in "Chili Cook-Off" in a portrait along with Mr. Maellard and Gene. He then appears in a flashback in the episode "The Button." 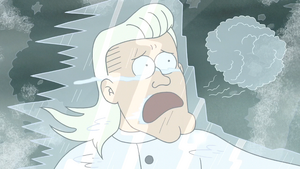 Frozen Dr. Dome
Add a photo to this gallery

Retrieved from "https://villains.fandom.com/wiki/Dr._Dome?oldid=3972604"
Community content is available under CC-BY-SA unless otherwise noted.