He is a mad scientist who strives to defeat Kim Possible and steal her "spark" in order to become the most powerful villain in the world, as well as Shego's employer, and Athena's creator.

At some point prior to the film, Drakken (for unknown reasons) became a supervillain bent on taking over the world, though he continuously encountered Kim Possible during his numerous schemes and was foiled by her every time, leading to him developing a deep hatred for her and eventually being imprisoned in a facility in the Arctic Circle. Drakken is first seen in his cell, musing over the different times he's been defeated by Kim, and proceeds to take out his frustrating by pretending to throw his archenemy into an alligator pit (in reality, dunking a doll in the toilet). As he is doing this, Shego breaks into the prison to free him, also mocking him for his childishness. Drakken then learns from Shego that she has completed all the instructions that he gave her, and, after remarking that Kim's defeat is now "probable", the two escape in Drakken's ship.

Drakken and Shego make it back to their new lair, where the former complains about how inferior it is to his previous island lair (which Kim destroyed), remarking that villains like Duff Killigan and Señor Senior, Senior have superior headquarters. Shego subsequently taunts him over the fact that all of his evil plans have been foiled by a simple teenage girl, though Drakken retorts that Kim isn't as simple as she may seem, claiming that she has a certain spark that allows her to defeat every villain she comes across; revealing that he wants to steal this spark for himself in the process. Drakken begins to spy on Kim following this, and after witnessing her fail to make the Middleton High's soccer team in spite of her incredible abilities, Shego remarks that his plan is going poorly. In response, he claims that Kim is being broken down by her new surroundings (stating that high school can turn even the most confident adolescent into "a helpless mewling kitten") and that once she is at her weakest, he will isolate and steal her spark.

However, immediately following this, Drakken realizes that his his Basic Spark Transfer System is out of energy, and that Shego had failed to obtain the Zicadium-246 he needs to power it, buying a "cheap knockoff" from the internet instead. Furious, he orders Shego to go steal the real Zicadium, remarking afterwards that he has only hit a detour on the road to victory. Despite interference from Team Possible and Athena, Shego succeeds in stealing the Zicadium from a secret government facility, taunting Kim with the idea that Athena is outgrowing her as she escapes. Returning to Drakken's lair, Shego finds him watching the security footage of Kim being locked in an electric eel tank with Ron and Rufus, delivering the Zicadium and reluctantly admitting that he was right about Kim's confidence being diminished. Delighted with this, Drakken decides to "accidentally" leak the footage of Kim being scared out of her wits on the internet, resulting in her confidence being crippled even further while Athena grows to be even more popular and skilled than she is.

Later, during an assembly in Athena's honor, Drakken and Shego burst in, the former announcing their intentions to abduct her before she grows to be too powerful. Drakken proceeds to watch as Kim jumps in to deal with his henchwomen and save Athena, only to fail as she tries to do everything alone instead of accepting the latter's help, causing him and everyone else at the assembly to laugh at her. With Athena in his grasp, Drakken tells the school that he is going to perform his most diabolical scheme yet, only for Shego to cut him off before he can reveal the details of his plan, with the two escaping quickly afterwards. At his lair, Drakken begins to celebrate his victory by chugging down bottles of milk, leading to an argument between him and Shego about who was the most impressive in completing their part of the plan. Before this can continue, Athena stops them both from fighting, stating that she had completed her own task of gaining Kim's trust and using it to "destroy" her, causing Drakken to admit that she did play her part the best. Athena then and asks to know what's next in store for the three of them, Drakken subsequently telling her that her next mission will come soon, proceeding to laugh evily with Shego afterwards.

Later, Drakken prepares to implement the last steps of his plan, only to realize that his Brain Modulator has disappeared, though he quickly finds that it has been relocated to a different part of the lair by Shego and Athena (which the former had neglected to tell him about). Impressed by the previously unseen area of the lair, Drakken begins to post photos of it on Villinstagram while Shego prepares Athena for her next mission. After Athena reveals her true nature and purpose to Kim, Drakken and Shego begin to strap her into the brain modulator, claiming that her restraints are for safety purposes. Team Possible then arrives to stop them, although, having foreseen their arrival, Drakken locks them all in an energy cage which he claims is inescapable due to the off button being across the room (Shego criticizing him for revealing where the button is afterwards). With his enemies trapped, Drakken starts to tell them about he details about his plan, only for Ann and Nana Possible to interrupt him, expressing annoyance at his monologue. Ignoring the interruption, he continues and claims that, while he was stuck in prison, he deduced that Kim had a spark that allowed her to defeat any enemy she came across, and so built a cybernetic humanoid named Athena to break down her confidence, isolating her spark and allowing the former to make a digital version of it. Drakken then reveals that he is going to transfer the digital spark Athena made into him, as, with his own abilities and Kim's spark, he'll be invincible.

Once he is finished with his monologue, Ann asks about what will happen to Athena, and Drakken, unaffected by the thought, states that she will be destroyed, to her and Team Possible's horror. Drakken becomes confused at Kim expressing concern over Athena, claiming that she is just a robot, though Kim claims that she is still her friend despite that. Drakken is jokingly touched by Kim's claim, and then begins to sadistically close the cage in on Team Possible, preparing to destroy all of his enemies at once. However, using a drone Ron had brought along, Rufus and Wade manage to free their allies from Drakken's cage, leading to a fight between Shego and Kim, as well as Drakken, Ann and Nana. Drakken manages to trap the two in a net as they are attacking him, and locks himself in the brain modulator, which he has Shego activate. He then begins to absorb Kim's spark while destroying Athena in the process, though Kim ends up destroying the machine, reversing the process, to Drakken's horror. Wade notices that, as a result of the machine being interrupted, a side-effect is being posed on Drakken, which ends up de-aging him into a young boy, much to Shego's amusement.

With his plan having failed and his lair now going to to explode thanks to the unstable Zicadium, Drakken and Shego escape, leaving Team Possible and Athena to be destroyed. However, Athena manages to absorb enough energy from the Zicadium to reduce the explosion and allow Team Possible to escape, managing to survive the process and subsequently join Team Possible for real after being rebuilt. Later on, Drakken, who is still trapped in his child form, begins to study the slang and mannerisms of his generation, while Shego disguises him as a normal child. Once this is done, Shego hands him papers that state that he skipped a number of grades because he is "gifted", sarcastically insulting him in doing so, and Drakken comments that despite appearances his new body is actually a blessing in disguise, as Kim won't be able to hide from him now. Drakken then heads off into Middleton High, remarking that his new master plan to defeat Kim Possible will be his "tightest" yet. 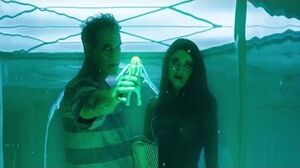 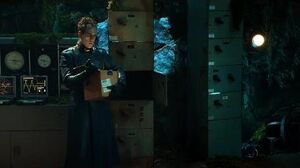 Kim Possible (2019) This Is A Cheap Knockoff 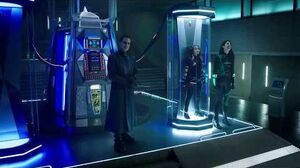 Retrieved from "https://villains.fandom.com/wiki/Dr._Drakken_(2019)?oldid=4008596"
Community content is available under CC-BY-SA unless otherwise noted.