Murdering/torturing anyone he can.
Researching the human body.

Destroy humanity with his army of zombies, kill Ludvig Maxis (succeeded).
Survive the zombie apocalypse, rule a world of zombies and use the Aether to become omnipotent.

He is a sadistic and sociopathic Nazi scientist and professional torturer who is feared even by his own people and was part of the "Group 935" project that accidentally created the zombies as assistant to Dr. Ludvig Maxis.

He was voiced by Nolan North.

Wanting to create an army of undead under his own command, Richtofen betrayed Maxis, who was sane enough to keep his experimentation at a slow pace so as not to start a Zombie Apocalypse, by locking him and his daughter Samantha Maxis in a room with a zombiefied dog. Maxis himself survived, but committed suicide due to the death of his daughter and his factory subsequently becoming overrun with the zombies.

Richtofen then used a teleporter to escape to Shi No Numa, where he used the kidnapped, physically-enhanced and brainwashed soldiers Tank Dempsey, Nikolai Belinski and Takeo Masaki to help him return to the source of the zombies where he could take control of them by pretending to be just another random survivor like them.

Eventually they reached the Moon where the body of Samantha Maxis, who was reborn as the "Announcer" controlling the zombies due to her exposure to Element 115, is, and using the golden rod and magical stone he acquired earlier in the Siberia and Shangri-La levels, releases Samantha from the pyramid she is kept inside of and switches souls with her, becoming the new controller of the zombies and putting Samantha in his own body. It is unknown what happens after this until the next game comes out.

Richtofen makes a returning appearance in Black Ops II as the new Demonic Announcer. Despite not been physically seen in the first three maps, Nuketown Zombies, Green Run and Die Rise, his voice is only heard, especially when he speaks to one of the Green Run survivors, Samuel J. Stuhlinger, giving him instructions on heating up the 'obelisk'. It is currently unknown what Richtofen's intentions for the survivors are, but it seems that his instructions to the survivors are intertwined with Maxis' instructions.

Richtofen also appeared in Origins, this time as the combat inexperienced and sane scientist of the surviving quartet, but the most intelligent of the four. 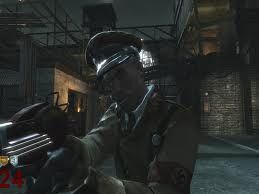 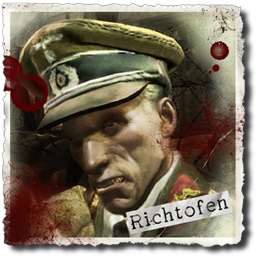 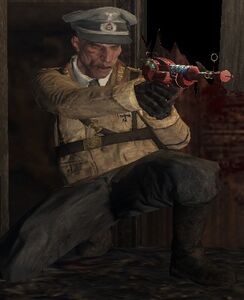 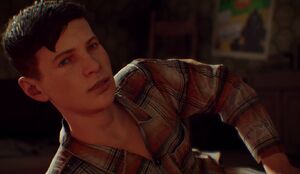 Richtofen as a child. 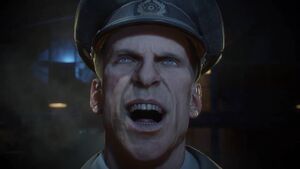 Ultimis Richtofen in "The Giant", laughing. 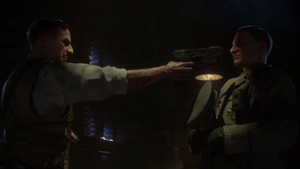 Ultimis Richtofen moments before his death by his Primis counterpart.
Add a photo to this gallery

Retrieved from "https://villains.fandom.com/wiki/Dr._Edward_Richtofen?oldid=4210178"
Community content is available under CC-BY-SA unless otherwise noted.