Destroy Sonic the Hedgehog, the Freedom Fighters, G.U.N. and almost anyone else who stands in his way.

Dr. Eggman, born Julian Kintobor of the House of Ivo, initially known as Robo-Robotnik and in later issues as Dr. Ivo "Eggman" Robotnik, is the main antagonist of Archie's Sonic the Hedgehog comic book series, who only became the primary antagonist after the death of original Dr. Ivo Robotnik. He is also the arch-enemy of the Freedom Fighters.

Dr. Eggman in the Archie comics, was originally Dr. Ivo Robotnik (or Julian Kintobor) from an alternate universe, who managed to defeat his universe's Freedom Fighters and reign supreme as Robo-Robotnik. After he became Robo-Robotnik through roboticization, he was a man no more, but rather an artificial intelligence that inhabits a robotic body. He finds the way to mainstream universe of Archie Sonic the Hedgehog Comics (the so-called Mobius Prime) and starts a new conquest under the disguise of deceased Ivo Robotnik (Robotnik Prime). Later leaving the disguise and choosing a new body. Though Dr. Eggman used his robotic abilities for some time, he was later de-roboticized into flesh and blood by an alien race called Bem.

In addition to this, Dr. Eggman is perhaps one of the most intelligent and criminally insane of all the Robotnik alter-egos. He roboticised an entire city of humans as a show of power and has done much evil to the Mobian population. Although not conquering as much territory as his predecessor, he never gives up. Ulike Robotnik Prime, he was able to survive all encounters with Sonic; and even after temporarily going insane and getting overthrown by the Iron Dominion, Eggman managed to rise again and rebuild his world-wide empire from the scratch.

However, Archie's Dr. Eggman somewhat admires Sonic as an adversary, yet also despises him for the very same reason. It is not unknown for the two to form alliances but Robo-Robotnik's mass-murdering tendencies keep them from lasting long.

A classic sociopathic narcissist, Eggman retains his inflated ego, insanity, and lust for power, which he has in the video games, as well as his staggering I.Q, inventiveness, and the fact he employs Badniks. However, in the comics, his status as evil is much more apparent. Unlike the lovable but villainous Eggman of Sega lore, who had some honor and morality, this Eggman was perfectly fine with committing mass murder and torturing his opponents and giving prolonging suffering to them, without feeling a pang of remorse.

While he could be somewhat childish at times, and had a very well-developed funny bone, his wisecracking attitude and whimsy only made him more dangerous, since it gave the false sense that he wasn't so suspicious. Many of his schemes and actions rivaled or exceeded those of the version of Dr. Robotnik from the 1993 cartoon, especially his desire to totally industrialize the world and roboticize every living thing. Additionally, while he detests Mobians, the animal-like beings, he is somewhat more tolerant and accepting of Overlanders, the species he belongs to, making him racist.

Despite all this, Eggman is in the presence of small non-evil qualities Robotnik Prime did not have when his new personality started to overwhelm his old life after the Super Genesis Wave. Despite this, Eggman was willing to go to even further lengths to get back at his arch-nemesis, such as (during one of his more mentally-imbalanced moments) being willing to destroy half of the EggDome and all within to destroy the Freedom Fighters, and in the crowning moment of his insanity, being willing to disrupt the Super Genesis Wave to get back at Sonic (not caring that this could have possibly destroyed reality itself; and indeed, even afterwards this had severe permanent after-effects).

Even this action, however, Eggman regarded as "too crazy" for himself. However, he still enjoys terrorizing people and would even kill them if need be.

After the Genesis Wave event, his personality somewhat mellowed out, though he remained mostly ruthless and cruel to his enemies and underlings. For example, instead of blowing up his Egg Army soldiers for disloyalty, he instead paralyzes their bodies and then stores them away for indefinite periods of time.

He also did save the life of Egg Boss Clove's sister, Cassia by cyberizing her, but lied that the process cured her of her debilitating disease, and would only continue to treat her condition if both sisters remained loyal to the Eggman Empire.

According to Breezie, Eggman is also affectionate to his robots, and hates to see them destroyed, especially by each-other. He even went as far as to personally infiltrate a highly dangerous dimension just to rescue Metal Sonic. 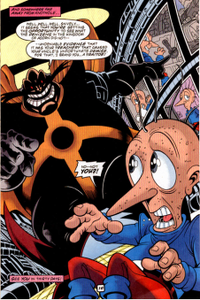 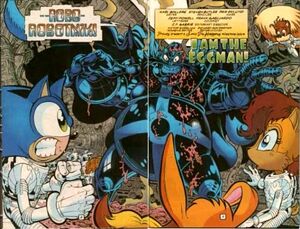 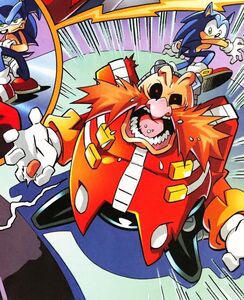 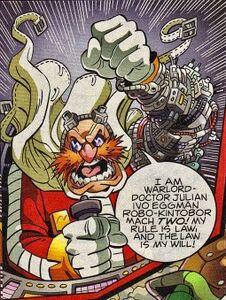 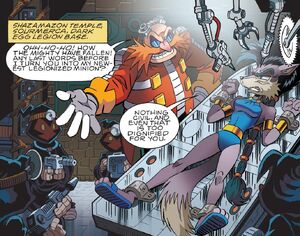 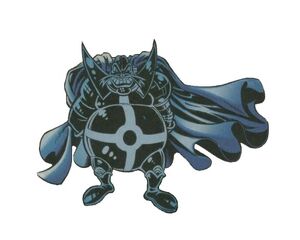 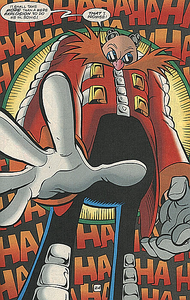 Robo-Robotnik after downloading himself into his "Eggman" body for the first time. 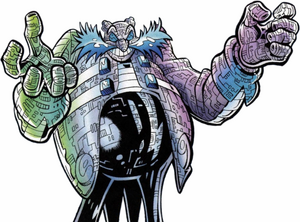 Dr. Eggman's robotic body before he was de-roboticized. 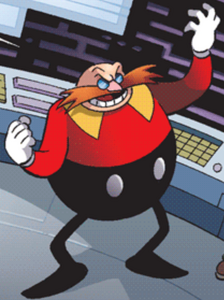 Dr. Eggman as he appeared in the Genesis arc and in his early years after the Worlds Collide arc. 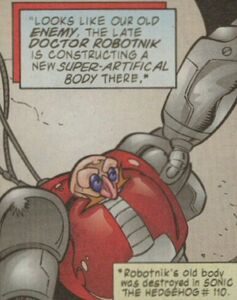 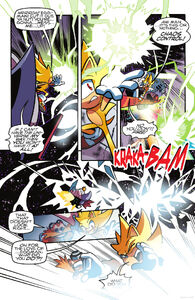 The "Super Genesis Wave" that caused multiple universes to be erased from existance.