This article is about the Sonic Boom Villain - you can find information on the mainstream version in Dr. Eggman

Conquer the world
Build his own theme park

Dr. Eggman is the primary antagonist of the Sonic Boom universe and the wannabe ruler of Bygone Island. He's a human scientist and is the most powerful villain in the world and plots various schemes for world domination. Like his mainstream counterpart, he's the rival to Sonic the Hedgehog and controls his own island fortress. In the TV series, Eggman's role as an antagonist remains, but it often changes depending on the episode as he sometimes ends up being an ally of Sonic.

Eggman has a red military jacket with white gloves, yellow cuffs and a nifty gizmo on his right forearm. He also has a barrel chest, beefy arms, little feet, and his legs are short but powerful pistons. He wears blue goggles to protect his eyes from atoms and stuff and green goggles on his head that he does use, (Shown in Cowbot) He also wears nifty pink long johns at night and on days where he doesn't have anything to do. He also has an overcoat, a fitness vest, a diving suit, and he wore a lederhosen during eggtoberfest.

Eggman had dug up these weird Cyclops robots, and spend ages repairing them. But when he finally fixed them, Sonic and his friends showed their faces and decided to see how his repaired buckets of bolts might fare against them, but fearing they might fail, he brought Metal Sonic along to help out. So Eggman and the metal hedgehog got team Sonics attention, and they gave chase. Eggman asked them; "what was better than an ambush?" Tails suggested an ambush with ice cream, that while sounding delicious, was incorrect. It was a post ambush ambush. Tired from chasing him, Eggman lured them into an open space, where the old robots and metal sonic attacked. Overwhelmed, they entered a tomb where Eggman had hoped they would remain forever. Sadly, this was not so. Later, he infiltrated the decrepit establishment where he got the old robots. Eggman saw Lyric and tried to use the old robots to keep him in line, as he seemed like a good lackey. Sadly, he used this weird button and turned all the robots against him. After haggling, Eggman found himself at that monsters mercy. Later, he had to get this map from team sonic, but they got lost down a waterfall. Later, when Lyric tried to kill him for not meeting his high standards, he found Metal Sonic, and hoped that Metal might be immune to Lyric's mind control. Sadly, Lyric used his own robot against Eggman because his own robots where too useless to stop him. Fleeing, Eggman retreated into hiding, and returned with a manually controlled mech, and used homing missiles on the reptilian renegade, but Lyric's infuriating mind-control device screwed up the missiles navigation, and Tails and Amy mocked him with this lame insult-they called him classic egghead.

Later, Eggman decided to let Team Sonic do the hard work of subduing Lyric, and on his last legs, Eggman used his damaged mech, shot Lyric, allowing his hated hedgehog enemy to finish him off. Once Sonic and his friends left Lyric's lair, Eggman snuck in, and took Lyric's mind control device. With that and metal sonic at Eggman's side, surely, nothing will be able to stop him.

In Rise Of Lyric, Eggman acted like an evil, cunning (if somewhat clumsy) super villain, and traitorous sidekick to lyric. Eggman has an amazing I.Q. and can build many dazzling robots, weapons, vehicles and other devices. He is a greedy, megalomaniac who's narcissism and self-importance motivates him to seek global conquest with his vast resources and enslave the world's population. But in other Sonic Boom media, the relaxed storytelling explored Eggman's personality more elaborately. Despite his status as super villain, Eggman also appears to be insecure deep down, and works hard to maintain his reputation as a bad guy, getting easily upset and annoyed if ridiculed. He also has poor social skills, as he commits acts of destruction out of a desire for Sonic and others to acknowledge him. Despite this, Eggman does have fans who visit his lair and enjoy his mechanical inventions. When he isn't playing at the villainy game, Eggman has many normal, benign, hobbies, like resting in a private garden, baking muffins on a Tuesday night, playing fuzzy puppy buddies with Amy and taking spin-classes. He also ran an improv trope called the 'gigglesnorts' and is hinted to take part in athletic sports(though is poor at pole-bolting). He is also neurotic, due to a possible bad relationship he had with his parents, which has been hinted at and He claims he was also bullied in school. He also claimed to never lived with organic people, though he was probably lying about that. Outside of battling Team Sonic, he also can swallow his pride and help others in need, even teaming up with and being friendly with Sonic whenever life throws too many challenges at the good doctor to deal with alone. Despite having the status as super villain, altruism is not above Eggman, and he once offered Tails dating advice, without any incentive or ulterior motive.  His evil schemes seem less like serious attacks, and more like a fun game he can play with sonic. However, his 'games' can be dangerous to bystanders, and his impulsiveness and disregard for nature or the safety of others make him a dangerous criminal, and definitely a villain in his own right.

Dr Eggman: connoisseur of evil ham, builder of robots, would be ruler of bygone island, a thorn in Sonic's side and a professional mustache groomer 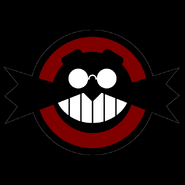 Eggman in his fitness vest

When sleeping or having a lazy day, eggman wears a pink flapjack onsie

"What am I supposed to cover with that? Are you making fun of me!?!?" 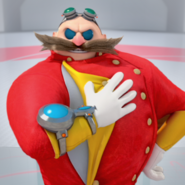 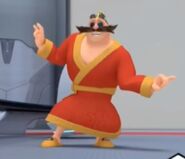 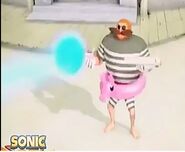 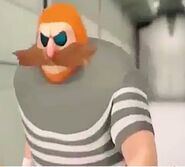 As Lord Mighty Metal Butt, plus holding a Tummel Crystal
Add a photo to this gallery
Retrieved from "https://villains.fandom.com/wiki/Dr._Eggman_(Sonic_Boom)?oldid=2323769"
Community content is available under CC-BY-SA unless otherwise noted.