Villains Wiki
Register
Don't have an account?
Sign In
Advertisement
in: Female, Doctors and Scientists, Conspirators,
and 37 more
English

Conspiring to conceal or eradicate superhumans.

Capture David, Elijah Price, and Kevin Wendell Crumb and have them killed if they escape (succeeded).

Suppress or kill anyone with superpowers (partially succeeded).
Prevent the world from knowing superhumans exist (failed).

Dr. Ellie Staple is the head psychiatrist at a mental institution in which Elijah Price (better known "Mr. Glass"), was held. After both David Dunn and Kevin Wendell Crumb were caught by police, they were taken there too.

Staple has discovered ways to keep the three of them under control - she equips Kevin's room with a set of flashing lights that activate with Kevin's closeness, this makes another personality to take over, imitating "the light" inside Kevin's. David's room is equipped with hoses connected to a water tank, activated if David shows any dangerous behavior, she also keeps Elijah heavily sedated to contain the power of his mind.

Along the movie, Staple performs various tests on them as well as interviews with their closest relatives and friends, when Joseph, David's son tries to rescue his father from the Asylum, Staple interviews him about his mother's passing, event she thinks attributed to David's and Joseph's delusion, she also has been interviewing Elijah's mother along the years, she shows to still love her son and constantly visits him to cheer him up. Also, Casey Cooke, the only victim to survive the Beast, asks permission to meet with The Horde, during this encounter of which Dr. Staple is witness, she discovers that samples of true love can make the true Kevin take control of "the light". Later she informs Elijah they will have a procedure on his brain. Staple meets with the three of them to counsel them and persuade them that there is no such thing as superhuman powers and that they simply have a mental illness that causes them to believe so. She gives numerous "proofs" to them that there is a scientific reason behind their feats, David and Patricia (Kevin's most loyal identity to The Beast) begin to doubt. However, Elijah teams up with The Horde, as it's revealed he has outsmarted his captors once again as he has been faking to be sedated all along, he visits Patricia in the middle of the night after escaping his room and convinces her to keep her faith on The Beast. The next day Dr. Staple wakes Elijah up and tells him they have footage of him escaping and the procedure has been advanced, however she doesn't know Elijah has sabotaged the machine, keeping his IQ safe and faking to be numb once again, that night when one of his nurse guards checks him out, Elijah cuts his throat with a shard of broken glass and after getting The Horde to unleash his most "The Beast" and the two escape.

Elijah makes known his plan is to go to a public event and make David and The Beast fight in front of the public and the cameras, Staple and squads of armed Philadelphia police troopers go after them to kill them to prevent the world from learning the truth about superpowers. During the fight, Joseph, Casey and Elijah's mother arrive to the asylum, Joseph reveals to The Beast that Kevin's father was in the same train wreck his father survived (of which Elijah was already aware of) The Beast turns on Elijah and crushes his shoulder and ribs, David stops him, and they keep fighting, The Beast throws David to the water tank, but David manages to escape but is severely weakened by the water, and then killed by one of Staple's men, who drown him in a puddle. The man holds David's head up to allow Staple to reveal to David that she is part of a secret organization dedicated to hide the truth about super-humans; meanwhile, Casey hugs The Beast to make Kevin take the light, unaware that Staple's men were waiting for this to shoot Kevin, who dies in Casey's arms as the personalities dedicate a final farewell to her before the true Kevin finally succumbs. As Elijah is also dying from his wounds, Staple reveals to him he was right all along. Elijah then dies in his mother's loving arms telling her he was never a mistake, to which his mother replies he was spectacular.

After the events, Staple meets with the organization and tells them they have succeeded, and she's ready to move to the next city, as the plan A of the organization is to: first try to convince super-humans they are not special and plan B is killing them. However, despite Staple success on killing the main characters, she realizes that maybe Elijah had another plan, she checks on the Asylum security cams, everything has been deleted by her to hide the truth, however, she also realizes Elijah had previously hacked the security cameras of the mental institution and sent the footage to Joseph, Casey and his mother, who then reveal the truth to the world to avenge and honour their loved ones. Staple is last seen on a security camera, screaming in rage, despair, and impotence, as her plans and the organization's plans have been foiled.

Afterwards, Staple was not seen or heard from again. Since Glass is the final film of the Unbreakable series, the fate of Staple and her organization remains uncertain.

Dr. Staple is a skeptical, but caring individual, who believes she's helping delusional patients. However, as the movie goes on, it shows other sides to her that either compliment or sharply contrast that surface. For starters, when Joseph tries to convince her to release David through an elaborate story, she displays a hint of sarcasm, before coldly verbally dissecting Joseph. Claiming that he only plays along with the superhero delusion to cope with loss and try to be close to his father. It also shows she is very skilled at manipulation, because despite both this movie and Unbreakable showing otherwise, it nearly convinces Joseph of that truth. A manipulation that she was used to making David and The Horde doubt their respective abilities. Later on after Joseph and Casey get to the bottom of their respective investigations at the comic book store, prompting them to approach Staple, she dismisses their suggestions, going on a rant about how comics are nothing more than commercialism designed to sell shows to teenagers and shouldn't be considered, showing a negative view of the comic industry as a whole.

In the end, it reveals that, as a member of the unnamed organization, all these traits culminate into a new meaning. Being a manipulative, cold, condescending, individual with a hatred and fear of anything supernatural. As well as a near Templar level of obsession with keeping order and normalcy. Despite all this, Staple was able to keep a sense of stoicism, until her group gets exposed for what they did and who they are, which leads her to scream in anger and fear. 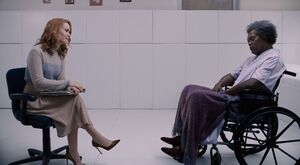 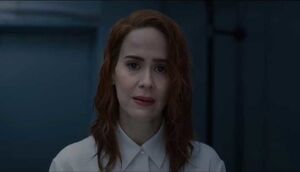 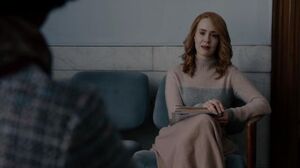 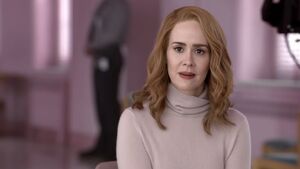 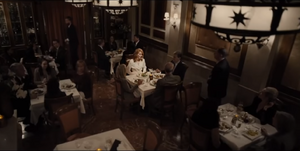 Dr. Staple revealing herself as a member of an organization dedicated to eliminating superhumans

Dr. Staple's defeat when she realizes Elijah's true intentions have been accomplished and that the world has now figured out superpowers exist.