Torturing other SCPs within Site-13

Perform brutal experiments on others.

Dr. Elliot Emerson is an antagonist within the SCP mythos. He is the overarching antagonist of the SCP-1730 tale (also known as "What Happened to Site-13?"), which centers around the aptly mentioned Site-13, a building belonging to the Foundation from an alternate reality.

Emerson acted as Site-13's Site Director prior to the disastrous events that would unfold within it and doom both him and everything in it.

In the alternate reality where Site-13 comes from, the SCP Foundation is much more cruel and evil, as the focus of the Foundation is to perform sick experiments, rather than safely contain anomalies. These experiments involve dissolving innocent people into a black sludge, which is then poured into a pit known as "the body pit", with the liquid becoming increasingly more noxious. With Elliot Emerson being the aforementioned Site Director, he is the one behind the events of said experiments.

There was at least one doctor at Site-13 that had a sound sense of morality, Dr. Hadley, who would one day be fed up with the sick experiments being done and put an end to the horrors within the Site. Dr. Emerson ordered termination of an entire humanoid wing of the Site, which included an anomalous young boy - a boy that needed to feed by sucking the blood of others. Dr. Hadley, however, alters this plan by causing a mass containment breach. Dr. Hadley had also made sure to make "the body pit" liquids as toxic as possible, which would cause once experimented entities emerge out and wreak wrathful havoc on the very people that experimented on them.

Dr. Hadley, as a last resort to rid his world of the horrors of the Site, activated a device known as "THRESHER". This caused the Site to be teleported from its original reality and into the one of the SCP Foundation the current mythos follows. The THRESHER had some very reality warping side effects, turning the Site into an extremely dangerous, decrepit and run-down building with undead entities roaming around, filled with hate for the Foundation.

Many teams were sent into the building, resulting in many casualties. One team even comes across Bobble the Clown. The last team sent into Site-13 comes across the most dangerous creature yet, which is explained as follows:

The primary structure of the entity is a floating, cross-legged, humanoid construct with six legs, eighteen arms, and thirty-six forearms attached to seventy-two hands. Each limb moves independently, gesturing and posing in constant, sudden, jerking movements. The entity does not have a head, but instead has a large, flat, circular structure attached to its upper chest that is covered in a large number of symbols and glyphs Most notably, a single severely emaciated, severely charred human figure is bound to the flat circular structure of the entity’s head. This figure twists against its restraints, and appears to be screaming. As the entity performs its gestures, the glyphs on its head illuminate rapidly, often causing burns where the human’s skin comes in contact with them, creating further distress and increasing the volume of the whining.

The person attached to this entity is none other than Dr. Elliot Emerson himself, trapped in eternal suffering on this creature. The final team sent into the site manage to destroy Site-13, leaving the fate of the anomalous creatures, lost team members, the multi-jointed floating creature and Dr. Emerson a mystery.

Dr. Elliot Emerson is shown to be one of the most cruel and sadistic characters within the SCP mythos. Not only did he perform excruciating experiments on others, but being the Site Director, pushed others into doing them as well. Emerson also took great pleasure in the suffering of others, not showing even the smallest amount of remorse for those he experimented on. The only respect he shows to anyone are possibly some of his employees, but it can be assumed that he only respects those who agrees with him or blindly follows his orders. 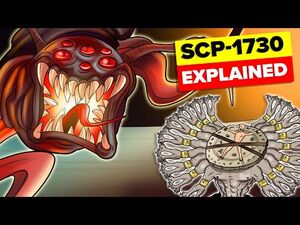 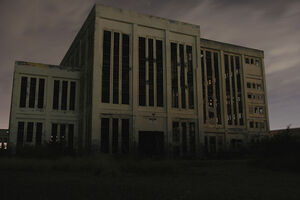 The building where the events took place. This is the building in the standard SCP timeline, not the one it teleported from.