Kipo and the Age of Wonderbeasts

Leader of the Human Resistance

Working on a cure for Mutes.

Create a cure for the Mutes (succeeded).

Exterminate all of the Mutes.
Kill Kipo Oak, her friends, and family.
Rule over the land under her own order (all failed).

She was voiced by Amy Landecker.

She and her brother Liam were residents of the DNA Burrow. Both of them were constantly pushed by their strict father to succeed in their work to reclaim the world from the Mutes. After they ventured to acquire some Mute DNA for experiments, Liam met Brad and Amy, two mute rats. Liam began to have second thoughts and Emilia killed him in order to prevent him from spreading his ideals about the Mutes. When she returned home, Emilia lied to residents, claiming that Liam was killed by mutes and not herself.

Emilia and among other scientists kept working on to finding a "cure" to the mute mutagen, so they could turn all of them back into animals. Emilia tasked Lio and Song Oak to isolating the mutagen. The two scientists succeeded when they turned a mandrill named Hugo into an intelligent Mute but keep it a secret from Emilia when they realized the consequences if their breakthrough were to become known. However, Emilia found out and later discovered that Hugo possessed mind-controlling pheromones when he splashed some on a another scientist in self-defense. Emilia then imprisoned Hugo, forcing him to run on a treadmill to harvest his pheromones and used them as a leverage to force Lio and Song to further their research in developing a mute "cure". After Lio and Song had a baby named it Kipo, Emilia confronts the couple about infusing Kipo's DNA with mute jaguar DNA. She attempted to kill Kipo but failed after Lio manage to escape with his infant daughter while Song stayed and transformed into a six-armed, giant mega monkey. Emilia used her supply of pheromones that she harvested from Hugo to take control of Song and used her as a weapon.

Emilia spent years tracking down Kipo while trying to find a solution to turn all mutes back into their original selves and restore the human race. She leads a group of human followers to help her with her goals. She manages to find Kipo and convince her to come back with her to her headquarters and plans to use her to defeat Hugo, now called Scarlemagne and kill her. After Kipo and her friends find out Emilia's true nature, they blow up a nectar bomb to trap and Emilia's followers in a tunnel from reached to Scarlemagne's coronation. Emilia engages in battle with Dave, Benson, and Mandu and waited for Kipo who she helped the humans under Scarlemagne's control. Emilia convinces the human group to follow her to archive her goal of revert all of the Mutes back to their original selves.

For months, Kipo and her friends search for Emilia and eventually realize that she and her followers had been hiding on a cruise ship. Kipo tries to band all humans and mutes together to stop Emilia. However, due to the distrust in the mute community, Emilia makes things worst by kidnapping Mutes and manipulating the other humans into believe everything she says and helping her attack the mutes. After Kipo bands everyone together at a party, Emilia takes the opportunity to ruin the party by releasing the cure via fireworks. However, after her plan fails and most of her followers turn against her, She injects herself with a serum and transform into a Mega Mute and attacks everyone. Kipo and her allies fight Emilia who kills Scarlemagne after he sacrifices himself. Soon after, Emilia loses control over her mega mute form and retreats to the ruins of her old burrow. After getting cured and reverting back to her normal self, Emilia is offered the chance to join Kipo and her community. Emilia tries to kill Kipo but Mandu appears and bites Emilia's arm, causing her to fall into the burrow and become imprisoned by a mute fungus named Fun Gus. Kipo and her friends decide that this would be a fitting punishment for her. 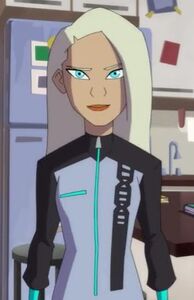 A younger Emilia.
Add a photo to this gallery
Retrieved from "https://villains.fandom.com/wiki/Dr._Emilia?oldid=4073353"
Community content is available under CC-BY-SA unless otherwise noted.