Villains Wiki
Register
Don't have an account?
Sign In
Advertisement
in: Mature, Male, Doctors and Scientists,
and 26 more

Contain the virus from spreading.

Devour Sarah Bowman and her group and spread the virus (both failed).

Dr. Engel is the main antagonist of the 2008 horror film, Day of the Dead. He is the director of the government project called "Wildfire" and became infected after an accident occurs, spreading the virus through Leadville, Colorado.

He was portrayed by Pat Kilbane.

Prior to the movie's events, Dr. Engel was in charge of a project called "Wildfire", which was designed to paralyze enemy troops by shutting down their neural system for six to seven hours, intended to save lives instead of killing anyone. However, the project went wrong and mutated, turning anyone who was infected into a rampaging flesh-eating monster. Engel killed others that were infected and were managed to get bitten. Engel tries to seal himself inside of a room after getting infected. However, his plan fails as he turned and busted the door down and spread the virus through Leadville.

At the beginning of the film, Trevor and his girlfriend, Nina, have a romantic encounter in an abandoned building. After exploring the building, their friends, Kyle and his girlfriend leave, but the girlfriend gets blood on his chest from Kyle nosebleed, getting the infection from his mother. As Kyle's girlfriends walk home in the forest, she is chased and killed by Dr. Engel.

As the town was overwhelmed by the undead, Sarah and her group headed through the forest and back to the abandoned warehouse from the beginning of the film. As they explore the building, they find an underground bunker. Once the group split into two groups, Sarah and Salazar find Dr. Logan and demand answers from him on what happened to the townspeople. Trevor and Nina found a recording of Dr. Engel, who explained about the project called "Wildfire", which accidentally created the virus that turned the townspeople into zombies. As the recording ends, Engel turned and breaks down the door and spreads the infection.

Trying to find a way out of the warehouse, they hear a monstrous sound and went to kill the zombie. Turning on the lights, they stumble upon a zombified Engel and tried to kill him. But he dodges the bullets and headed into the vents. Walking down the halls, Engel grabs Logan and kills him. After Salazar is swarmed and killed by the zombies, Sarah escapes and reunites with Trevor and Nina and found large gas cylinders, deciding to kill the zombies by burning them.

Sarah tries to lead the zombies to the storeroom, Engel drops down from the ceiling and grabs Sarah from behind. Before he could infect her, the zombified Bud tries to use his gun to kill Engel, but he is then dismembered by them and having his head grabbed by Engel, who throws it to the wall. Sarah then gets their attention and leads them to the room where Trevor and Nina were hiding. As they modify the cylinders into a giant flamethrower, they torched Engel and the other zombies, killing them in the process. 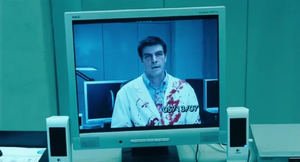 Dr. Engel before the infection.