Villains Wiki
Register
Don't have an account?
Sign In
Advertisement
in: Female, Doctors and Scientists, Supernatural Villains,
and 10 more

Dr. Erica Cartwright is a minor villainess in the Season 5 episode "Sam, Interrupted" of Supernatural.

She was portrayed by Michelle Harrison who also portrayed the Speed Force in The Flash.

After the brothers instill themselves as patients in a mental hospital, Dean is approached by Dr. Erica Cartwright, who was assigned solely to him. She encounters Dean two more times while he is on his mission:  looking for a wraith who has been preying on patients. However, Dr. Cartwright is revealed to be just an illusion in Dean's mind; created by the actual wraith, who is later revealed to be Nurse Foreman. This was discovered when Dr. Cartwright mentions that Dean can't even save himself, and brings up moments from Dean and Sam's past; including Dean breaking the first seal that led to Lucifer's release. A janitor hears Dean's argument and reveals that he's not talking to anyone; all the while, Dr. Cartwright smirks evilly at Dean as she taunts him once more before disappearing for good. 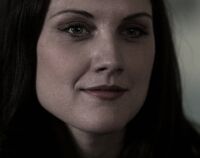