Sending out assassins.
Inventing machines and traps (all formerly).
Playing the piano.

He is the head of a criminal organization with the intention of taking over the world, the son of Nigel Powers, the archenemy and long-lost brother of main protagonist Austin Powers and the father of Scott Evil. He is also a parody of Ernst Stavro Blofeld, the archenemy of James Bond in the 007 films and novels.

He was portrayed by Mike Myers, who also played the title character in all three films, as well as Fat Bastard and Goldmember.

In Dr. Evil's absence, his organization, Virtucon, continued to grow economically to fund their evil deeds and kept several parties employed. His companies fared so well even that one company alone made several times more than the evil doctor originally intended to ransom the entire world. Also during his absence, Dr. Evil's son Scott was born.

Dr. Evil was unfrozen 30 years later in 1997 and continued his plans.

He also has a clone named Mini-Me, who is significantly shorter than him introduced in the second movie.

In the third movie, it is revealed that he is in fact Austin Powers' twin brother, Douglas (or "Dougie") and Nigel Powers' second son, and the two team up to stop van der Smut. In the end, both Dr. Evil and Mini-me are reformed with Scott Evil, his son, being in command of his evil organization, and Goldmember being the real destroyer.

Although many aspects of his life are unknown, some details are revealed by the doctor in a group therapy session from the original movie:

In the third movie, it is revealed that Nigel Powers is his father and Dr Evil is Douglas Powers, Nigel's other son and Austin's twin brother. One day his family drove for a trip to Beligum, where Nigel stopped in the field to relieve himself, when the family car exploded, killing Austin and Douglas' mother. Nigel assumed only Austin had survived the explosion. Douglas survived only because Mrs. Powers' corpse shielded him from the blast. Nigel also told him it was no accident, but an assassination attempt. Douglas was found by two Belgians, who raised him into the evil person he is today.

Despite his intelligence, he got several unintelligent ideas mainly in his schemes has mostly flaws in them.

Dr. Evil has three testicles, this was revealed when Mini Me lowered the globe during a demonstration accidentally hitting Dr. Evil in the crotch. After reacting in agony, he announced he had to check his balls and counted three.

Dr. Evil's projects for world domination are often named after pop culture trademarks (Death Star, The Alan Parsons Project, Preparation H) and he is often unaware of the accidental pun. For example, when Dr. Evil says he will turn the moon into a "Death Star" (said with finger quotes), Scott laughs and calls him "Darth". Scott also coughs and mutters "Rip-off!" After a slight pause, his father says, "Bless you."

Dr. Evil varies in how real he makes his threats out to be. When he makes his threat of causing all the volcanoes in the world to erupt at once, all he does is display his machinery, something of an homage to Thunderball. When he makes the threat of "Death Star", he "demonstrates" the power of his laser by showing the President and the cabinet footage of the White House being destroyed. After the President and the cabinet realize they're still alive, he says "Well actually that was just footage from the movie Independence Day, but the real laser would be a lot like that". With his threat of flooding the world, he shows that the tractor beam is real by pulling down a satellite that looks like a pair of breasts.

Dr. Evil seems to have a problem in general with understanding world economy and money, especially regarding the modern American economy and inflation. In the first film, he intends to hold the world ransom for one million dollars, but doesn't understand that it isn't as large a sum of money as it was in the 1960s, because of inflation, and the demand causes the U.N. to burst out laughing. In the second film, Dr. Evil goes back to 1969 and plans to hold the world ransom for $100 billion, and when he tells the amount to the President, he receives a similar reaction as in the first film when the President and his cabinet laugh at him. In the second film, Dr. Evil says, "Why make trillions when we can make... BILLIONS?" not knowing that trillions are larger than billions. In the third movie, he demands "1 billion, gagillion, fafillion, shabolubalu million illion yillion... yen". This time his demand is met with simple confusion from the world leaders. In his first film, his other idiotic schemes include a threat to destroy the ozone layer and make a scandal of Prince Charles' marriage, humorously unaware that these were both major issues recently and have since subsided.

One of Dr. Evil's greatest desires is to have "frickin' sharks with frickin' laser beams attached to their frickin' heads," and is disappointed when he can't have the sharks because of laws on endangered species. Instead, Number 2 gives him mutated sea bass, which Dr. Evil grudgingly accepts, muttering "Well, it's a start" (they were ill-tempered, as the bass do manage to eat the head of one unfortunate henchman hired by Dr. Evil, who was having a stag party at Hooters that was informed of his death). Scott however, manages to get him said sharks in the third film as a father-son gift.

Dr. Evil can't resist cracking puns at his own work (he says his submarine lair is "long and hard and full of seamen"). As with Auric Goldfinger, he creates models of his plans, worried that they are too complicated for his minions to understand. He also cares nothing for the companies (Virtucon, Starbucks, Hollywood Talent Agency) that fund his plans, ignoring all suggestions from Number 2 on how to increase the profit of such companies honestly. Although he was impressed that Number 2's Hollywood Talent Agency was able to recruit celebrities such as George Clooney, Julia Roberts, and Leonardo DiCaprio. 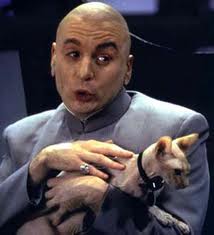 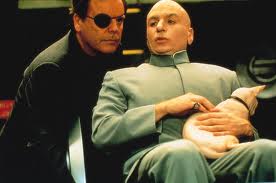 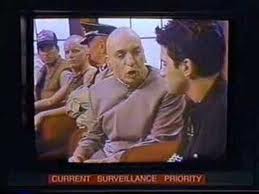 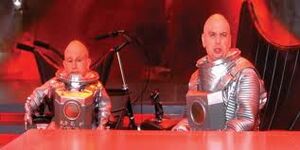 Dr. Evil and Mini Me in Space suits. 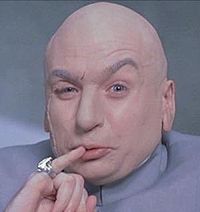 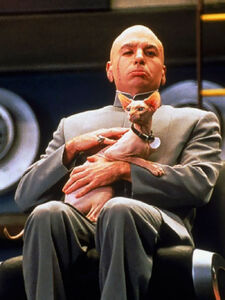 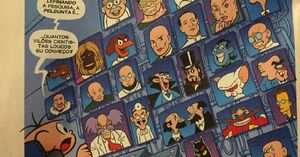 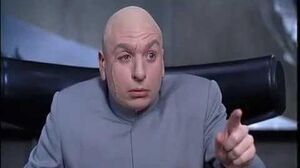 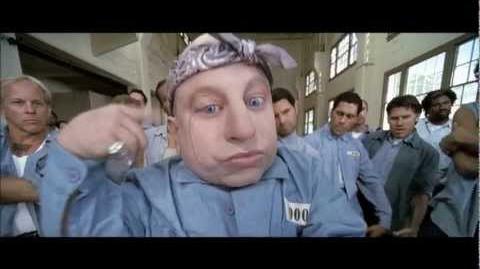 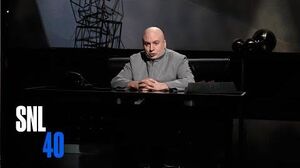