Agent of The Lords of Order

Save Black Canary from death.

Stop Trigon and Mister Mxyzptlk from tearing reality apart (both succeeded).
Ensure that Brainiac destroys the world as it will "bring order to chaos" (formerly: failed).
Do whatever it takes to save humanity (even if it means disobeying the Lords of Order; succeeded).

Dr. Fate, real name Kent Nelson, is a twisted alternate version of the heroic main-universe Dr. Fate and an anti-villain in Injustice 2.

Like most incarnations of the DC Comics hero, he is made up of two individuals, a human host, namely Kent Nelson, and the god Nabu. Unlike previous incarnations of Dr. Fate who are wise and just, this version is bitter, cynical and has utterly lost faith in humanity and the other heroes, as have the Lords of Fate, though his mortal host Kent Nelson tries to fight back.

He is voiced by David Sobolov, who also voiced Shockwave in Transformers Prime, Blitzwing in Bumblebee, The Annihilator in Mighty Med, Gorilla Grodd in The Flash, Volibear in League of Legends, Lobo in Young Justice, Dale Deseeko in The Regular Show, Ripa 'Moramee in Halo Wars, and Kaido in One Piece.

Doctor Fate plays an important role in the comics especially during Year Three of Injustice: Gods Among Us. Near the end of Year Two, he saved a near-death Black Canary by altering her fate and transporting her in an alternate universe where an another universe Green Arrow lost his own Black Canary 5 years ago.

During Year Three, he and other magic users have relocated the Insurgents into the Tower of Fate, away from the Regime as their base of operations. When John Constantine summoned Trigon and Mister Mxyzptlk reveals himself as the imposer Spectre working with Superman, the two battled together however their immense powers are tearing reality apart. With the help of Shazam, he uses his lightning to redirect to the two, transporting them in an another dimension, ending their terror once and for all.

Fate first appears in Green Arrow and Black Canary's chapter, where he warns that a great darkness is coming and he doubts he can stop it. He also tells them that Gorilla Grodd (Whom Arrow and Canary had come to confront) is but a pawn of a greater master and that a new order is coming, one that Fate has foreseen. He orders both heroes to come with him while they still have a chance. The married heroes, however, refuse, claiming their loyalty to Batman. Fate tells them that everyone and everything they know will die and that they will come with him, even if he must resort to force.

Either Arrow or Canary defeats him and removes his helmet, putting Kent in control again. Kent explains that he has lost control of Nabu and that he must implore The Lords of Order to aid humanity. When Arrow and Canary ask Kent what is going on, Kent reveals that the Lord's magic prevents him from saying more because he has changed fate too many times and that Earth's fate is no longer clear. Kent dons the helmet again, and Fate explains that mere mortals cannot stop the threat and that Earth's fate is in the Gods hands. He then teleports away.

Kent is seen wandering the streets of a ruined Metropolis and sees buildings being absorbed by Brainiac's ship a dying woman begging for help. He tries to help her, but Nabu orders him to stop, causing the woman to die. Distraught, Kent asks why he can't stop this, why won't Nabu let Kent fight back, and how could there be order if Brainiac wins. Nabu tells Kent that humanity breeds chaos and that Brainiac has order.

Later, as Batman and Superman storm Brainiac's ship, Fate appears to them and accuses both of them of bringing chaos to the universe and that Brainiac will correct their mistakes. Either Batman or Superman can fight Fate and in the end, Superman crushes Nabu's helmet, destroying the god and freeing Kent from the Lords of Order. Kent implores Batman and Superman to work together to defeat Brainiac or else the Lords of Order will impose order themselves. Before he can finish his warning though, Brainiac kills Dr. Fate by killing him with one of his tentacles before absorbing him into the ship. 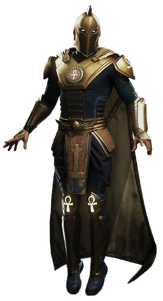 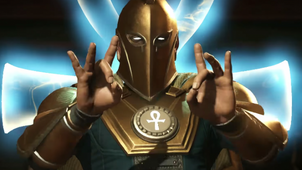