Having sex with earthlings

To create the perfect man and stay on Earth to have sex with earthlings.

Dr. Frank-N-Furter is the main antagonist of the 2016 film The Rocky Horror Picture Show: Let's Do the Time Warp Again, which is a remake of the original film of the same name.

She was portrayed by Laverne Cox.

Dr. Frank-N-Furter is an alien from the planet of Transsexual Transylvania. She is sent to Earth with an unknown mission and lives in an old movie theater with her minions Riff Raff and Magenta, as well as groupie Columbia.

She is hosting the annual Transylvanian convention, with several Transylvanians there as party guests. It also means to show the Transylvanians her creation, Rocky. After making her first appearance singing 'Sweet Transvestite' she returns to her lab in wait for Brad and Janet. Once they arrive she greets them with mild flirting before making a speech to the Transylvanians about her work. She then proceeds to create Rocky.

She sings a brief song about her success, 'I Can Make You a Man', and is then interrupted by Eddie, a former delivery boy whose brain she split to help create Rocky. Eddie sings 'Hot Patootie' during which Rocky begins to dance. Frank, becoming jealous, stabs Eddie with a knife multiple times and pushes him out of a window to his death, and then sings 'I Can Make You a Man Reprise' before going to a bridal suite with Rocky. She manages to seduce both Brad and Janet after leaving the bridal suite, the other Transylvanians have left, and even manages to convince them to have sex with her.

Later on, Brad and Janet's ex tutor Dr. Everett Scott turns up at the castle and Frank is immediately suspicious of him, thinking that Dr. Scott is a member of the FBI searching for aliens. Frank believes Brad and Janet had a hand in Dr. Scott's arrival and then they hear Janet and Rocky Horror sleeping together. Frank is furious and Magenta comes in to alert them that dinner is prepared. Dinner is served to all while Dr. Scott asks about Eddie, as he is his uncle. Dr. Scott sings about Eddie, 'Eddie's Teddy', before Frank pulls away the tablecloth to reveal that their dinner was made of Eddie's dismembered remains. Janet runs screaming to Rocky, who comforts her and Frank once again becomes jealous and chases a still screaming Janet through the castle and up to the lab, with Brad and Dr. Scott following them. She then uses a self made device that turns freezes people on Brad, Janet and Dr. Scott. Columbia arrives and gives a speech about Frank's treatment of people and she freezes her as well. Frank has a short conversation with Riff Raff and Magenta, then tells them to prepare for the Floor Show, but Magenta stops Riff Raff and decides to betray Frank.

In the castle's theater Frank has dressed up Columbia, Rocky, Brad and Janet in a golden outfits and unfreezes them one by one while they sing a song, 'Rose Tint my World'. Frank then comes in with her own song which, halfway through, consists of her and the other four going into a pool to sing and kiss.

Frank then kicks up the tempo with 'Wild and Untamed Thing' until Riff Raff and Magenta, wearing futuristic space suits, break up the show saying they are to return to their home planet of Transsexual in the galaxy of Transylvania. Frank is astounded and sings 'I'm Going Home' to try and change Riff Raff's mind. The attempt, however, fails and Riff Raff announces that Frank is to be killed by the laser which he is carrying. After killing Columbia, Riff Raff shoots Frank and then Rocky as well. Dr. Frank N. Furter's body is most likely taken back to Transsexual along with the castle when Riff Raff and Magenta return home. 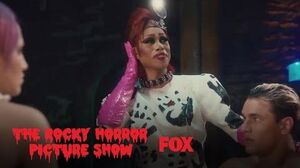 Retrieved from "https://villains.fandom.com/wiki/Dr._Frank-N-Furter_(Remake)?oldid=3407731"
Community content is available under CC-BY-SA unless otherwise noted.