Villains Wiki
Register
Don't have an account?
Sign In
Advertisement
in: Tom Turbo Villains, Criminals, Doctors and Scientists,
and 3 more

Mad Scientist
Dr. Frankenschrei was a recurring villain in the Austrian TV-show Die heiße Spur, later renamed into Tom Turbo. He is a crazy scientist who is mostly known for his attempt to rebuild the talking bike Tom Turbo into a car monster.

Dr. Frankenschrei makes his debut in a two-parter episode revolving around another villain, Diamantenzahn. The latter kidnaps a boy Tom Turbo and his boss Thomas are friends with and demands that Tom finds Dr. Frankenschrei's lair and bring him a helmet the scientist created. Frankenschrei pretends to be cooperative, but then locks Tom away and switches him off using a boomerang, planning to rebuild him into a car monster. While he takes Tom apart, Thomas is visited by Diamantenzahn who demands the helmet. After Thomas managed to get the villain out of his office, he uses a beam usually used to recharge Tom to put him back together as well as causing the boomerang Frankenschrei used to move on its own and chase the mad scientist until Tom is completely put together. Taking the helmet, Tom flies away, leaving Frankenschrei raging.

It is later revealed that the helmet can shrink people when Diamantenzahn uses it to shrink down Fritz Fantom and Dr. Gruselglatz so they turn off the alarm system in the house next to his so he can plunder it.

At one point, Frankenschrei kidnaps the villainous inventor Rudi Rat and has him add jaws and a speech chip to stolen skateboards so they can threaten people and demand money. Rudi uses one opportunity to manipulate a speech chip so the skateboard calls for help, hoping that some one will help him. Frankenschrei notices this and steals more skates as well as the one Rudi reprogrammed. Knowing that Tom Turbo, who he met earlier when being disguised, is listening, Frankenschrei claims that he has too look after the oil, as this is Tom's favourite drink. However Thomas realized that they are and it's a trap. Tom pretends to be about to drink the oil, but jumps into the air when Frankenschrei attacks from behind and lands on top of him when the scientist fell down. Frankenschrei tells Tom that it's still useless and activates the skateboards, causing them to chase and rob people across the streets. Rudi Rat sees this as a chance to escape and runs away. Tom takes the remote control and leaves. Frankenschrei tries to follow him in his car, but Tom had left the car's lights on to empty battery, rendering the car useless. Tom Turbo switches the skateboards off while Frankenschrei remains in his car, raging.

Another time, he disguises himself and kidnaps school kids in the science museum and puts yellow shoes on them. Later, when Tom found the kids and released them, Frankenschrei mumbles that this doesn't matter as he wanted to wake the kids anyway. He was then chased by Tom before revealing himself as Dr. Frankenschrei. He activates the shoes, causing the children to push out everyone else out of the museum. His plan is to plunder it once it's empty. However, the kids push him out as well, Frankenschrei loosing the remote control for the shoes in the process and being unable to stop them. Tom then uses the control to turn off the shoes. Frankenschrei remains outside the museum, banging at the door and demanding to be let in, threating Tom to take him apart if he doesn't, however it's to no avail.

Hearing that Dr. Gruselglatz sent his assistant Igor to hide a chicken that can open the door to a room containing Dr. Gruselglatz's new invention, a chemical that can melt ice in seconds, at a farm, Frankenschrei is unable to find the chicken among the others and decides to use Tom Turbo. To do so, he places exploding eggs in Benny's house and later allows the flying camera of a papparazo to film him, pretending that he's working on a dangerous chicken and "realizing" that it escaped. When Tom found a special chicken, Frankenschrei hears about it in the news and takes his motor bike to get the farm. Tom, who is already on his way with the chicken stops him by plugging his motor bike's tailpipe. 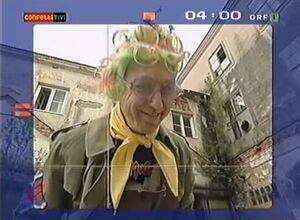 Dr. Frankenschrei pretending to be friendly and willing to help Tom. 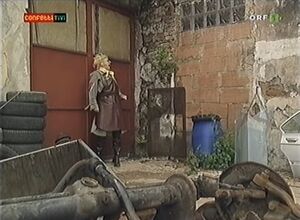 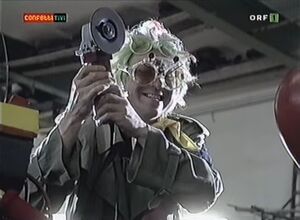 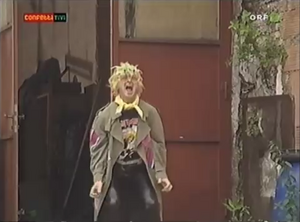