Creator of the Red Ribbon Androids

Conquer the world. (both failed).

Dr. Maki Gero, also known as Android 20, is a major antagonist in the Dragon Ball franchise. He is an evil genius scientist and a brilliant weapons designer behind the criminal organization known as the Red Ribbon Army. As an android, he can drain energy from people through a device on his hand. Being the one responsible for creating the androids and Cell, as well as Super 17. He is also the creator of Android 21 who was originally the mother of his son.

He was voiced by the late Kōji Yada in the Japanese version, and Kent Williams in the English version.

Maki Gero was the chief scientist of the Red Ribbon Army (though he is never seen or even mentioned at the time) that created the first androids in the service of the Red Ribbon Army. In the anime, Dr. Flappe (who looks nothing like Dr. Gero) is named as Android 8's creator. A possible explanation is that Flappe and Gero were partners and constructed the first androids together (most likely including Android 8) or that Flappe merely constructed Android 8 while Gero produced the blueprints and forced him to create him (most likely the latter as Flappe was hinted at being a Red Ribbon member against his own will).Akira confirmed them to be partners and he modeled Android 16 after his late son who was a high-ranking member who died in a gunfire.

After the Red Ribbon Army was defeated by Son Goku, Gero went into hiding in a mountain area that was north of North City where his laboratory was located. In this lab, he strived to create the ultimate fighting machine. Using an extremely intelligent tracking device disguised as a ladybug, he studied Goku and the Z Warriors for years on end: the fights Goku had with Tenshinhan, Piccolo Daimao, Piccolo, and the Saiyans, Raditz, Nappa and Vegeta.

Dr. Gero ceased the study of Goku's power when the Saiyan left for Planet Namek, believing he had already compiled enough information; so he simply adjusted the androids' power levels to accommodate to Goku's expected power increase, not accounting for the power level of Goku's Super Saiyan form. Believing he had created the ultimate fighting machines, he finalized his plans and constructed a series of Artificial Humans (Androids). Later using all of the cells from the world's greatest fighters to create his ultimate android, Cell.

Dr. Gero sought revenge on Son Goku, so he studied Goku and all his fights on Earth, including his fight with Nappa and Vegeta. He built androids with as much power as an army so they could defeat Goku. It is said by Trunks that the androids killed Dr. Gero when they awakened (as this was what happened in his timeline). However, this did not immediately happen, as Gero awakened Android 19, who made him into Android 20. They attacked a city where Goku and the other Z Fighters (minus Vegeta and Chaozu) were waiting for them. 20 destroyed a city to prevent the people from getting in the way of their fight. In a deserted area, 20 sent 19 after Goku, who then became crippled with a heart virus, and was forced to leave with Yamcha.

After Vegeta arrived and destroyed 19, 20 ran, deciding to steal energy from the other Z Fighters so he would be strong enough to defeat Vegeta. He targeted Piccolo first, but Son Gohan stopped him, and Piccolo beat up 20, cutting off his hand. However, Trunks showed up and revealed that 19 and #20 were not the androids from his timeline, but Artificial Humans 17 and 18 were. 20 retreated to his lab, but attacked a man along the way who shot at him mistaking him for a deer, leading Kuririn to fight him. They followed him to his lab where he awakened 17 and 18, who disliked being controlled and took his remote and crushed it. 20 tried to stop 17 and 18 awakening Android 16, saying it was too dangerous to awaken him. 17 then impaled him with his hand surprising everyone, and kicked his head off. He survived, so 17 stomped on his head, crushing it.

Dr. Gero's master computer was creating an ultimate android Cell from the cells of Goku, Son Gohan, Piccolo, Yamcha, Tenshinhan, Chaozu, Vegeta, Nappa, Freeza, and King Cold, which Gero had extracted using an insect-like device. In Cell's timeline (and possibly Trunks' timeline as well), Gero was killed when 17 cut his head off and 18 destroyed his head after he said Cell would swallow them up. In the regular timeline, the master computer and Cell in his larval form were destroyed by Kuririn and Trunks.

He later appeared in Hell alongside several other dead villains during the Pure Boo Saga, watching Goku's fight with Pure Majin Boo.

He also appeared in the movie Super Android 13, during his death at the hands of Android 17 (though the dialogue is changed), with his master computer programmed to think it was Dr. Gero, and it finished building Androids 13, 14, and 15. In the anime (as most of the movies are non-canon) it is said by 18 that all androids up to 15 were destroyed by Gero (excluding Android 8, as Gero never built him).

Dr. Gero and Dr. Myuu worked together to build another Android 17 in Hell, brainwashing the original #17 (who was no longer evil) to open up a portal from Hell which most of the dead villains escaped. The two 17s fused together into Super 17. Gero was betrayed and killed by Super 17 with an energy wave.

Despite his death Gero actually impacts the story due to his creations. Anrdroid 16 was based on his son and Android 21 implied to have been his wife and the mother of his son was turned into a bio android for unknown reasons who served as the main villain of the video game Dragon Ball Fighterz. He also created Cell who was the main villain of the android saga through his supercomputer. Android 17 and 18 also caused devastation in Future trunks's timeline. Even in non canon materiel Gero's supercomputer managed to unleash Android 13, Android 14, and Android 15. His influence also caused Zamasu to invade Future Trunks's timeline in Superand in GT teamed up with Dr. Myu to unleashed Super 17. The Only villains who more impact on the story than Gero are Frieza and Zamasu/Goku Black. He assisted the rise of the red Ribbon Army and created Android 8.

When he first appeared, he and Android 19 attacked two male prostitutes and a random guy in a car and mistook Yamcha for Goku before brutally beating and impaling him. When the Z warriors and Goku showed up, they quickly corrected their mistake and Gero attacks the city with blasts, before Goku punched him in the cheek, unintentionally hitting the off switch for the blasts. After "destroying" the city (he actually only blew up a small portion of it and the Z warriors, specifically Piccolo, pretended he had to prevent him from hurting more people) Gero and 19 went to a empty desert to fight the Z warriors. Before the fight, he informed the warriors on how he had been monitoring them for years and had calculated they're capabilities into his and 19's programming, only to state that he didn't follow them to Namek after Piccolo asked him if he did, following up by asking him if he knew what a Super-Saiyan was. After witnessing Goku's transformation, he had 19 load his Murder.ExE program, only for it to encounter a unexpected error and accidentally send a report, he orders the Z warriors to wait for 19 to properly function, right before Goku hits 19 in the face.

During Goku and 19's fight, Gero spent his time yelling at 19, trying to get his Murder.ExE program to work properly while Goku was mercilessly beating him and was frustrated at how even the simple act of dodging need a large load-time. Gero took immense satisfaction when 19 started to work and Goku suffered a heart attack, only to be upset when Vegeta showed up and went Super-Saiyan, angrily shouting "SERIOUSLY, WHAT THE F*** IS NAMEK???!!!", and effortlessly killed him, causing him to run away. Vegeta and the other warriors went on the search for him and he snuck up behind Piccolo and sapped his energy, only to be kicked by Gohan, who saw them floating in the sky. He then fought Piccolo who easily countered his attacks and mocked his poor choices and design work, like his pointless and idiotic inclusion of pain receptors, he escaped by shooting down Bulma after Trunks accidentally distracted everyone.

He immediately went back to his lair and awoke 17 and 18, only to be followed by the Z warriors, who witnessed his death at the hands of the rebellious cyborgs (everyone else, except Cell, incorrectly refers to them as androids).

He reappears in the "Super Android 13" movie, which starts directly after his death in episode 38, in which his blood drips down in to his super computer, which was programmed to think like him. He rebuilds and reactivates his failures 15, 14 and 13 and sends them to kill Goku, his friends and most likely the other androids. He is killed when Krillin and Trunks show up to destroy his underground lab, meaning that this episode takes place between episode 40 and 41, even though that is obviously impossible.

Dr. Gero is a cold-hearted and merciless man who is willing to stop at nothing to achieve his goals, he doesn't let people get in his way, and even kidnaps other people to use for his experiments. He also holds a strong grudge against Goku due to him destroyed the entire Red Ribbon Army. He has the utmost confidence in his technological skills and intellect, as he believes, even when the odds are against him, that he, or his creations, will succeed somehow. Gero also trusts his creations with his life, believing now that he has "improved" them, they will respect him as their master. However despite his cold heart, he is capable of some affection, as he modeled Android 16 after his deceased son and deliberately made 16 gentle in order to avoid the risk of him being destroyed in battle. As he is unable to bear the thought of that happening.

However, he had trouble with his creations, Android 17 and Android 18, for disobeying him due to them being arrogant and rude. Arguably, he can also be quite hypocritical and self-righteous, because even if he despised Son Goku for destroying the Red Ribbon Army for 20 years he used the Z-Fighters, Frieza and King Cold's DNA's to create Cell, whether this occurred before or after Son Goku destroyed the Red Ribbon is debatable.

Before his conversion into an Android, Dr. Gero had no real fighting attributes. However, he has seemingly superhuman intelligence. After becoming Android #20, Gero can now fly, is superhumanly strong and fast, and can both manipulate and absorb Ki Energy.

He does seem to have at least above average tactical prowress, as he made a plan to eliminate all his opponents by steadily killing them through absorption. Along with that, he took advantage of Bulmas unexpected arrival to escape through blasting her aircraft.

An extremely powerful eye laser fired from both eyes. Capable of easily eliminating a city in several shots.

A variation of the Full Power Energy Cannon in the form of a purple Energy Wave.

Android #20 claws the opponent up into the air. Then, he jumps up to grab the opponent by their leg and throws them away. Finally, Dr. Gero teleports behind the opponent to knee the opponent twice down to the ground, inflicting a great deal of damage. 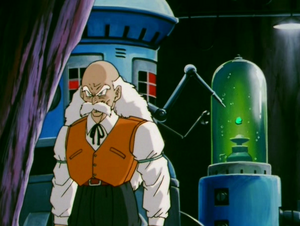 Dr. Maki Gero in his original human form before he became Android 20. 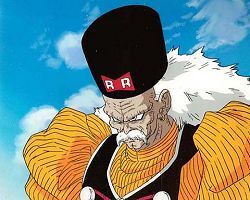 Dr. Gero
Add a photo to this gallery

Retrieved from "https://villains.fandom.com/wiki/Dr._Gero?oldid=4122752"
Community content is available under CC-BY-SA unless otherwise noted.