Make The Monarch happy
Be a successful supervillainess.

Dr. Mrs. The Monarch, formerly known as Dr. Girlfriend, is a major antagonist in The Venture Bros. She is known by several names. She is the assistant and wife of The Monarch. Her real name is Sheila. Despite the fact she is clearly a woman, there are rumors that she is transsexual due to her deep voice (which is the result of a smoking addiction since 1989). There were times where she tried to start the life as an independent supervillain, but to little avail. She has her own henchmen, named Tim-Tom and Kevin.

Currently, she is also a member of the new Council of Thirteen.

She was introduced into the world of supervillainy by her former lover Hamilton Fantamos and took her place by his side. She fell in love with one of his henchmen, who back then was the Monarch, before he started his career. They had an affair and she eventually left Phantom Limb for him. By the time The Monarch started his career, they spent their time antagonizing Dr. Rusty Venture,  and she was even used to attempt to seduce him. Near the end of the first season, they break up and she goes back to the Phantom Limb.

It turns out the Monarch was framed by the Phantom Limb for the murder of a police officer. This was both an act of revenge and an part of a scheme to takeover the Guild of Calamitis Intent. The Monarch's innocence is proven and eventually, Dr. Girlfriend starts having an affair with him again and the two decide to get married.  The wedding is attacked by Phantom Limb's forces before Phantom Limb's plan crashes. The Monarch and Dr. Girlfriend go on their honeymoon shortly after.

Once married, the Guild assigns them as the archenemies of Jonas Venture, Jr., but The Monarch uses this as a loophole that allows supervillains to antagonize relatives of their nemesis. In season four, they help comfort Henchmen 21 after the death of his friend, Henchmen 24, molding him to be their top henchman, "Two Ton Twenty-One." 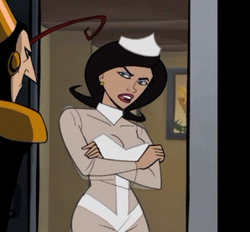 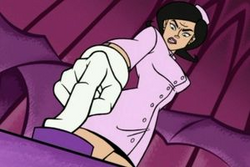 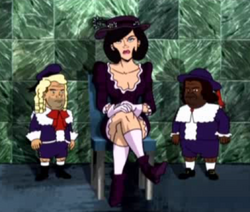 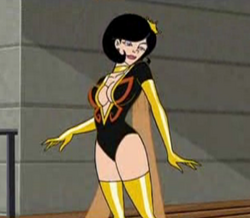 Dr, Girlfriend's latest look as "Dr. Mrs. The Monarch"
Add a photo to this gallery
Retrieved from "https://villains.fandom.com/wiki/Dr._Girlfriend?oldid=3113177"
Community content is available under CC-BY-SA unless otherwise noted.