Villains Wiki
Register
Don't have an account?
Sign In
Advertisement
in: Doctors and Scientists, Parody/Homage, Male,
and 26 more

He was voiced by John Cleese, who also played Cat R. Waul in An American Tail: Fievel Goes West. In the video game adaptation of the film, he was voiced by Gerold Wunstel.

A classic "mad scientist", Dr. Glickenstein is a cantankerous, cruel, and egotistical old man who regularly abuses and insults his henchman, Igor. Like all other mad scientists in Malaria, Glickenstein wishes to win King Malbert's contest with his evil inventions, it is unfortunate that he is not as smart as he thinks he is. According to Igor, his previous invention was an "Evil Lasagna", which failed to kill anyone (though it did taste pretty good).

Glickenstein's greatest weakness is his arrogance, which soon proved to be his downfall: during the construction of his latest invention (a weaponized rocket ship), Dr. Glickenstein discovers that Igor got two different transducers instead of only one - Igor suggests that the 21-gigawatt transducer would be safer, but Dr. Glickenstein blows him off completely, using the 16-gigawatt one instead. Shortly after turning on the rocket, it then explodes, killing Dr. Glickenstein and leaving behind nothing but his prosthetic arm.

Dr. Glickenstein was shown to have suffered from mother issues as his Mom called him a failure and suggested that he'd take up a plumbing job (which she also had). It is implied that this is what rooted his arrogant behavior, a need to prove himself to his disapproving parent. 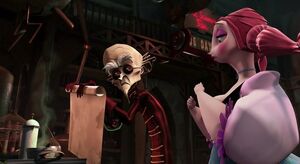 Dr. Glickenstein preventing Jaclyn (under the disguise of Heidi) from stealing his inventions. 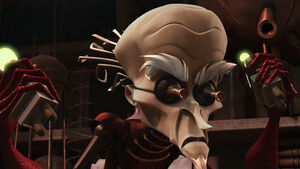