Stop hiders from leaving the islands.

Continue her dark Experiments (all failed).
Drag humans into a golden age.

She is a seemingly helpful yet incredibly twisted doctor whom once taught the remaining humans on the island, before becoming obsessed with cybernetic enhancement. She now wishes to bring humanity into a golden age through robotic modification with her hybrid army. She herself is a cyborg.

She was voiced by Lennon Parham.

Dr. Gross returns in the Islands miniseries in season 8 as the secondary antagonist, although only appearing in flashbacks. It is revealed that years before Finns birth, the doctor lived on an island far off the coast of Ooo with many other surviving humans. In this post Mushroom War society, Dr Gross taught students known as "seekers" to prevent "hiders" from leaving the island. She uses a song detailing the history of the humans, the islands founders and the dangers of leaving to brainwash the students into thinking that the outside world is too dangerous to survive.

One of her students is Kara (Susan Strong) or X-J-7-7. At one point Kara asks Dr. Gross for advice concerning her friend Frieda who wants to leave the island. The doctor reinforces the need to prevent those like Frieda from wanting to leave the island and eventually tracks the two down to the islands shores, where Susan is attempting to help Frieda to flee. She activates an electric signal which overrides Kara's free will and cause she to be under the doctors complete control. Dr. Gross orders Kara to destroy Frieda's boat preventing her from leaving, and the two leave with Frieda (who is presumably send to reeducation on the island).

Later in the miniseries, it is revealed by Minerva, Finn's mother, that after Finn and Martin Mertens' disappearance, Dr. Gross sent Kara out to retrieve them, but she never returned. As Minerva became more depressed and reserved, Dr. Gross' experiments become stranger and dangerous, eventually leading to the accidental release of a deadly virus which killed 62% of the islands population. Some time between this and the events of "Preboot" the doctor fled the island and arrived in Ooo to continue her villainous experiments. In the season 7 finale episode "Preboot" Finn, Jake and Susan Strong first encounter Dr. Gross after her ship digs through the ground and into Beautopia, where the protagonists have been investigating early human relics. Finn, Jake and Susan board the ship and soon reunite with Tiffany Oiler, who had been presumed dead from a previous episode.

Tiffany explains that Dr. Gross saved his life and even replaced his arm with a robotic one. Susan then becomes focused on finding the doctor and is able to open up a door revealing her, yet she fails to understand how she does so. Dr. Gross, clad in a faceless green suit, is seen spying on the trio with surveillance footage on holographic screens and quickly hides this before introducing herself to the three. She at first appears kind and sings a song about evolution, taking the heroes into her menagerie and showcasing all the different animals of which she has created cybernetic hybrids. Later, she takes the heroes to her "examination room" and gives them each a lollipop.

The doctor then takes off her "stem suit" revealing herself as a human much to Finn's excitement. She begins to tell the three about her "incentive" programme in which they can earn more mods the longer they work for her. She herself reveals her robotic modifications such as scissor hands and telescopic spider legs. Jake tries to show off his stretchy powers, but is unable to move. The heroes soon realise that Dr. Gross has laced the candy with a freezing formula and are all now petrified. She, accompanied by Tiffany and a hybrid of "wolf lards" places the heroes on operating tables and begins to cut into their hair to perform enhancements. Finn exclaims what she is doing and she responds that she used to be asked that"all the time back at the island" before revealing that humans don't know what they want and that it is up to her to "drag them into a golden age". Finn is shocked to hear that there are more humans alive and as Dr. Gross removes Susan's hat to perform on her she notices an already installed chip on the side of her head. As she reads it aloud she recognises the number "X-J-77" and begins to exclaim "wait, you're one of" before being punched by Susan, who did not end up eating the candy. Susan rescues Finn and Jake and begins to flee the ship, having known the layout somehow.

Dr. Gross uses a signal to activate her robot army and they begin pursuing the trio, but are fended off by Susan. Tiffany then traps the heroes with a net shot from a gun and Dr. Gross attempts to use saw blades from her hands to turn them into "spare parts". However, at the last minute Tiffany revolts and shoots her arm enhancement into Dr. Gross' blades, launching them into the ceiling and causing a malfunction in the ship. Dr. Gross and Tiffany struggle before Susan sets herself free and shoots the two with the net gun, trapping them both. Susan runs from the ship as the defeated doctor questions whether Susan wants to know how she "knows her" but Susan refuse and jumps to safety from the ship before it dives back into the ground and explodes.

In the final episode of the Arch "Come Along With Me", in the final credits on one frame appears survivor Tiffany, only with the bionic prosthetic left eye. Perhaps hints that Dr. Gross survived and will become the main antagonist of the 11th season of comics Adventure Time. 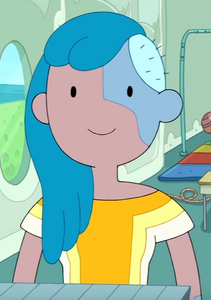 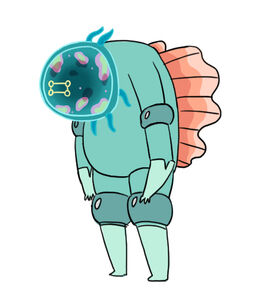 Inside of her suit