Villains Wiki
Register
Don't have an account?
Sign In
Advertisement
in: Tom Turbo Villains, Doctors and Scientists, Thief,
and 20 more

Using those chemicals for thefts or blackmail.
Humiliating Igor (formerly).

Mad Scientist
Dr. Gruselglatz is one of the most recurring antagonists in the Austrian TV show Die heiße Spur, even reappearring after it has been renamed into Tom Turbo. He also appears in a few Tom Turbo-books.

Dr. Gruselgatz was greatly enjoying his crimes, taking great joy in possessing dangerous chemicals. Whenever something went wrong, he constantly blamed Igor for it and called him by the name Winselfwolf, which he knew his assistant hated. He also had a very low opinion of Igor in general, getting angry at him whenever Igor didn't carry out his orders or using him for small duties, like opening the door for Fritz Fantom and leading up several stairs.

However, he himself got the same treatment from his cousin, the witch Grusella, who was mostly referring to him as an idiot.

Dr. Gruselglatz is one of the talking bike's greatest enemies along with Fritz Fantom, Rudi Rat and Rosso Robot. Unlike most of them, he seldomly works alone, mostly being accompanied by his assistant Igor. The mad scientist has a habit of humiliating his childish assistant, constantly blaming him for his incompetence as well as driving him mad by calling him "Winselwolf" ("whimpering wolf"). During his long run in the show, the doctor has invented various dangerous chemicals for his crimes, such as a poison that forces people to get an unbearable itching, which he planned to pour into the water supply. However, he's also been known for stealing chemicals created by other people when he sees some profit in it. This makes him similiar to Rudi Rat, who's known to be a brilliant inventor but also steals other people's inventions. Sometimes, Dr. Gruselglatz invents the chemicals not for himself, but others, like, on one occasion, he invents a chemical that makes people cry so his customer can sell his handkerchiefs. In another, he creates a giant handkerchief with a black spot that works as a black hole and sells it to Fritz Fantom, however the criminal Hugo Rabe switches it for a normal handkerchief. When Fritz Fantom and Dr. Gruselglatz realize this, they both go after Rabe, with Fritz Fantom finally getting the real handkerchief until he drops it, causing it to land in one place with the fake one and another handkerchief with an oil spot used by Tom. Tom eventually uses the real one to catch all three criminals.

After the show has been renamed, there was little to no change to the mad chemistrian's personality or appearance, except for that he now tended to wear a suit with a tie instead of his lab coat. He also didn't have a fix laboratory anymore, at least he mostly shown to be outside of his lab. He eventually even got a new assistant called Fiffi, who, in difference to Igor, was quite intelligent on her own. Another difference to her predecessor, who was humiliated by Dr. Gruselglatz for most of the time, was that she was constantly praising her boss and planning to one day be just like him.

One of those episodes even featured him manipulating Tom by pretending to be female bike called Tini Turbini who had been kidnapped by Dr. Gruselglatz in order to get Tom into travelling through time with of his tricks and get hypnotic pollen from the past for him. Tom was later "heart"broken when he learned the truth, and called the mad scientist a "squeaking Tinhead". As a doctor had jus gotten under the influence of the pollen, he started to squeak and knock on his head which made a metal sound, just as if it was made of tin. Tom was later able to overcome his disappointment. This incedent is never mentioned in the doctor's next appearances, however.

Notably, in the early episodes featuring him, the scientist was not just a chemistrian, but also a great inventor, creating machines and devices like a ball that could catch a dolphin. This aspect of his skills was later removed when the show introduced Rudi Rat, a villain with great skills in electronics. A later episode features him working on a computer while being completely overwhelmed, claiming that he knows about poisons, but not computers. 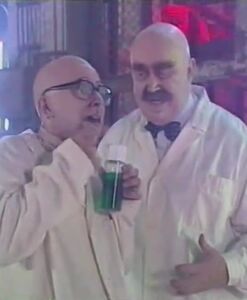 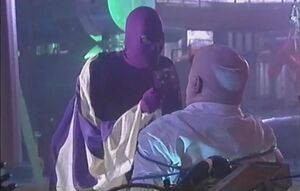 Dr. Gruselglatz being tied up by Fritz Fantom 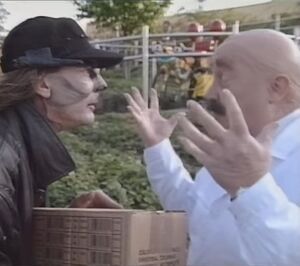 Tom Turbo (in the background) watches a conversation between Dr. Gruselglatz and Rudi Rat 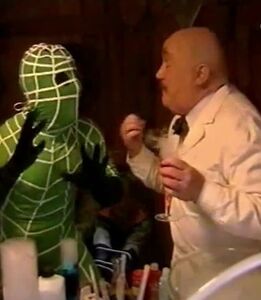 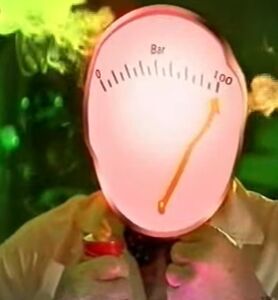 In one episode, Dr. Gruselglatz has a Villainous Breakdown after being tricked by Tom in disguise, visualized by having smoke coming out of his ear and his head turning into a barometer to show the scale of his anger 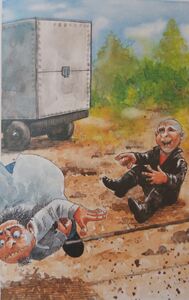 Dr. Gruselglatz and Igor as they appear in the book 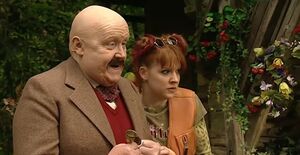 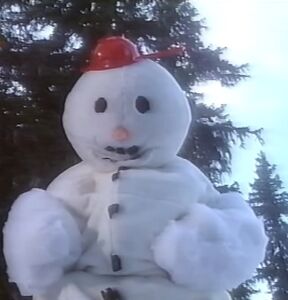 Dr. Gruselglatz as the Biting Snowman in the Christmas special 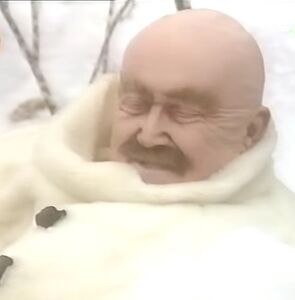 The Biting Snowman is revealed to be Dr. Gruselglatz