To use the dogs for chemical tests

Dr. Herman Varnick is the main antagonist of the 1992 family comedy film Beethoven.

He is a dognapper who took on the disguise of a vet while secretly performing cruel illegal tests on them. He was also employed by a weapons-dealer to test new bullets and targeted Beethoven as he required a dog with a large skull to check the efficiency of the bullet. He is also the archenemy of Beethoven and George Newton.

He was portrayed by the late Dean Jones.

In order to take Beethoven from the Newton family, he gives false information by claiming St. Bernards are naturally aggressive (in reality, they are the opposite) so that George will have Beethoven removed for his family's safely. Subsequent to the vet visit, George tells Alice that "any kinda weirdness and he's gone" but Alice makes light of it by saying "what should I watch for hon, wearing my clothes around the house?" .

Varnick then visited the Newton home on the premise of a follow-up on Beethoven's rabies shots and tricked them into believing Beethoven had bitten him by using scissors to tear his shirt sleeve and applying fake blood to both him and Beethoven's snout - he then hit Beethoven repeatedly to provoke him into lunging at him. Emily, who saw Dr. Varnick hit him, protests that the attack was fake, but George, fearing for his family's safety, takes him to Dr. Varnick's office. It is on the way there that George discovers his own affections for him; he remembers his father had to take their dog to the vet to be put down and he never forgave him for it. He fears that his own family will hate him now for taking Beethoven to be put down. Sure enough, when he returns home with the empty leash and collar, his family looks at him and leave the dinner table rather than remain with him (with Emily calling him a "Dog Killer").

He then threatened to take legal action unless Beethoven was taken into his office to be put down, however he soon had his two henchmen Harvey and Vernon take him to the testing area.

Varnick later gets into a confrontation with the Newtons. Dr. Varnick claims that Beethoven has already been put down. The children are distraught, but George is upset and reminds him that he had been told that this would not happen until the next day. George notices that Dr. Varnick has no bite marks on his arm after he refrains him from grabbing his daughter Ryce, therefore proving that Emily was telling the truth about the attack being fake. Realizing he's being tricked and double-crossed by the vet, George furiously demands Varnick to tell him where Beethoven is, but Varnick refuses, saying that he ordered Beethoven to be destroyed and threatens to arrest them for assault. George punches Varnick in the face before leaving to find Beethoven. George and Alice call the cops but they show no interest in intervening — they proceed to follow Varnick to his testing area.

By the time they arrive, he is already preparing to shoot Beethoven but is distracted when George smashes into the area—Varnick proceeds to try and shoot him for interfering with a sad look on his face. Before he can, however, Sparky the Jack Russell terrier (who had been chosen for a horrible chemical test) bites the evil vet in the crotch—causing him to scream in pain and misfire.

At this point, Ted, who heard the gunshot, smashes into the area using the family car and during the chaos, launches numerous syringes of chemicals into Varnick's chest, sedating him—Beethoven and the other dogs are freed and proceed to chase away Vernon and Harvey who tried to escape to the junkyard only to find out that they were about to be viciously maimed by a pack of Dobermans guarding the yard.

In the end, Dr. Varnick and his accomplices are arrested and indicted for their crimes. As Varnick is led away, he protests that they were scientific investigations. 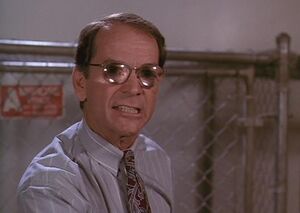 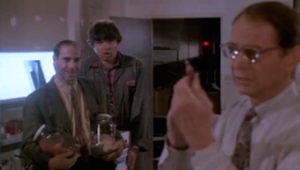 Varnick with his henchmen Harvey and Vernon 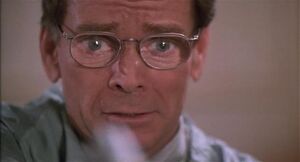 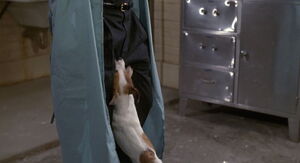 But not before Sparky bites the evil vet in the groin. 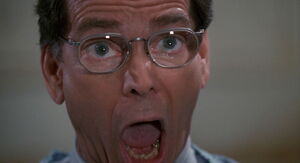 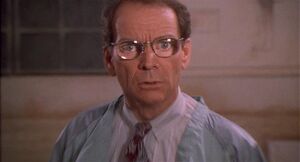 Varnick is shocked that his syringes are been launched towards to him by Ted Newton. 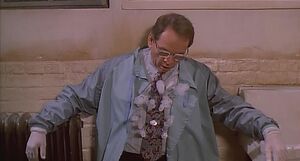