Robotnik
"Robuttnik"
Sonny (by his mother)

Being horrible.
Berating and abusing his minions.
Attempting to destroy Sonic the Hedgehog.
Making others bow before him.

Dr. Ivo Robotnik, or better known as Dr. Robotnik, or simply known as Robotnik is the main antagonist of the cartoon Adventures of Sonic the Hedgehog. He is a more comical version of his video game counterpart, who similarly desires to conquer Mobius and destroy Sonic the Hedgehog. While he is nowhere near as dangerous as his many other counterparts he has made up for it with his melodramatic flair and absolute refusal to give up despite his numerous failings. He was also quite possibly one of the most insane Robotniks who ever graced the screen and has become both loved and hated by both fans and non-fans alike.

He is also extremely extravagant in personality, having gone as far as creating a giant golden statue of himself that takes pride and place right outside his main stronghold.

Dr. Ivo Robotnik is portrayed as a mad scientist and supervillain who has terrorized Mobius for years and although powerful enough to hold his own fortress (complete with a large gold statue of himself outside) he never amassed the power of any of his other versions. However he was just as persistent—if not more so—and had a true love of villainy. He was also the only version of Robotnik to reach super forms, such as Super Robotnik and Supreme High Robotnik.

Dr. Ivo Robotnik was also a genius despite his often idiotic behavior and created many hench-bots to aid him in his schemes to either take over Mobius, destroy Sonic or generally cause trouble - the most well-known of these hench-bots would be the trio of Scratch, Grounder and Coconuts who served their master loyally but were often in the firing line of his wrath should things go wrong.

Indeed, one of Robotnik's major weaknesses in the series was being extremely arrogant and almost always placing the blame for any failure on his underlings. He also despised anything nice and was very likely insane (for example he took pride in being called "ghastly" "fiendish" or "generally unpleasant").

Dr. Robotnik also had an equally insane mother who went by the name of Mama Robotnik. She was often cruel to her son and may very well have been the reason he turned to villainy in the first place as she was criminally insane and hated anything normal or pleasant (she also considered her son a complete failure despite his many attempts to please her).

Despite the more comedic tone of the character to befit the series' style, Robotnik demonstrated that he was capable of committing reprehensible actions. One notable case in the episode "Mass Transit Trouble" involved him sabotaging mass transit systems across Mobius with bombs that would kill all present-and theoretically distant enough that Sonic couldn't save everyone. In the clip show episode "Hero of the Year", he tricked Sonic into a trap and caged all of his friends aboard a sinking yacht, leaving them to be drowned.

Not to mention the countless times he kidnapped someone, notably Tails and Professor Von Schlemmer, and either forced them to work on a weapon intended for use against Sonic, or threatened to kill them. One particularly bad case involved him keeping his perceived romantic rival Lucas trapped in a cage for thirty years because Lucinda, a woman Robotnik loved and desired, cared about Lucas and wanted nothing to do with Robotnik.

A true showman at heart, Robotnik is a textbook example of a self-absorbed and vain narcissist who is so excited over the fact he exists, that he cannot fathom how any of those around him do not also share this same excitement over his existence. Like an ignored child, he seldom speaks calmly and his default vocal setting is shouting, often accompanied by a lot of body language. He tends to dance and his sentences are tuneful at times. He appears to have histrionic personality disorder, which explains why his "evil" schemes are less about inflicting pain on people or causing actual suffering, but instead about spreading his glorious visage or changing the landscape to something more appealing to him. While largely a bumbling, harmless and comical clown, Robotnik can at times, both intentionally and unintentionally, be dangerous. His schemes often cause collateral damage, which Robotnik doesn't care about, and when he's sincerely angered, he can occasionally concoct a deadly plan or even physically attack. In the rare occasions Robotnik manages to emerge as a valid threat, his potential for harm and destruction is quite valid. Fortunately, he never maintains power very long. He also treats Scratch, Grounder, and Coconuts rather cruelly through physical assault and verbal abuse.

The Supreme High Robotnik was the ultimate villain of the AoStH universe and an empowered Dr. Robotnik who gained godlike powers sufficient to rewrite the laws of the universe to his will.

After traveling through time and space, Dr. Robotnik obtained the four Chaos Emeralds (Invisibility, Invincibility, Immortality, and the Power of Life). By wearing all four emeralds together, Dr. Robotnik transformed into the Supreme High Robotnik. Hoping to finally destroy his enemies, he sent Sonic and Tails through time to the Big Bang. However, they returned with four additional Sonics and Tails from different points in time. The team of heroes that now consisted of ten all worked together to steal back the Emeralds and return them to their original places.

Super Robotnik is a powerful supervillain ego of Dr. Ivo Robotnik. Dr. Robotnik falls into a tub of mixed cleaning chemicals that Coconuts makes but gains superpowers in the process and is mostly invulnerable. His weak spot is his own butt because it didn't get affected by the chemicals like the rest of his body did. After Robotnik transformed, he gave Coconuts a promotion to First Lieutenant for his actions, assigned him to recreate the super-strength formula, and demoted Scratch and Grounder. While Sonic and Tails are being served Chili Dogs for recovering a village's stolen goods, Super Robotnik arrives, first "shaking things up a little", then using his Super Freeze Breath, freezing Sonic and Tails, and throwing them to the frozen wastelands on the planet.

Super Robotnik later arrives back at his fortress, where Scratch and Grounder take inventory of stolen goods. Robotnik later tells them that Sonic should be escaping this very moment. Later, Coconuts has Scratch and Grounder assist him with the formula, but Coconuts creates a monster accidentally. After Scratch and Grounder throw ingredients into the formula that make it explode, Robotnik arrives, blaming them. Shortly after, however, he hears that the Four World Leaders are discussing on how to deal with him. Robotnik later captures the four, and tells Sonic that if he wants them released, he must defeat him in a gladiator battle. Tails later discovers his weak spot: his butt. Professor Von Schlemmer creates a powder that will penetrate Robotnik's butt and slowly negate his powers. He puts the powder on a cushion. Sonic disguises himself as a cushion salesman, and Robotnik steals that cushion from Sonic.

At the Gladiator Colosseum, Coconuts was unable to recreate the formula, so he gave Robotnik a Rump Protector. On the first two events, Robotnik was able to win with ease. However, in the final event, Robotnik's powers were finally neutralized, and he falls into the muck. He later re-promotes Scratch and Grounder so they can pull him out of the muck. But they fall in as well. Sonic wins, and Robotnik says "I hate that hedgehog!" quietly.

While most games feature a different version of Dr. Robotnik, the only game to ever have this particular incarnation of Eggman to appear in was Dr. Robotnik's Mean Bean Machine. He serves as the main antagonist and the final boss of the game with his own music (every other opponent has the same music). He is also the only character to have his own voice in the game: Laughing when he wins and yelling when he loses.

Robotnik later reappeared in Sonic Live in Sydney. In the musical, Robotnik escapes Mobius with the Chaos Emeralds and makes a new base in Sydney, Australia, prompting Sonic, Tails and Sally Acorn to follow him. After spying on his enemies, Robotnik devises a plan to kidnap Sally by giving her a pair of "Eggboots" and sings the song Give Me Chaos. After capturing Sally by freezing her, Robotnik unsuccessfully attempts to woo her, causing Sonic, who discovered Robotnik's lair thanks to the audience, to dress up as "Doctor Sonicstition" and offer him a love potion. After drinking the love potion Robotnik, proclaims his love for Sally, only to fall asleep as the "love potion" was actually a sedative. After Sonic disposes of his bomb, Robotnik escapes and presumably goes back to Mobius. 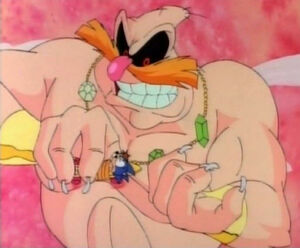 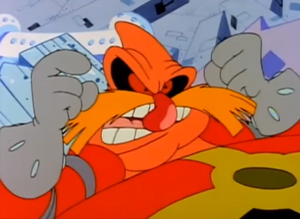 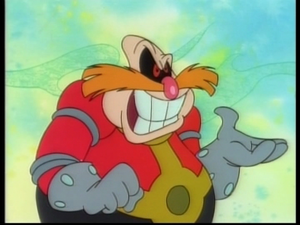 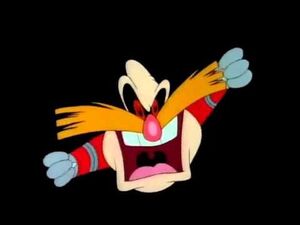 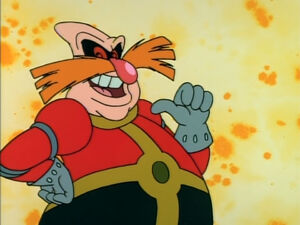 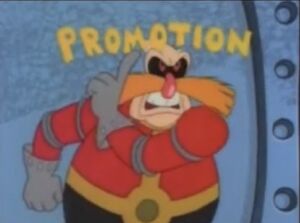 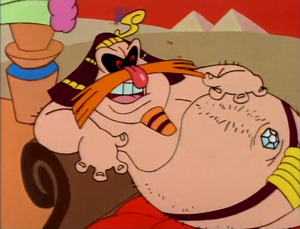 Robotnik dressed as a pharaoh. 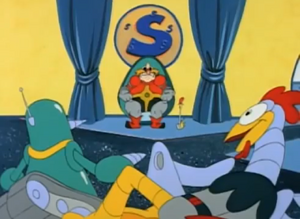 "Snooping as usual I see?" 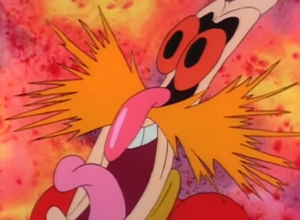 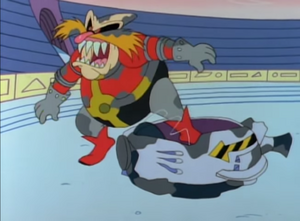 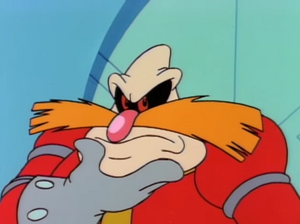 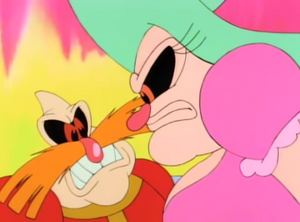 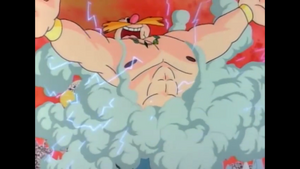 "THE SUPREME HIGH ROBOTNIK! MASTER OF THE UNIVERSE!" 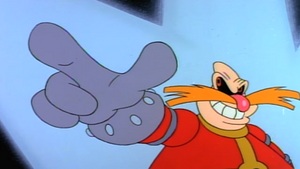 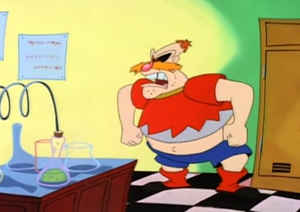 Robotnik during his teen years. 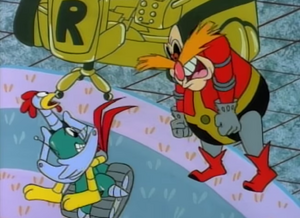 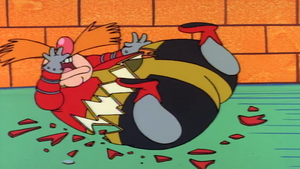 "Help! I've fallen and I can't get up!"
Add a photo to this gallery 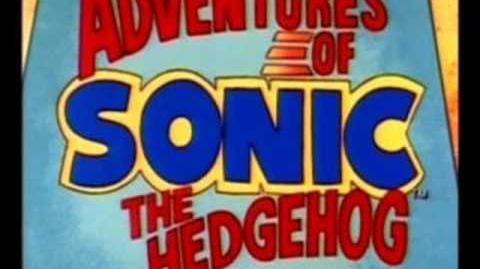 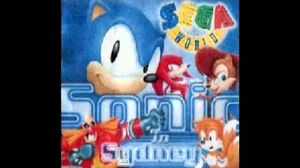 Retrieved from "https://villains.fandom.com/wiki/Dr._Ivo_Robotnik_(AoStH)?oldid=4265289"
Community content is available under CC-BY-SA unless otherwise noted.