This article is about the Fleetway "Sonic the Comic" villain - you can find information on the mainstream version in Dr. Ivo "Eggman" Robotnik

Terrorizing the people of Mobius.

Kill Sonic the Hedgehog.
Destroy Mobius in a kamikaze (both failed).

Dr. Ivo Robotnik, often known simply as Dr. Robotnik, is of course the most well known of Sonic's many opponents and while the videogame adversary is well-known their exists some alternate versions of the mad scientist that are not quite as well known.

Such is the case of the Robotnik found within the pages of the now discontinued Sonic the Comic, which was published by Fleetway as the main Sega-based comic in the UK.

Originally a kindly scientist by the name of Kintobor this version of Robotnik originally sought to erase all evil from Mobius via the use of Chaos Emeralds and was responsible for granting Sonic his amazing speed and distinctive blue coloration.

However something went horribly wrong during Kintobor's quest and he became corrupted into the larger-than-life monstrosity, Robotnik, an insane, sadistic and power-hungry tyrant who sought to conquer Mobius in keeping with the events of the original Sonic games.

As the series progressed Fleetway's Robotnik would become ever more dangerous, arguably more than his Archie counterparts, though he would eventually be dethroned (however Fleetway have never actually killed Robotnik off).

Much as Archie had based their Robotnik on the one found in SATAM so Fleetway's Robotnik was based on the Robotnik found on Adventures Of Sonic the Hedgehog - ironically despite being based physically on the goofier version of Robotnik, his personality was the opposite of the Aosth version, and he was still a very valid threat to Mobius. Some even consider him darker, and crueler than the version from the 1993 cartoon. The later design combines elements from both Robotnik's Adventures Of Sonic the Hedgehog design and his modern "Eggman" look.

The personality of Fleetway's Robotnik has varied as different writers have had different ideas on just how threatening they wanted him to be, always dangerous he was originally also slightly comical with a tendency to obsess over egg puns - however some writers objected to this and tried to make him exceptionally dark.

As a result Robotnik would change considerably and while still retaining some comedic charm when needed he was, in general, a truly monstrous character and often plotted to destroy the planet entirely: this trait would separate him from all other Robotniks. Out of all the alternative Eggmen it was the Fleetway version that actively sought to destroy Mobius and almost succeeded on several occasions.

Fleetway's Robotnik is possibly the most sinister of all the bad doctor's incarnations. This mind-twisted monstrosity was a sociopath who thrived on other peoples pain and misery, and actually had people executed, usually for committing the most insignificant of misdeeds.  One citizen stated 'the crime for ANYTHING around here is death!'  He was also a master of disguise and the only incarnation of Robotnik to have Mobians working for him, like Techno the Canary, who quit and Dr. Zachary. He also was lucky in having Grimer, the only assistant who was both competent, AND didn't have dreams of betraying him. Robotnik could also be a deadpan snarker, with a droll sense of humor.

Robotnik possesses insane physical strength and durability. He can also absorb Chaos energy and is capable of altering his physical appearance through regeneration. He regenerates by encasing himself inside a large egg until his transformation is complete.

As God Robotnik, Robotnik is almost fully omnipotent. He can edit and modify the timeline any way he sees fit, rewrite any event and warp reality itself and teleport himself and others. For offense, Robotnik primarily resorts to lasers. These lasers can also teleport others and knock them out in one shot. Robotnik can also alter memories and make others fight for him through mind control, as well as clone himself, infect others with diseases, turn others into himself, fly, change shape and size, turn others to stone, strip others of their abilities and resurrect and summon anything.

God Robotnik's only flaw is that his powers can be removed through the Grey Emerald, reverting all of his changes : he is also limited in the fact that his own personality causes him to be easily manipulated by Sonic, who uses Robotnik's great insanity and egoism against him, tricking Robotnik into extremely foolish actions that contributed to his own demise (this also proves that while Robotnik had some degree of omniscience he was not fully omniscient by any means since he could not tell that Sonic was tricking him (though, as mentioned before, his own insanity and egoism may of blinded him to this fact regardless).) 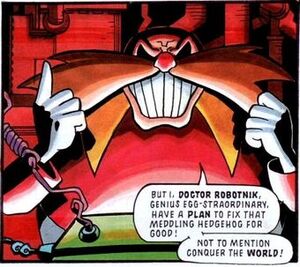 Robotnik's original appearance in the Comic, referencing his "Classic" design from "Sonic the Hedgehog" games 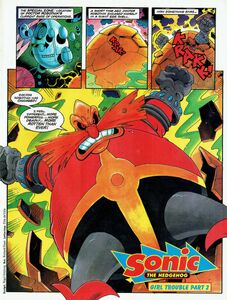 Robotnik's appearance after transformation, based on Miltron Knight's design for the character 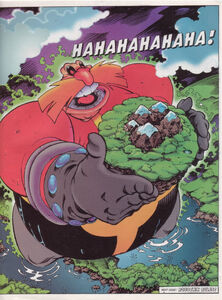 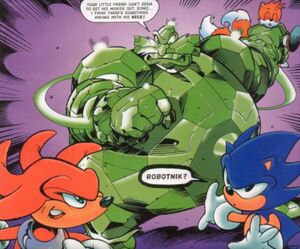 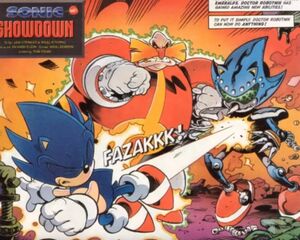 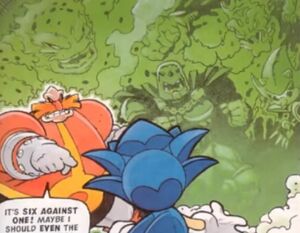 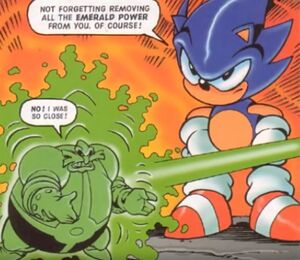 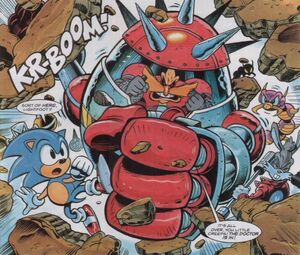 Robotnik attacking Sonic.
Add a photo to this gallery

Retrieved from "https://villains.fandom.com/wiki/Dr._Ivo_Robotnik_(Fleetway)?oldid=3889027"
Community content is available under CC-BY-SA unless otherwise noted.