View source
watch 01:25
Jurassic World: Dominion Dominates Fandom Wikis - The Loop
Do you like this video?
Play Sound
This article refers specifically to the first version of Dr. Robotnik to have the Kintobor origin. For the current and most well known version, see Dr. Ivo "Eggman" Robotnik

Tragic Tyrant
Dr. Ivo Robotnik, formerly known as Dr. Ovi Kintobor was the main antagonist of early Sonic the Hedgehog western media. He is a mutated scientist and the embodiment of all evil in Mobius, as well as the arch-nemesis of Sonic the Hedgehog. He was formerly a benevolent scientist known as Ovi Kintobor, but after an accident, he was infused with a rotten egg and turned into the monstrous tyrant known as Ivo Robotnik, the exact opposite of his former self.

While the exact cause of the accident differs depending on the continuity, This version of Robotnik was used as the base for majority of the western Sonic media, spawning various incarnations such as the Robotnik from Sonic the Comic, who had the same origins as this Robotnik and started out being based on this version, having the exact same appearance, but slowly became a mix of other, more well known versions. He also spawned the Robotnik from the French comic book Sonic Adventures.

Unlike most other incarnations following this one, this incarnation of Robotnik was not a human, at least after his transformation into Robotnik. He was a mutated monster, barely having any of the humanity that his former self had.

In Japan, the character was known as Dr. Eggman, and was not called Robotnik whatsoever, and was a comedic villain, and completely human, compared to the western Robotnik, which contrasted heavily with the Japanese version.

This design of Robotnik quickly became obsolete in western Sonic media, having been replaced by the more infamous Dr. Ivo Robotnik from the Adventures of Sonic the Hedgehog cartoon as the main source of inspiration for the designs of later Robotniks in western states.

Robotnik, originally known as Ovi Kintobor, was a kind and benevolent scientist that operated in a local toxic waste dump. He was using the Cogwinder Retractable Partulent Corer to search for Chaos Emeralds, specifically the final, gray emerald. One day, he accidentally dug up a hibernating brown hedgehog named Sonny. He used a machine called the Lingua Scrambler'Um to teach Sonny how to speak human language. Kintobor explained to Sonny that he needs the Chaos Emeralds to reverse years of pollution and rid Planet Mobius of all evil, reverting it to its natural state.

Kintobor rescued many poisoned and struggling animals in his base, many of which Sonny befriended. Eventually, Kintobor appointed Sonny to be his right-hand assistant so he could help him in his search for the emeralds. Kintobor began teaching Sonny about physics, but Sonny discovered a treadmill that Kintobor had constructed. Running on it to pass the time, he eventually broke the sound barrier, crossing all known limits of acceleration and moving at the speed of light. Kintobor was alarmed, rushing to slow down the treadmill, only to find that Sonny had somehow turned blue. Kintobor began calling Sonny "Sonic" due to how fast he was moving. Sonic used his speed to further assist Kintobor in his experiments, and discovered a machine made entirely out of gold rings. He found out Kintobor had used this machine to gather all evil in Earth into six colored emeralds, and had them stored them in a cabinet.

Kintobor explained that the emeralds could eliminate all pollution from the world, or in the worst scenario, double the amount of evil in the world if they were to be hit by radiation. Unfortunately, just as he said that, a wave of pollution penetrated Mobius' surface and hit the emeralds, which made Kintobor's machine, the Retro-Orbital Chaos Compressor turn on and cast a beam on Kintobor, a half-eaten egg, and the Chaos Emeralds.

This transformed Ovi Kintobor from the benevolent, kind, scientist into a cold-blooded, wrathful beast that uses his intellect to spread more pollution and evil into the world, unlike Kintobor, who wanted to rid the world of it. The creature chased after Sonic, who grabbed many gold rings and ran out of there as fast as possible. The monster named itself Dr. Ivo Robotnik, and swore to destroy Sonic no matter what.

Robotnik is a round mutated scientist resembling an egg. He dons a messy red mustache, and for some reason, lacks eyeballs, leaving only empty gaping voids in his eye sockets. He wears a red "shirt", a yellow collar, and black pants with two white buttons on them. His attire was somehow created by the chaos energy, as Kintobor did not sport these clothes in most continuities. Unlike the Japanese Eggman, he does not wear gloves. In the Adventure Gamebook, he has large white eyes and blue pupils, but looks the same as everywhere else for the most part.

As Kintobor, his appearance is unknown, and differs depending on version. In the US Promotional comic, he wore a brown blazer with a white shirt underneath, as well as blue jeans with a black belt. He had messy white sideburns and a large white Kaiser mustache.

As Kintobor, he was a very kind and benevolent, albeit clumsy scientist, helping people in need and saving sick and poisoned animals, and using his talents to benefit others rather than himself. After his transformation into Robotnik, he became a monstrous tyrant that only cared about himself, and would do anything to destroy Sonic the Hedgehog, even going to extreme lengths to fulfill his dream to conquering Mobius for himself. 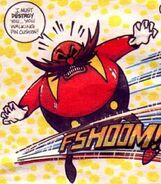 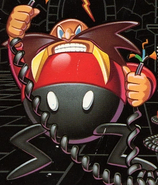