Dr. Jamison Junkenstein is one of the major villains of the Junkenstein's Revenge comic from Overwatch. He is a fictional scientist in a story told by Reinhardt.

Jamison Junkenstein was a scientist who served the local lord of Adlersbrunn. He created life-like automatons, but the king only used them as servants and was never impressed. Upset about this, he attempted to create a truly living creature. This ended in failure, until The Witch of the Wilds came to him and offered her help, in return for a favor she would ask later. Now with the Spark of Life, he finally created his creation and attacked the town.

In the Junkenstein's Revenge seasonal event, Junkenstein is the fourth boss to appear. He is relatively easy, as he stays in one spot. He fires his weapon, which is almost identical to Junkrat's other than a faster fire rate and no reloading. After being killed, he will later be revived by the Witch. Throughout the entire campaign, Dr. Junkenstein will activate Shock Tires that will advance towards the door, and the heroes must destroy the tire before it damages them or the door. His weapon, based off of Junkrat's Frag Launcher, fires grenades which may also damage the door that the heroes must protect.

Outside of Junkenstein's Revenge, Dr. Jamison Junkenstein is avaiable as a skin for Junkrat. The skin's rarity is Legendary, and can only be looted from a loot box or purchased during Overwatch's Halloween season. He can also be seen on some Sprays each character can collect, which can also only be obtained during the Halloween season. The RIP Tire also gets re-skinned in each of Junkrat's skins, and it becomes the Shock Tire. Dr. Junkenstein is one of the unique skins that changes the character's dialogue, making it the personality of Jamison Junkenstein rather than Jamison Fawkes. Dialogue changes can be seen below:

The Villains' team in Junkenstein's Revenge 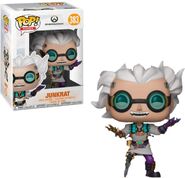