Psychologist under the employment of OCP

Sleeping with her boss

To take RoboCop offline, get her RoboCop 2 project up, running and help OCP succeed in their goals (all failed).

Dr. Juliette Faxx is the secondary antagonist (behind the cultic drug lord-turned evil cyborg, Cain) for the 1990 film RoboCop 2.

She was portrayed by Belinda Bauer.

Dr. Faxx moved up to head the OCP Attitude Adjustment team and became the psychologist responsible for overseeing the RoboCop 2 project. After watching a series of failed RoboCop 2 demonstrations, she explained that police officers were not the ideal prototypes to become cyborg donors: stripped of their human bodies and traits they become suicidally insane. When Johnson attempted to counter her by claiming that the first RoboCop used a deceased police officer as a host and was a success, she explained that RoboCop's success was explained by Alex J. Murphy's sense of duty and his Irish Catholic family background resulting in his opposition to suicide due to it being considered a mortal sin in Irish Catholic faith and in general is what kept him alive, thereby making Murphy an exception. A charmed Old Man wished to hear more from Faxx over Donald Johnson.

Faxx proceeded into looking criminal files of those in the death row with desire for power and immortality, to use them as donors for the project, believing that minds would embrace easier the nature of a cyborg. This drove Dr. Schenk mad, who left the room threatening that she would lose her job. But he was unsuccessful.

Faxx is seen again addressing an OCP council, who were all worried about RoboCop's violent behavior. Proposals included from being a moral model to addressing environmental issues, much to Johnson's derision, which didn't dishearten Faxx. As a result, OCP decided to repair RoboCop and also have Faxx reprogram him, first into believing that he is a machine unit, free from doubt and difficult choices. But Faxx's reprogramming forces hundreds of politically correct and nonsensical directives shoved down onto RoboCop's memory, severely impeding his ability to perform his police duty. RoboCop's partner Lewis took the cyborg to repair his state of programming, only to be told that directives imposed by Faxx cannot be removed and he has to obey all these irrelevant commands. His programming stretched to the breaking point, RoboCop resorted to extreme therapy - by electrocuting himself in an attempt to purge all garbage directives put by Faxx. Fortunately for the cyborg, the risk paid off, and Murphy was back to his old self.

When RoboCop eventually apprehended and seriously wounded the nuke cult leader Cain, she opted to transfer his brain into OCP's newest crime prevention unit. Her reasoning was that a criminal may find the concept of immortality desirable, and his addiction to narcotics would be the ideal way to control him. She was quite ruthless as she turned Cain's life support machine off, killing him, and notified Dr. Weltman to contact the organ harvest team. She becomes strangely attached to RoboCain and uses his Nuke addiction to control him, again ignoring Schenk's prohibitions to enter illegal narcotics in the laboratory. When Poulos informed the company that the Mayor Marvin Kuzak is going to solve his problem with the debt to the company by accepting monies offered by Nuke Cult, foiling thus OCP's plans of foreclosure, Faxx suggests to Old Man to have RoboCain assassinate the mayor along with Nuke Cultists to avert the transaction. RoboCain assassinates as it was told, but the mayor managed to escape.

Faxx is seen at the Civic Centrum presentation of Delta City planning hosted by Old Man, with RoboCain as its enforcer of law and order. During the presentation, Old Man produces Nuke as part of demonstration. The sight of drug excites the addicted cyborg and causing it to behave aggressively in a bid to get the drug. Faxx made an attempt to shut down RoboCain, but Cain overrode his restriction. To make matters worse for her, Murphy arrives at the presentation, challenging RoboCain to a fight. Busy denouncing Murphy as an obsolete cyborg, Faxx notices too late RoboCain snatching disarmament remote from Faxx, crushing it. Now able to arm itself, RoboCain wreaks havoc, causing multiple casualties upon those present at the Civic Centrum. Faxx was taken to safety at the instruction of Old Man by Johnson.

Eventually Faxx makes her way out of Civic Centrum building, where police and RoboCain were waging savage shootouts on each other, with mounting body counts. But RoboCain was a powerful cyborg, unharmed by police's inferior firepower and inflicting heavy losses on anybody unlucky to be caught in a crossfire. Faxx shows sign of relief that her creation is still unharmed and full of fight. But that relief does not last long as Murphy uses Nuke to distract RoboCain, then sneak upon behind the rogue cyborg and jumped on it. After a brief tussle, Murphy manages to took Cain's brain out of RoboCain's body, crushing it, the cyborg criminal finally put down by RoboCop with the help of officer Anne Lewis.

The bloodshed inflicted by RoboCain was catastrophic, and the Old Man is worried it could look really bad for the company both financially and in reputation. Behind Faxx's back Johnson, who disliked Faxx from the start, suggests exploiting Faxx as the one responsible for RoboCain's rampage to satisfy justice and redeem the company's name. The Old Man smiles in approval and tells him to "Get right on it". Faxx, not knowing Old Man and his aides' scheme to use her as a pawn, leaves the carnage elatedly with the Old man, much to the irritation of Lewis, who is comforted by Murphy. 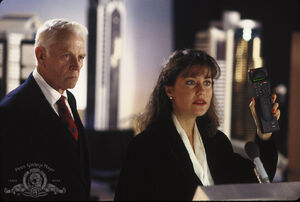 Juliette Fax, alongside the Old Man. 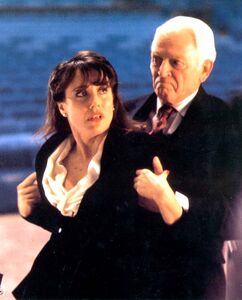 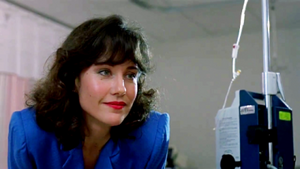 Add a photo to this gallery
Retrieved from "https://villains.fandom.com/wiki/Dr._Juliette_Faxx?oldid=3830627"
Community content is available under CC-BY-SA unless otherwise noted.