The Return Of Dr. No

Operative of the SPECTRE organization

Amplified strength via his metal hands

Dr. Julius No is the titular main antagonist of the late Ian Fleming's 1958 James Bond novel Doctor No, as well as the 1962 film adaptation, and a posthumous antagonist in the 1963 film From Russia with Love.

He is an agent of the notorious criminal organization SPECTRE, who profits off of playing the United States and the USSR against each other. Dr. No's radiation experiments for SPECTRE led to loss of his hands, which he replaced with steel prosthetic hands capable of crushing metal objects.

He was portrayed in the film by the late Joseph Wiseman.

Julius No was born in China to the daughter of a wealthy Chinese family and a German missionary. Such mixed-race status precluded him from social acceptance in his community, but his skill with numbers gained him the position of accountant for a local Triad, or crime family. He stole a large sum of money from them, and left China to hide from their retribution. It was about this time that SPECTRE picked him to work for their espionage department.

After working on various projects for SPECTRE around the world, Dr. No was sent by his superiors to Crab Key, an island they had bought off Jamaica. Here he was to orchestrate a project using radioactive beams to interfere with US space program in Cape Canaveral, funded with Soviet money. He had a local British official murdered when he got too close to the truth. This caused Britain's MI-6 to send James Bond, agent 007, to investigate.

Upon Bond's arrival in Jamaica, Dr. No made several attempts to assassinate him. When all of these attempts failed, Dr. No let Bond come to him. When Bond finally arrived on Crab Key, Dr. No had him captured and brought to him, where he offered him a position in SPECTRE.

When Bond refused, No had him locked up in a cell while he went to work on the project's latest phase, to bring one of NASA's gemini rockets. Bond escaped from his cell and tampered with Dr. No's machinery, which began to self destruct. Bond and No ended up fighting over his boiling reactor coolant as his nuclear reactor overheated. He fell into the coolant and was boiled alive, unable to get a firm grip on anything with his slick, metallic hands.

In this continuity, Dr. No is shown to have survived his encounter with Bond, with the coolant mutating him and turning his skin green. 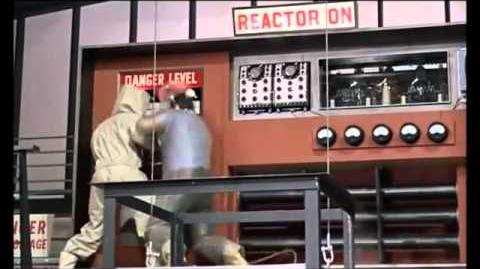 James Bond vs Dr No
Dr No death