NOTE: This article is about the incarnation of Dr. Light from the Arrowverse. The mainstream version can be found here: Dr. Light (DC Comics).

One of the Breachers sent by Zoom to kill the Flash

Kill Linda Park and take her place (formerly).
Set a trap for Zoom.

Dr. Light is a villainess from the CW TV series The Flash, appearing in Season Two's "The Darkness and the Light". She is the evil Earth-2 counterpart of Linda Park, Barry Allen's former girlfriend, and was sent to Earth-1 by Zoom to kill the Flash.

She is portrayed by Malese Jow.

Little is known of Linda's early life other than she was a small time thief instead of a reporter for the Central City News. When Dr. Harrison Wells' particle accelerator exploded underground, Linda was exposed to the dark matter, making her a meta-human that can derive power from the starlight which advanced her career in thievery. Linda encountered The Flash on multiple occasions during her heists who later remarked that she never killed anyone.

From his abilities, Cisco finds out that a meta-human is attacking Central City Bank. He tells Barry who immediately heads there. When he arrives there, he sees Dr. Light who is just about to leave with the money. Light blasts a light beam at him and uses her power to create a wave of star fueled energy which blasts away surrounding civillians. While Barry catches every civilian Light escapes. Back at Star Labs Harrison Wells intends for Barry to capture Dr. Light to attract Zoom.

When an alarm at another bank goes off, Barry espects Dr. Light to be the reason and prepares to face her again. Before he leaves Star Labs Jay Garrick tells him that Dr. Light is not a killer and that he can talk to her. At the bank, Light uses her powers to burn a hole in the side of the vault. Inside, she meets Barry who tells her that while he knows that Zoom sent her to kill Barry, she does not need to do it. Light replies that she knows that and intends to leave town with the cash from her heist. Barry offers her protection from Zoom but she claims that no one can protect her from him. She then removes her visor and Barry is caught off guard when he sees her face. He calls her Linda and she realises that she has a counterpart at Earth-1. Calling the conversation with Barry a mistake she illuminates the room, leaving Barry temporarily blind, and flees from the scene.

Back at Star Labs Barry and his team fear that Dr. Light intends to kill her Earth-1 counterpart as this was the first thing Atom-Smasher did when he arrived. Indeed, Dr. Light arrives at Linda's workplace, knocking out Caitlin and Jay Garrick who have been observing the place. Inside the building, Light orders everyone except Linda to leave, telling the latter that she intends to kill her. She claims that while she has never killed anyone, the only way for her to survive is to take Linda's place. Linda's boss then attacks Light and, surprised by the attack, she kills him by impaling her with a energy blast. While Light looks at her hands in shock, Linda's colleague Iris grabs her revolver and shoots at Linda's head, destroying the mask. Linda sees Dr. Lights face and asks how this is possible. Light replies that she couldn't understand and uses her powers to escape when Garrick enters the building.

With his powers, Cisco finds out that Light is at a train station trying to leave the city. As Barry won't allow her to leave the city, she attacks him intending to kill him for Zoom. Wells advises Barry to create a speed mirage, which means running so fast that he creates multiple after images of himself. By doing so, Barry confuses Dr. Light who does not know which Flash to attack. This allows Barry to slowly advance on her and knock her out. Dr. Light is then imprisoned in the Pipeline and Barry intends to use her to lure Zoom into a trap.

While imprisoned she is interrogated by Barry. She reveals that she was told by Zoom that after she had killed Barry she was to throw the emblem from Barry's suit through the breach to prove that she murdered Barry. She agrees to work with the Flash to trap Zoom, realising it's the only way she can continue her life.

Investigating Dr. Light, officer Patty Spivot finds out that theoretically Dr. Light's powers could allow her to become invisible. Indeed, Dr. Light does exactly that when Cisco brings her something to eat, causing him to believe that Light has fled. When he opens the door of the cell to check, she shoves him to the ground and escapes.

As Dr. Light left her suit in her cell, Barry and his team decide to use Linda to fool Zoom, making it seem that Linda is Dr. Light and kills Barry. After briefly training Linda their plan comes to action at a breach near the docks. However, Zoom does not appear after Linda throws the emblem through the breach. 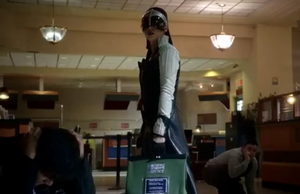 Light at her bank heist. 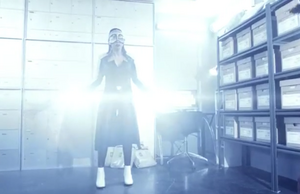