To steal as he please.

Thief
Dr. Arthur Light is a powerful mad scientist who appears in several episodes of Teen Titans, once more a comical foe, but still not one to be taken lightly. His arch-rival in this version is Raven, who regularly trounces him with the darkness she contains, and who on occasion can defeat him just by showing up and glaring, so searing are the memories of his beat-downs.

He was voiced by Rodger Bumpass who also voices Major Nixel, Squidward Tentacles and Professor Membraine.

Doctor Light is a villain who likes to talk big, and he thinks of himself as the most accomplished, clever and mightiest bad guy around. He enjoys teasing his opponents with puns relating to light. However, he usually fails to live up to his boasts because of his overconfidence and a sheer lack of common sense. He is also extremely afraid of Raven since she went temporary crazy along with demonic and dragged him into her cloak in "Nevermore", nearly killing him. Doctor Light might be afraid of bats as seen in "Birthmark" but that's not confirmed. 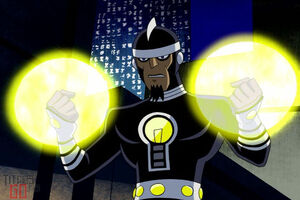 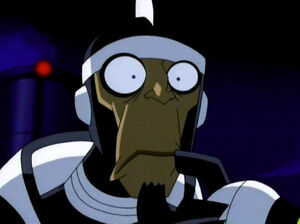 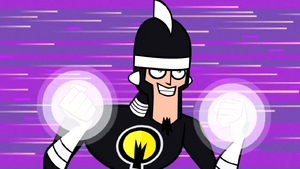 Retrieved from "https://villains.fandom.com/wiki/Dr._Light_(Teen_Titans)?oldid=3896566"
Community content is available under CC-BY-SA unless otherwise noted.