Villains Wiki
Register
Don't have an account?
Sign In
Advertisement
in: Doctors and Scientists, Vengeful, Male,
and 22 more

Get revenge on Dr. Wakeman for getting more fame than him and take over the world by controlling XJ-9/Jenny Wakeman's sisters (failed).

Doctor (Dr.) Locus is an antagonist in the animated TV series My Life as a Teenage Robot. He is a mad scientist and the father (and creator) of Melody Locus, a teenage robot like XJ-9/Jenny Wakeman.

He was voiced by J. Grant Albrecht, who also voiced Father Balder in Bayonetta, The End in Metal Gear Solid 3: Snake Eater and Cryptosporidium in Destroy All Humans!.

Dr. Locus is a stout and fairly stocky or muscular build man. In his reference to work creating robotic farm animals; has the design of a typical farm worker. He wears dull green overalls and underneath is a white buttoned shirt. Although roughly middle-aged, Dr. Locust seems to have underwent premature balding only with two strands hair remaining, he has a curly cream yellow beard that extends all the way to his chest, regardless of his workaholic nature his beard is well neatly trimmed along with his eye brows. His eyes are tealish blue, wears glasses and has a big read nose.

Dr. Locus appears for the first time in Bradventure. Growing tired of always being on Jenny's shadow, Brad decides to go on a journey to prove himself as a hero but during his way he encounters a hideout that leds him to Dr. Locus' lab where the scientist was fixing his recent destroyed robotic farm animals that previously attacked Tremorton just when he notices Brad sneaking in who runs away and demands him to come back as his robots go after Brad. During his way out of Locus' hideout, Brad meets a teenage girl called Melody who takes him to meet her father who turns out to be Dr. Locus himself. The old man presents himself to Brad as a gentle and caring person who created several farm robots that he wants to experiment to improve them as possible. Brad has his doubts of trusting the doctor as he says one of his pig robots attacked tremorton to which Locus explains it may be the testing of flying ability until Brad mentions that Jenny had to stop them which immediately caught Locus' attention who asked him if he knew Jenny and indeed was Brad's friend so Locus asks him if he could call her to come to his laboratory but when Brad insists he should leave, Locus finally reveals his true colors when he traps Brad in a giant cage. While Melody is confused, Locus explains that his main goal is to get Jenny's schematics to complete his evil plans that he refuses to tell and leaves taking Melody with him.

Later on after rescuing Brad, Jenny is suddenly electrocuted with a collar put by Locus from behind after Brad escaped to the surface, who meets Melody telling him that her father has captured Jenny. On his laboratory, Dr. Locus has already made a CD copy with Jenny's schematics just when Brad and Melody enter in, but Locus demands Melody to obey and come with him. Although feeling uncertain if he would do it, Brad tells Locus to release Jenny, only to be responded by the mad scientist releasing Jenny commenting that he already has what he needed from the start but reveals that he can't let both teenages leave now that they know his secret and activates the hideout's destruction sequence before escaping with Melody.

After Jenny and Brad successfully escaped in time, it's revealed that Melody helped with her robotic extended arm, revealing herself as one of Dr. Locus' creations who comments that once he equips Melody with the weaponry of Jenny's, she will become the most powerful robot the world's has ever seen, and Melody (uninterested) agrees.

Dr. Locus later makes a cameo in No Harmony with Melody. Altough not appearing physically, Dr. Locus is mentioned throughout the rest of the episode and their last encounter with the mad scientist led Jenny to believe that Melody was plotting something against Brad.

Dr. Locus makes his last appearance in the show in Turncoats, revealing himself to be the one controlling Jenny's sisters and caused the destruction at the convention by controlling Nora's new invention at the time. He also reveals that his true plans are the result of no one wanting his inventions because there were others much better, which includes Dr. Wakeman in. During the final battle with XJ-8, Locus proceeds to use the remote control to take over Jenny and commands her to destroy her mother, but fortunately, his ultimate plan is foiled when Dr. Wakeman makes Jenny aim and shoot at the remote control causing it lose possession over Jenny who proceeds to hug her mother in happiness, while a frustrated Locus angers about his invention getting destroyed, only to be suddenly eaten by Dr. Wakeman's garbage disposal as punishment for his actions. It's unknown if Dr. Locus died or was simply put under arrest for his crimes. 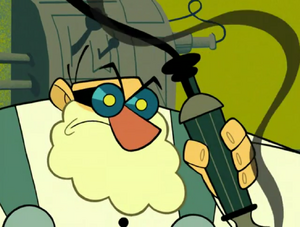 Dr. Locus' first appearance as he notices Brad sneaking in. 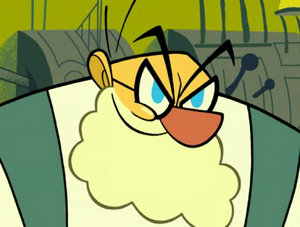 "Thank goodness you found him Melody, I was afraid he'll be frightened off by our little experiments." Dr. Locus' evil grin. 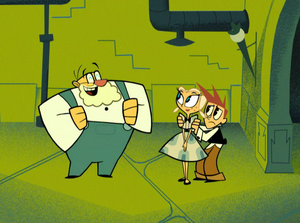 Locus presenting himself to Brad. 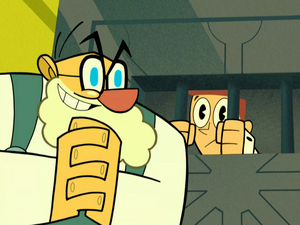 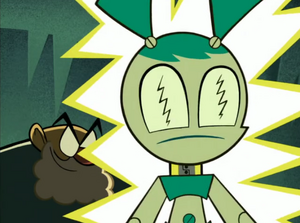 Locus electrocutes Jenny with a collar. 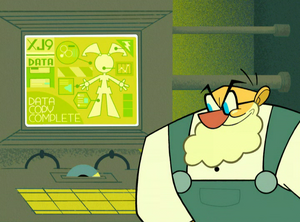 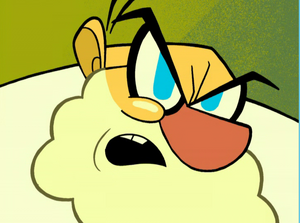 "Melody, you know you must obey me, come here!" Dr. Locus' evil stare as he demands Melody to obey him. 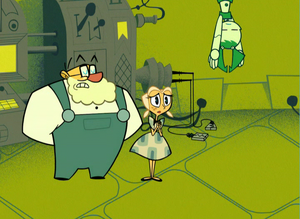 "I got what I needed, take her!" Locus releases Jenny. 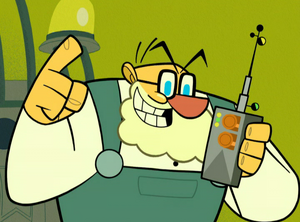 "So I have to bury you with them!" Locus activates the hideout's destruction sequence to prevent Jenny and Brad from telling his secret. 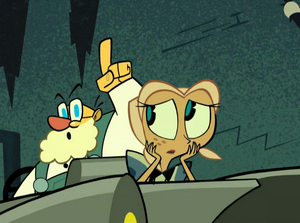