The Adventures of Tintin

Produce as much fake money as possible.
Sabotage the world’s oil reserves to weaken armies (all failed).
Overthrow the emir Ben Kalish Ezab so that the marquis Di Gorgonzola can continue his slave trade (succeeded but failed later).

Dr. Jorgen Wilhelm Müller is the secondary antagonist in Hergé's Adventures of Tintin series. He appears in three adventures. Only in The Land of Black Gold, however, is he the main antagonist. He is a doctor and scientist of Germanic origin who moonlights in counterfeiting and other shady dealings. Later in the series, he appears to have branched out into Arab politics. He is loosely inspired by the real-life counterfeiter Georg Bell, an agent of Nazi Germany of Scottish descent, who used counterfeit money to help the Nazi government undermine the Russian economy.

In The Black Island

Müller first meets Tintin in England, where he is working for a gang of counterfeiters. Warned that Tintin may track him down, he sets a bear trap for him in his yard and catches him. He then plans to commit Tintin to his insane asylum, where he hopes Tintin will be driven mad or else die under the treatment. Tintin manages to escape using the fireplace to burn through his ropes. In the fight with Müller, the house is set on fire. Müller traps Tintin in the bathroom, and when the fire brigade arrives, cuts their hose.

Later, Müller returns to the ruined house with his henchman Ivan to intercept a delivery of counterfeit money. Tintin, having discovered their delivery system, is there, and manages to beat them in a fight. However, Müller and Ivan escape and get on a train to Scotland.

Tintin tracks them to an abandoned castle on the Black Island, where he manages to defeat them and the rest of the gang.

The Land of Black Gold

When Tintin finds Müller again, he is in the Arab country of Khemed, helping the rebel sheikh Bab-El-Ehr fight to overthrow the Emir. He is now leaner and has a fuller beard, allowing him to pass as an Arab. Tintin finds he is playing both sides, meeting with the Emir as well to further pit them against each other and begin a war he can profit from. As a final effort, he kidnaps the Emir's son prince Abdullah, framing Bab-El-Ehr for it. When Tintin and Captain Haddock manage to discover this, Müller takes Abdullah in his car and tries to escape into the desert. Abdullah proves too much for him, pouring itching powder down his shirt, causing Müller to crash the car.

A shootout between Tintin and Müller ensues, but when the Arab police arrive, he decides to kill himself rather than face arrest. This also backfires, as Abdullah has switched his gun for an ink-pistol. Thompson and Thomson discover Müller's invention, formula 14, a chemical disguised as Aspirin that increases the explosive qualities of the oil. It is revealed that he has been destroying oil pipelines to increase the demand for oil and further increase tensions between the Middle East and the rest of the world.

In Müller's last appearance, Bab-El-Ehr has seized power in Khemed. Working with him again, as well as Rastapopoulos mainly, under the name Mull Pasha, Müller is now a high ranking military official. His one action in this adventure is to order the air force to bomb Tintin and the Captain as they escape on horseback. This backfires when his incompetent pilots end up bombing their own armored cars instead. He then sends At the end of the book, a news clipping reveals that he was arrested after the Emir returns to power, but it is not mentioned how, and that Mull Pasha was truly Müller. 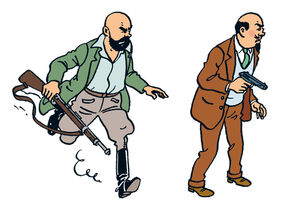 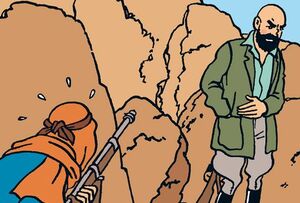 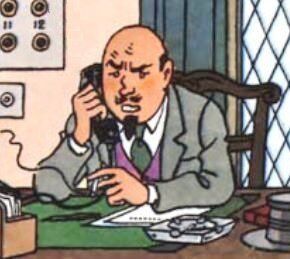 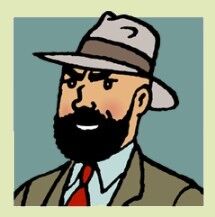