Usurping Mad Scientist
Dr. Mechadoc is one of the main antagonists of the Bomberman Jetters anime. He is Bagura's seemingly trusty right-hand man who develops robots and minions for the Hige-Hige Bandits, but eventually reveals himself to be a far more sinister man than Bagura himself.

Mechadoc turned himself into a cyborg when he was young, resulting in his brain being visible in half of his head. He wears a stereotypical white lab coat and has a monocle. His head is bald apart from two puffs of grey hair on the sides of his head. He can frequently be seen sporting an evil grin.

As a young child, Mechadoc went to the same science university as Bagura and made progress on his work. However, Bagura used his work for his own research, sending Mechadoc into a fury, even when Bagura told him his work didn't work properly.

This turned him cruel and bitter, and in the future while working under Bagura he secretly planned to usurp him and use his fixed works to cause chaos and destruction. To do this, he takes over Bagura's group, the Hige-Hige Bandits, and locks Bagura in a cage while telling him about his plan to collide two planets with his Bomb Crystal, just to get the treasure inside. Bagura is mortified at this, but Mechadoc calls him an idiot.

When Shirobon and the Jetters manage to get near to Mechadoc, he fuses himself with his experiments, becoming the "Dark Force Bomber", a terrifyingly evil creature. He is defeated, however he manages to escape unpunished and it is unknown what became of him.

Mechadoc is an insane, but genuis, scientist. He created great projects such as the MA- prototypes, eventually becoming the ultimate MA-X, a being as evil as him. He maniacally laughs when telling Bagura of his plan, and on numerous occasions he shows himself to be insane. 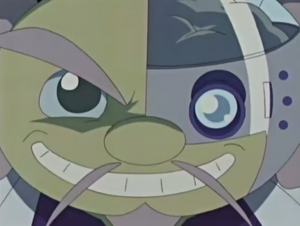 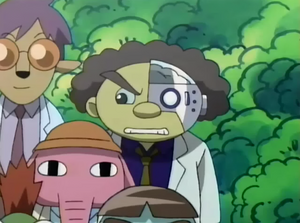 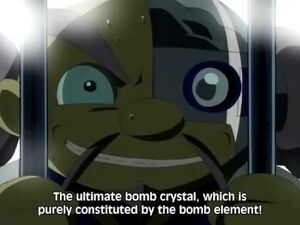 Retrieved from "https://villains.fandom.com/wiki/Dr._Mechadoc_(Bomberman_Jetters)?oldid=3889030"
Community content is available under CC-BY-SA unless otherwise noted.