He was voiced by the professional wrestler Sgt. Slaughter.

The Teen Titans turned into cars and drove to his military base to stop him. Dr. Military threatened to destroy the world and further explained his reasoning. He said that he had to pay off his massive and crushing student loan to veterinarian college, which was a laughable impossibility, given the pathetic salary he makes off of the very job he got by going to that school.

Dr. Military summoned his duck army to attack the Teen Titans. The Teen Titans used their newly gained car powers to fight back against the ducks and defeat them. Robin drove in circles around Dr. Military, causing him to get dizzy and drop his remote. Robin drove over the remote and crushed it, which blew up all the duck tanks.

Just then, the Teen Titans started to dry off, causing their car powers to vanish and they turned back to normal, making them powerless to stop Dr. Military. Dr. Military got into his car and pointed a giant laser cannon at them. However, it rained, which turned the Titans back into cars again.

The Titans chased Dr. Military down the streets and Dr. Military blasted his laser cannon back at them. Cyborg fired a missile at him but Dr. Military blew it up. Starfire drove past him and opened a drawbridge, thinking it would stop him, but Dr. Military just drove up the opening drawbridge like a ramp and made it safely to the other side. Raven tossed her cape over his windshield, blinding him and Beast Boy ate his laser cannon. Dr. Military drove into an alleyway as a way to escape the Titans, but Robin parallel parked right in front of the other side, which got Dr. Military to come to a rolling stop. However, he didn't stop in him and slammed right into Robin, which caused him to fly through his windshield and land on the ground.

The cops came to arrest Dr. Military but Dr. Military acted all nice and innocent and lied to the police, saying that it was the so-called "wild teens" that did all of that evil stuff and not him. The Titans tried to convince the cops that as the Teen Titans, the very idea of them doing anything bad was ridiculous. However, because they were in the form of cars, they did not look like the Teen Titans and the cops believed Dr. Military's story and arrested the Teen Titans, letting Dr. Military get away scot-free.

In part two of "Teen Titans Vroom!", The Teen Titans got impounded and sent to Car Jail, which they later broke out of. While on the lam, Robin did some research and found out that Dr. Military used to be partners with famous racecar driving legend, Chip Racerson Jr. before he got him banned by cheating. Chip Racerson Jr. said that he was still mad at Dr. Military for what he did to him all those years back and was more than happy to have him put behind bars. Unfortunately, Chip later ate some chips, which were laced with voice poison, which meant that he was unable to clear the Titans' names. Unsurprisingly, the chips were manufactured by Dr. Military in the very Top Secret Government Science Facility that turned the Titans into cars. 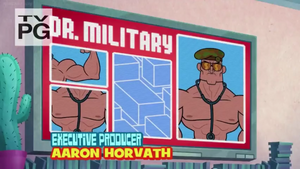 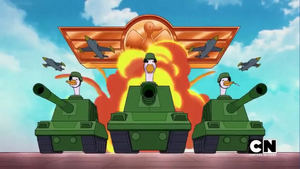 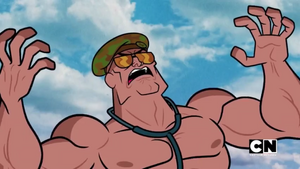 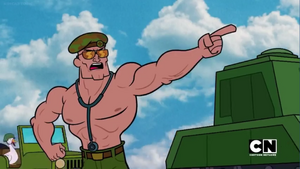 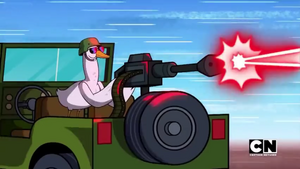 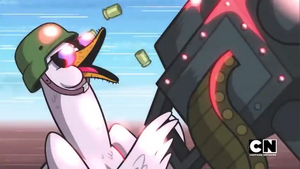 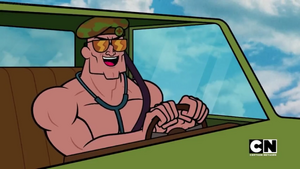 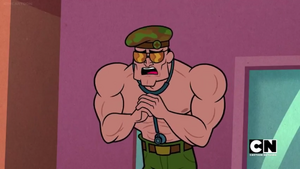 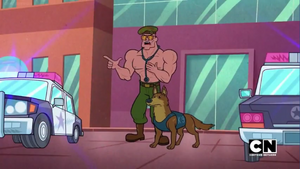 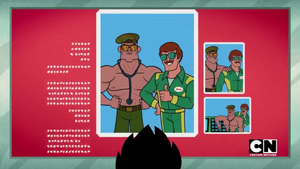 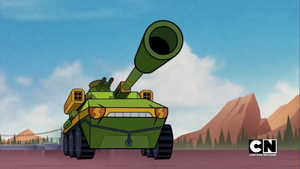 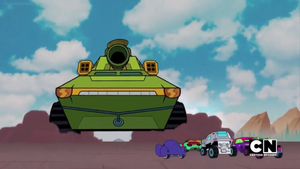 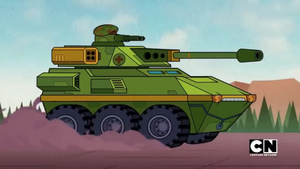 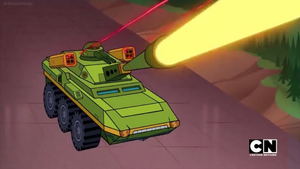 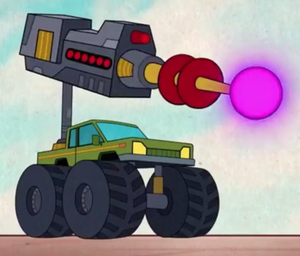