Working on his ultimate Machine Mutant.

Kill Goku and his friends (failed).

Dr. Myuu is a major antagonist in Dragon Ball GT and the creator of most of the Machine Mutants. He is the main antagonist of the second half of the Black Star Dragon Ball saga, the secondary antagonist of the Baby saga and one of the two secondary antagonists of the Super 17 saga alongside Dr. Gero. Despite being one of the main villains of the series, he never fought Goku or any of the protagonists for that matter. Instead he used his intelligence to create other villains to fight the heroes.

He was voiced by the late Kazuyuki Sogabe in the original Japanese version, Dave Petitt in the Blue Water dubbed version, and Duncan Brannan in the English FUNimation dubbed version.

Dr. Myuu is first introduced as an evil scientist who seeks to use the Dragon Balls to create the ultimate Machine Mutant. To do so, he created General Rilldo to act as an enforcer who could obtain the Black Star Dragon Balls for him, which had been scattered throughout the universe because of a wish made by Emperor Pilaf. However Goku, Pan, and Trunks managed to destroy Rilldo and foil Myuu's plans. He escaped, only for Baby to burst out of his body and kill him. Baby then revealed he had programmed Dr. Myuu, not the other way round.

Dr Myuu later teamed up with Dr. Gero while in Hell and the two worked together to create a duplicate of Android 17, named Hell Fighter 17. This duplicate succeeded in brainwashing 17 and the pair of doctors used their combined powers to create a portal out of Hell, which they and their new creation escape through, along with every other past villain. Once Hell Fighter 17 fused with Android 17 and became Super 17, Myuu revealed he had changed the android's programming, and had him kill Gero. Super 17 then managed to defeat all of the Z Fighters, even Super Saiyan 4 Goku, with help from his absorption field ability, which convinced Myuu he could finally take over the universe. However, Android 18 appeared and managed to get into Super 17's head, causing Myuu to order his creation to attack with his Shocking Death Ball. However, the android was angered by this and used that attack on Myuu, killing him yet again.

Myuu is a brilliant, yet mad scientist who desires nothing more than absolute control of the universe. He is also shown to be a treacherous and dishonest traitor, betraying Dr. Gero and having him be killed by Super 17.

Like nearly every villain in the Dragon Ball Series, Myuu can fly and generate Ki Blasts. He has genius intellect even rivaling Dr. Gero. He also has a weapon that he never seems to use, the Psychic Bomber. 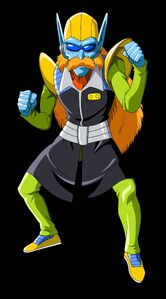 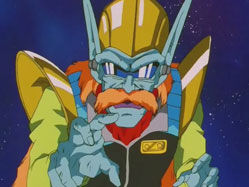