Villains Wiki
Register
Don't have an account?
Sign In
Advertisement
in: Doctors and Scientists, Elderly, Movie Villains,
and 32 more

Assist El Macho in his evil plot and betray him as well (second film; succeeded).

He was voiced by Russell Brand, who also played Creek in DreamWorks' Trolls.

Dr. Nefario is shown as an elderly scientist who works for Felonious Gru. He has a hearing problem that sometimes causes him to make mistakes (such as building a fart gun instead of a dart gun).

He told Gru that keeping the girls around would distract them from their plan of shrinking the moon, and persuaded him to give them up. He secretly called Miss Hattie to pick up the girls, telling Gru that he did it "for his good". Like Gru and the minions, he redeemed himself at the end of the movie.

In the sequel, Nefario leaves after being unable to do evil stuff for some time. Throughout the film, he was the one kidnapping Gru's minions while working for El Macho. After Gru realizes the truth and left, El Macho had Lucy taken away and sent one of the purple minions after Gru. This causes Dr. Nefario to turn back to Gru's side and fuses an antidote with the (bad tasting) jams and jellies to help turn the minions back to normal. In the end, he was seen with Gru's mother at Gru and Lucy's wedding.

Nefario also appeared in a cameo appearance in the 2015 prequel Minions, where he is seen as a young man attending the Villain Con in 1968 while presenting out his Freeze Ray, which he uses on his hand by mistake. 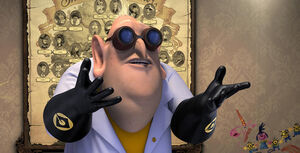 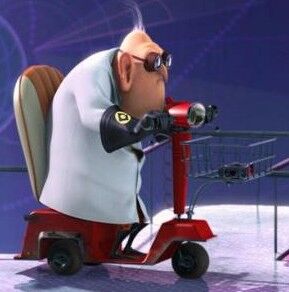