Writing in his digital diary about his schemes.

Assist Drek in his quest to build a new home for his people (formerly).

Get his revenge on Qwark.
Destroy the entire solar system, while he escapes from sight and memory (both failed).

Dr. Nefarious, also called Neffie, is the main antagonist of PlayStation's second full-length animated 2016 feature film Ratchet & Clank, and its tie-in video game on the PlayStation 4. Much like his original counterpart, Nefarious is an unstable mad scientist and the archenemy of Ratchet, Clank and Captain Qwark. However, unlike the original, who had some good qualities, this version is far more evil and destructive, as he planned to destroy an entire galaxy simply out of spite.

Like his original counterpart, he was voiced by Armin Shimerman, who also portrayed Letek in Star Trek: The Next Generation.

Dr. Nefarious was a highly insane, twisted, unstable, and psychopathic scientist. He even went as far to destroy his former boss, Chairman Drek, and proved to be even more psychotic and dangerous.

Prior to the events of the film, Nefarious was a member of the Galactic Rangers who specialised in the invention and design of weapons. Captain Qwark, his leader, would constantly mistreat and tease him, as well as underfund his department. As a result, he betrayed the team and became imprisoned, but escaped, having Qwark fooled into believing he died trying.

In the film, he would work with Chairman Drek to supply him with the weapons he needed to complete his goal of harvesting chunks of planets to build a new world. He builds the deplanetizer to accomplish this, and supplies him with warbots in an attempt to destroy the Galactic Rangers in Aleero City.

When his plans are thwarted, he suggests to exploit Qwark's desire for fame in order to use him as their inside man, which they expected would give him the insight needed to defeat Ratchet and the Rangers. Drek succeeded in using the deplanetizer to destroy Novalis, a habitable planet that was evacuated beforehand.

Later on, it is revealed that Nefarious had bigger plans above Drek, which was to destroy every planet in the solar system. He betrays Drek after preying on Qwark's guilt over betraying Ratchet and Clank, by turning him to a sheep and sending him to his newly-formed home planet. His plan was to use the deplanetizer on Umbris, a planet composed of tetragen in which such an explosion would cause a chain reaction in the solar system.

The Galactic Rangers infiltrate the deplanetizer and Ratchet confronts Nefarious directly. He nearly succeeds in hitting Umbris with the deplanetizer, but hits New Quartu instead, and gets defeated by Ratchet in combat. He seemingly gets disintegrated when falling into the laser chamber, but lands on an unknown planet and becomes rebuilt into a robot, before descending into maniacal laughter.

Nefarious and Drek staring, both irritated, at Victor von Ion.

Nefarious suggesting Qwark as the key for Drek's plans to dispose of the Galactic Rangers. 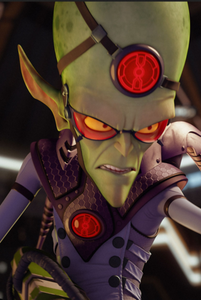 Nefarious arguing with and about to kill Qwark, Clank and Ratchet.

Nefarious about to betray Drek and both his Rising to Power and Evil Grin. 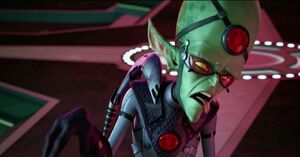 Nefarious at the end of the movie, in his new game-counterpart's robotic form.