Messing with time and creating paradoxes.

Dr. Nefarious Tropy (or N. Tropy for short) is an antagonist in the Crash Bandicoot video game series.

He was voiced by Michael Ensign in all of his appearances, except The Wrath of Cortex, N. Sane Trilogy and Crash Team Racing: Nitro-Fueled, where he was voiced by Corey Burton.

N. Tropy served as the secondary antagonist and the created Time Twister Machine in Crash Bandicoot 3: Warped!. He was summoned by Uka Uka to assist Dr. Neo Cortex in their plans from world domination. Tropy was the third boss faced in the game, but was eventually defeated by Crash who gained the Super Spin ability upon defeating him.

He also appears as a supporting character in Crash Bandicoot: Wrath of Cortex and an obstacle in some of the levels.

N. Tropy serves as the main antagonist in Crash Bandicoot 2: N-Tranced. He kidnaps Coco, Crunch, and Fake Crash so his friend N. Trance can brainwash them into doing their bidding. However, he fails to realise that Fake Crash isn't the real Crash Bandicoot until the doppelgänger is defeated in battle. Tropy leaves N. Trance to try and stop Crash while he escapes to parts unknown. Only after collecting the Gems and Gem Shards in the game will Crash be able to fight him.

His next major appearance would be in Crash Twinsanity where he teamed up with Nitrus Brio, believing Crash knew the location of a treasure. The doctors fought Crash after he escaped N. Gin's battleship, but are both defeated by the bandicoot. Tropy reappears later with other villains in the Tenth Dimension before the final boss fight.

He also appeared in Crash Team Racing as a secret unlockable driver who could be obtained by beating his set records for Time Trials on each track.

N. Tropy returns in Crash Nitro Kart . Again serving as an unlockable driver and a ghost for Time Trials. He is unlocked the same way as in CTR and is a part of Team Cortex.

N. Tropy returns again in the remaster for Crash Team Racing serving the same role he had in the original game. He is a Speed class driver.

N. Tropy is an evil, smug, arrogant, and treacherous person who has an unhealthy obsession with time. His personality is in contrast to Cortex's childish and short-tempered personality. N. Tropy acts with a calm and collected demeanor, complete with a smooth British accent. His quotes in all of his appearances in racing games include time jokes and stereotypical British comments such as "Blimey!" or mentions of tea. In a deleted scene from Crash Twinsanity, N. Tropy is shown to spill his tea as he heard Moritz talking about riches. Tropy is also highly intelligent and manipulative, his technological breakthroughs arguably the most advanced of all of Uka's scientists, although the doctor must constantly maintain his time traveling technology to make sure it all runs like clockwork (to the point he apparently shows signs of obsession compulsion). Otherwise the results could be disastrous; as previously seen with his Time Twister machine when he was not around to take care of it.

Tropy always acts cool-headed, however, behind that coldness, he is shown to be more weak-minded and aggressive than he looks as soon as anyone starts to irritate him: he is very quick to get frustrated when anyone doesn't listen to him, things don’t go his way, or he repeatedly misses his target. As a result, he tires easily, which makes him vulnerable in a fight. Like Cortex, N. Tropy is also highly pompous, irritable, and foul-tempered, venting his frustrations at his associates or blaming them for his errors, something N. Trance was perfectly willing to call him out on, without fearing him.

N. Tropy is highly intelligent and a bit of an engineer. As such, he can create highly advanced devices such as the Time Twister and a steam powered Time Machine that he wears like armor. With his TimeStaff and Time Machine Suit, N. Tropy is capable of manipulating matter, shifting time and emitting energy waves. 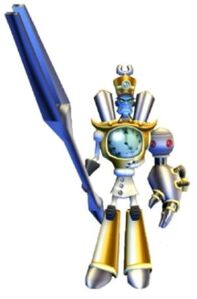 N. Tropy, as he appeared in Crash Twinsanity. 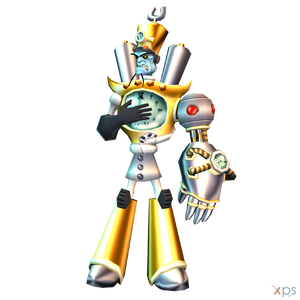 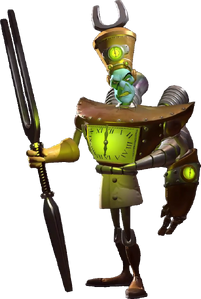 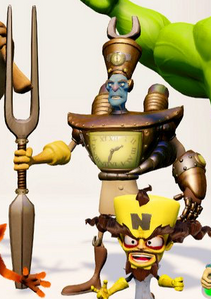 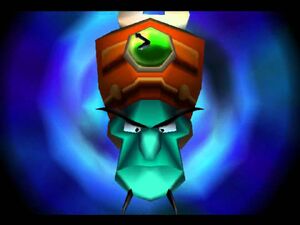 N. Tropy, as he looks in the dialogue scenes of Crash Bandicoot 3: Warped!. 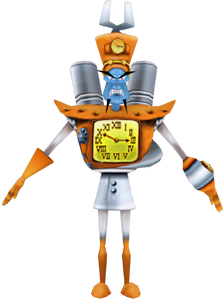 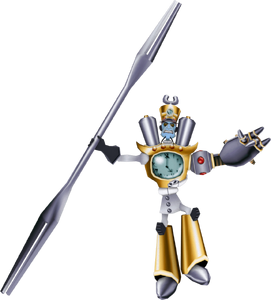 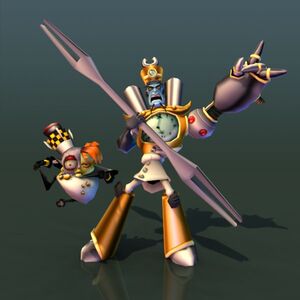 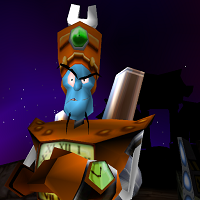 N. Tropy's model in the intro of Crash Bandicoot 3: Warped!. 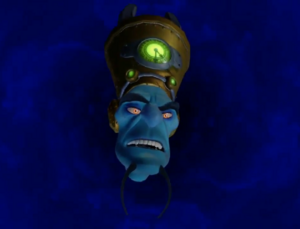 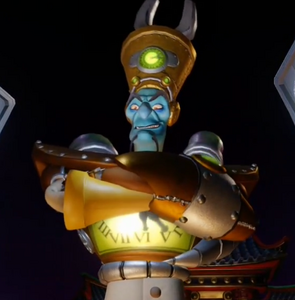 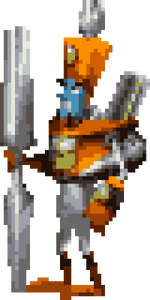 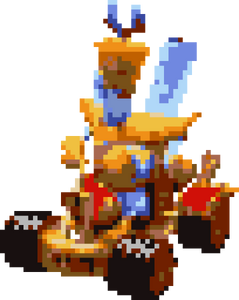 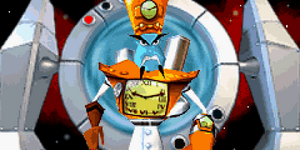 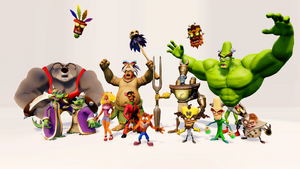 Retrieved from "https://villains.fandom.com/wiki/Dr._Nefarious_Tropy?oldid=3826036"
Community content is available under CC-BY-SA unless otherwise noted.