Frame Kit for his own crimes; kill Lana; continue to kill women.

Dr. Oliver Thredson (also known as "Bloody Face") is the false male protagonist in the TV series American Horror Story: Asylum and one of the two main antagonists.

He was portrayed by Zachary Quinto, who also played the villain Sylar in the TV series Heroes.

Thredson was abandoned by his 33-year-old mother at a very young age and sent to live in a government-based orphanage which he called "The System." He admitted that, growing up, he was more intelligent than other children. While attending medical school, Thredson identified a corpse of a 33-year-old woman with his lost mother, but attempts at embracing her in private caused him to become revolted with her cold skin which smelled like formaldehyde. Realizing his longing for a maternal presence, he sought out the touch of a live woman to replace his mother, which was that of a woman's skin. Thredson began kidnapping women whom he thought felt like that of a mother's. He skinned and beheaded any woman he found inadequate, disposing of the corpse and turning the skin into furniture and/or his "Bloody Face" mask.

Unlike most of the staff at Briarcliff, Thredson was initially stoically calm and clinical around patients, and had a less barbaric outlook towards treatment, saying that more compassion would greatly improve conditions for the patients. He was willing to look at the patients as more than just insane criminals, contrasting greatly with the sadistic treatment of Sister Jude. However, in his alter ego as "Bloody Face," he reverted to his darker side: an unhinged, sadistic murderer with deep-seated maternal abandonment issues.

Thredson first came to Briarcliff in order to judge Kit Walker's sanity to stand trial. He first believed Kit to be guilty and delusional, and diagnosed him as insane. Later, he complained to Sister Jude about the barbaric methods she employed upon her patients, further straining their already frail relationship, as Thredson was more convinced in the power of science than religion as a psychiatric tool. This was demonstrated when he offered his medical opinion to Jed Potter's parents when they tried to have him admitted to Briarcliff. When an exorcism was called upon Potter by Monsignor Timothy Howard and Father Malachi, he was invited to participate and tend to the boy's medical needs. (As it was later revealed via flashback that the possessed Jed knew Thredson's secret identity, it is implied that the "sedative" he administered to the boy was in fact a poison intended to kill him.)

When someone planted a newspaper relating to Jude's hit-and-run accident on her desk, she accused Thredson. Though he in fact intended to discuss Jed's death, by guessing that she was trying to protect her own guilty conscience, he accidentally implied that he had planted the newspaper, leading her to demand that he leave in two weeks. Lana Winters, who had grown to trust Thredson's calm and clinical manner, begged Thredson to send a letter to her ex-girlfriend Wendy. However, when he later reported back to Lana, he claimed to have found her house empty and disheveled, a tell-tale sign that Bloody Face had visited. With this evidence, Thredson admitted to Lana that he was now unsure of Kit's guilt. During Briarcliff's movie night, he noticed Lana, Grace Bertrand, and Kit's disappearance during the film, but did not report it, perhaps suspecting that the storm would drive them back inside.

Thredson later tried to question Lana about her disappearance, but she didn't admit that she tried to escape. He confided that he did not believe she belonged here and offered to help treat her homosexuality with more benign methods than Jude. He also believed Kit was neither guilty nor insane, but hoped that he would admit that the story of aliens abducting his wife Alma was a delusion. Thredson attempted to "cure" Lana of her lesbianism through chemically-aided aversion therapy, but eventually realized that the attempt was fruitless. Later, he visited her after a sleepless night, apologizing for resorting to the controversial therapy. Giving Lana a photograph of Wendy, he swore they would leave Briarcliff together at the end of that week.

In order to help his case, Kit let Thredson record him describing and admitting to the murders even though he still did not fully believe he committed them nor recall them. Thredson then helped Lana escape, taking her to his home. However, inside his seemingly cozy house, Lana began to notice several macabre objects, including a bowl seemingly carved from a skull and a lampshade made from human skin. Excusing herself to go to the bathroom, she accidentally opened a room filled with tools and human body parts while searching for an exit. Thredson discovered her and admitted they were all his; as a "hobby," he constructs furniture, primarily human-skin lampshades. He then pushed a button, sending Lana through a trapdoor. When she awakened, she found herself trapped in the clinical "Playroom" that Thredson kept in the basement, with another companion: the frozen, preserved corpse of Wendy. Thredson entered, encouraging Lana to continue her therapy by kissing Wendy, before donning a leathery mask partially decorated with Wendy's teeth. All along, Thredson was the real Bloody Face, and by "treating" Kit, he had framed him for his own crimes.

Lana awoke the next morning, still in the Playroom, chained to a metal bed, as Thredson prepared a croque-monsieur for her. He proceeded to tell Lana that his mother abandoned him and he grew up in the orphanage/foster home system. Though ostracized by his peers and made to continually feel "different," an event in medical school changed his life: an encounter with a female cadaver who had been the same age as his mother when she abandoned him. It was then he realized that his problems stemmed from a lack of a mother figure, causing him to continually seek out "replacements." All of his previous candidates proved inadequate, and he used his medical training to carefully skin and then decapitate them; he became convinced that Lana was the maternal replacement he had long sought.

Later, Kit called, confused that Thredson had given the taped "confession" to the police. When Thredson refused to help him, Kit became angry, calling him a liar and a bastard. Enraged, Thredson returned to the basement, catching Lana in the middle of an escape. This infuriated him further, making him feel abandoned by his "mother" again. As he donned his Bloody Face mask and prepared to kill Lana, Thredson began to cry. He revealed that he had overheard Lana "before Briarcliff" saying that even a monster such as Bloody Face had once been someone's baby; it was then that he believed that she would be the only one to understand him. Lana, grasping his meaning, attempted to play along with his fantasy, calling him "my baby." Emotionally overwrought, Thredson removed the mask and tearfully began to breastfeed from her.

Thredson later raped Lana while she was in a near-catatonic state and, having completed this action, felt that their relationship had reached an "impasse" and that he must kill her. In the ensuing struggle, Lana stabbed him in the crotch with his own hypodermic needle and escaped, only to become involved in a car accident and returned to Briarcliff. Thredson took care to destroy all the physical evidence of his crimes, fearing Lana would go straight to the police; upon reading of her car accident in the newspapers, he cornered her in Briarcliff, intending to use her skin to create a new Bloody Face mask and begin again. Before he could accomplish this, Thredson was knocked out by Kit. Kit and Lana then imprisoned him in a disused room near Briarcliff's bakery, hoping they could find a way to expose him as Bloody Face.

When Lana discovered that she had become pregnant with Thredson's child as a result of his raping her, she visited him. She informed him of her intent to have the child adopted, as Sister Mary Eunice would by no means allow it to be aborted. Horrified at the thought of his progeny experiencing the same torments he did, Thredson pleaded for Lana to give him a chance to be honest. To prove it, he confessed his crimes as Bloody Face and admitted why he performed each of them, only for Lana to reveal that his confession was being tape-recorded by Kit, utilizing the same trick that he used to frame Kit. Lana further claimed that she had already aborted his child, an act he deemed more despicable than any of his murders. When Lana later sneaked out of her room to kill Thredson, she found he had been released by Mary Eunice, who also revealed that their child, a boy, was still very much alive in Lana's womb.

After his escape, Thredson returned to Briarcliff, offered a more permanent position by Mary Eunice. Using this new authority, he intended to wait until Lana gave birth, then murder her again, keeping her alive only until she had breast-fed the baby. Knowing that Kit had hidden the taped confession incriminating him, he implied that he intended to torture the information out of him as "therapy." Later, while searching for Dr. Arthur Arden's sodium pentothal, he discovered Grace giving birth in the doctor's surgery, with Pepper acting as midwife. When Grace's baby was delivered, he used it and Grace as leverage against Kit, blackmailing him into telling him the location of the confession tape. When he went to find it, however, it had already been replaced with a copy of "See Spot Run"; Lana had hidden the tape again, and used that secret to blackmail him into not harming Kit or anyone else.

When Thredson attempted to convince Kit into finding out the location of the tape in return for his freedom, Kit stalled him to hide Lana's escape from Briarcliff with the aid of Mother Superior Claudia. Thredson caught on just in time to see Lana get into a taxi, hold up the tape, and display her middle finger at him. When he returned home that night, he found Lana waiting for him with a loaded gun; her tape had been delivered to the police, and they were on their way to collect him. Seemingly relieved that his secrets were at last out, Thredson went to mix a martini, wanting to taste alcohol one more time before imprisonment. At gunpoint, he admitted to Lana that he used Wendy's corpse for "practice," attempting several times to have sexual intercourse with it before finally turning it over so that she did not appear to be looking back at him. Later, following Lana's escape, he dismembered the body, burned it, and publicly discarded of most of the ashes.

As he went for a refill of his martini, Thredson speculated that Lana would never keep her baby; she agreed, but stated that even if she gave birth, he would be executed before he ever got to see it. Disagreeing, he pointed out that he was mentally ill, and therefore more likely to live under care than be sentenced for his crimes. As he eyed a gun in his drinks cabinet, intending to make Lana his final victim before he was arrested, she vengefully shot him through the back of the head, preferring this to the thought of his going to prison. 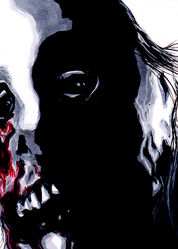 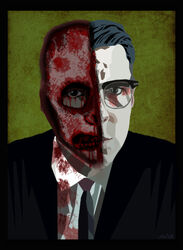 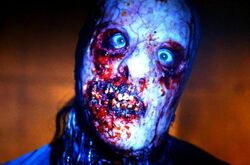 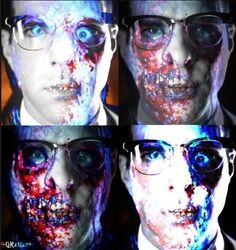 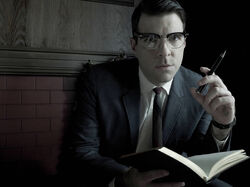 Add a photo to this gallery
Retrieved from "https://villains.fandom.com/wiki/Dr._Oliver_Thredson?oldid=1493016"
Community content is available under CC-BY-SA unless otherwise noted.