Villains Wiki
Register
Don't have an account?
Sign In
Advertisement
in: Cleanup, Doctors and Scientists, Mastermind,
and 68 more

Turn humanity into Seaviets to make it a "superior species".

Dr. Luther Paradigm, also known as Piranoid when he transforms, is the main antagonist of the animated TV series Street Sharks. He is an evil scientist who creates monsters with genetic experiments.

He was voiced by J. Michael Lee.

In the pilot movie (composed of the first three episodes) he obtained DNA from Ghengis Khan and Captain Blood to use on a swordfish and a lobster. Dr. Bolton, a respected scientist, tried to put a stop to Paradigm's experiments, but after injecting the swordfish and lobster with the DNA, mutating them into Slash and Slobster, he injected Bolton with DNA, transforming him into an unknown monster and taking his watch.

When Bolton's sons John, Bobby, Coop, and Clint came over to the nuclear power plant, he injected them with shark DNA, transforming them into anthromoporphic sharks called the Street Sharks (renamed, respectively, Ripster, Streex, Slammu, and Jab. However, they used their power for good and not evil.

Paradigm attempted to take over the city while maintaining a public image, claiming that the Street Sharks were dangerous and that Bolton transformed them. When Lena Mack told Guy in the Sky that Paradigm was responsible, he denied it and everyone believed him.

In an attempt to eliminate the Street Sharks's loyalty, which he perceived as weakness, Paradigm planned to inject them with piranha DNA. This went wrong, as the resulting battle caused Paradigm to be injected with it instead, giving him piranha-like features. This form is called Piranoid. The DNA was unstable, so he returned to his original form, only transforming into Piranoid when he was angry.

With the discovery of unstable DNA he sent Slash and Slobster to impersonate the Street Sharks in an attempt to frame them, however, Bends and Lena Mack revealed the truth to the city, and in a rage, Paradigm transformed into Piranoid, exposing him for the monster that he was. He attempted to use a smart bomb to destroy the city, however, the Street Sharks fought him in a final battle, ending with Piranoid grabbing onto a metal beam, Slammu biting it to send it falling, and Jab punching a hole in the ground below Piranoid, sending him falling to his apparent death before his lab was destroyed by the smart bomb, which the Street Sharks set to crash into the lab instead.

The final scene shows Piranoid's arm in the rubble moving upward, hinting that he may still be alive.

Paradigm returns as the antagonist of the TV series as well. He creates more Seaviates, and at one point injects himself with iguana DNA, thinking it was velociraptor DNA, and is known as "Iguanoid". He is captured in the final episode when Bends takes control of his minions, and is imprisoned. 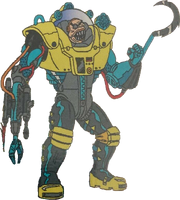 Dr. Paradigm with his standard armor and in his transformed "Piranoid" state.

His appearance after becoming "Iguanoid".

Seaviates are Dr. Paradigm's experiments who are loyal to him. 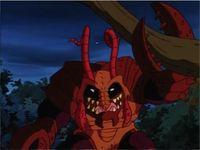 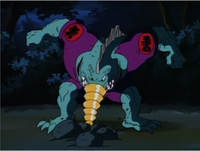 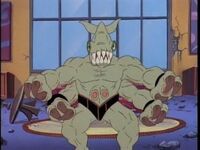 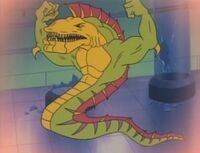 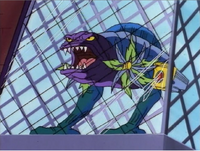