Founder of the Pickman Project Facility

Prevent himself from being killed by Daniel and Leo (failed).

Dr. Pickman is the secondary antagonist of the 2007 survival horror game Manhunt 2. He is the one responsible for what happened to Daniel Lamb, also being the head researcher of The Project, specializing in brainwashing and manufacturing drugs for military purposes.

He was voiced by Richmond Hoxie.

Dr. Pickman is a genius scientist who created the Pickman Project Facility. After his cruel methods of experimentation were exposed by the government, they stopped funding his experiments, so he resorts to underground research. After creating his greatest invention, Pickman's Bridge - a device which allows two personalities to co-exist, while they are not aware of each other - Pickman requires a human test subject. Daniel Lamb, his co-scientist, voluntarily becomes a test subject.

Pickman's Bridge malfunctions, resulting in Daniel Lamb being able to communicate with his second personality Leo Kasper, which leads to both Daniel and Leo initiating a massacre around Cottonmouth until it culminates with Leo murdering Daniel's wife with a kitchen knife while being possessed by Leo's murderous personality.

Pickman hypnotized Daniel in order to induce total memory loss and placed him in a Dixmor mental institution for 6 years alongside the other victims of Pickman's atrocious projects where they were abused by some of the staff there as one of his cohorts, Dr. Whyte, also attempts to remove the Pickman Bridge from both Daniel and Leo in order to cure Daniel while it is also revealed that Dr. Whyte opposed Pickman's horrific research.

Meanwhile, Pickman also continued his experiments illegaly as he ran a strip club known as "Strip Club and Fetish Dungeon" while hiring several sexual psychopaths known as the Pervs so that he could run a torture dungeon to gain more illegal funding via snuff filming and unwilling test subjects for his own experiments. He also ran a brothel known as Bee's Honey Pot for the same reason.

After escaping from the asylum and finding out Pickman's whereabouts, Daniel infiltrates into the research facility where Pickman is experimenting the Pickman Bridge by using chimpanzees, pursues Pickman, renders him unconscious with a tranquilizer gun and ties to a chair despite Leo being knocked out by Pickman first after Pickman quoting a line from a Shakespearean play. Daniel, possessed by Leo again, tries to force Pickman to remove the Bridge from Daniel's head, while Pickman calmly explains to Leo that with removal of the device, his personality will disappear from Daniel's head.

He then tries to convince Leo to untie him and even goes so far as using the code phrase meant to erase all Daniel's memories which is the same line from the Shakespearean play that he quoted to knock Daniel unconscious, but before passing out, Leo grabs a scalpel from nearby table and stabs Pickman three times in the heart, ending his life.

Pickman makes his last appearance as a thought-form hunter inside Daniel's mind, who claims that he didn't deserve to die and his experiments are not over and chases Daniel around with a tranquilizer gun. After Dr. Whyte and Daniel himself manages to get rid Leo from Daniel's mind, it is shown that Daniel lost all of his memories after the ordeal, proving that the victims of the Pickman Bridge had a rather high risk on being cured permanently with their memory still intact.

Before he was shut down by the government, Pickman is notorious for his unethical and inhumane experiments to the point it was in the exploitation territory. Despite this was not shown in the game proper, the folder of his atrocious experiments can be shown via Manhunt 2's official website, the Manhunt wiki itself in the Pickman Project section or this wiki in the Project Pickman section if people decided to do their research on Pickman's atrocious experiments. His experiments includes:

Dr. Pickman appears as a middle aged man who has a balding grey hair and a beard. Most of the time, he also sport a stern and serious look on his face, befitting as his profession on being a scientist. In addition, he also wears glasses, a lab coat with a grey shirt and a black tie tucked inside of it and a brown pants.

Pickman is a cruel, emotionless and calculative person, who will go to any lengths to achieve his goals. He is always calm and collected, even when he appears in person in Dixmor asylum while patients and personnel are fighting around him and when he is tied to a chair and interrogated by Leo, ordering and threatening him in a relaxed manner.

He seems to be involved enough to roam the territory of the researching facility on his own, seeking intruders and ordering his henchmen, but retreats deeper into the building after realizing that such a dangerous individual as Daniel Lamb is inside the facility. Pickman shows some degree of marksmanship proficiency while trying to defend himself from Daniel with a tranquilizer gun. 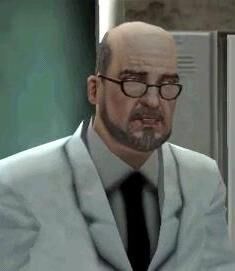 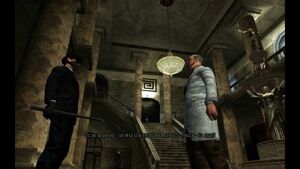 Dr. Pickman and member of the Watchdogs.

Dr. Pickman while in Dixmor Asylum.

Dr. Pickman is searching for his henchman after hearing suspicious sounds near the entrance to the facility.

Dr. Pickman's explaining to Leo what will happen to him during interrogation.