To have Janet be with him instead of George (failed)

He is played by Hugh Dennis.

Piers is the doctor at the Northolt Health Centre and serves as the corrupt boss of Janet Dawkins (later Sunday) and Mrs. Raven (the centre's receptionist). Despite saying to his patients that he's always here, Piers in reality cares more about his public image than his patients' welfare.

Besides working at the health centre, Piers also has a television career hosting a breakfast television slot called "Cure It With Crispin", which he cares about more than anything. He accidentally revealed to Janet that he faked his A-Level results in order to get into medical school.

Piers is in love with Janet and believes that she feels the same way, but she is in fact in love with George Sunday (the alias of Thermoman), who she later marries. Janet's parents Ella and Stanley greatly admire Piers and believe that Janet should be with him instead of George. In the third episode of Series 1 Mission Impossible, Piers discovered that George was Thermoman and attempted to blackmail him into leaving Janet, so he could have her to himself. However this fails, when George is able to erase Piers' memory. However the side effects causes Piers' hair to fall out (resulting in him wearing a cap and later a wig for the rest of the episode) and also loses his medical knowledge, such as not knowing what verrucas are or mistaking his stethoscope for Walkman headphones. However, George is able to get Piers back his knowledge by speed reading him a medical book from an American doctor, who turned out to be a vet. This caused Piers to be arrested after saying on a television interview that he shot patients who had a broken leg (referring to how vets would put a horse to sleep if it's leg was broken).

In the Series 2 episode "Nemesis", Piers is possessed by George's school rival Rovi Grubelddim (who wanted to put George out of his superhero job) and becomes a superhero called Miracle Man. As Miracle Man, Piers began taking Thermoman's clients and even seduces Janet. Luckily, George is able to defeat Miracle Man by beating him in a game of Rock, Paper, Scissors, which results in Rovi leaving Piers' body.

It is later revealed in the sixth series that the reason for Piers' behaviour was he was bullied at school and was treated badly by his parents, such as being locked in a cellar by his father and being ignored by his mother who was celebrating his brother's latest scout badge.

Also in the sixth series, Piers gains a new colleague in the form of George Monday (who is Thermoman's new human alias after losing his previous body in a poker game). 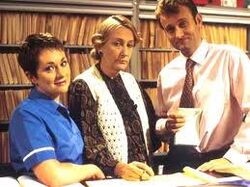 Piers with Janet and Mrs. Raven

Piers as Miracle Man
Add a photo to this gallery

Retrieved from "https://villains.fandom.com/wiki/Dr._Piers_Crispin?oldid=3305508"
Community content is available under CC-BY-SA unless otherwise noted.