Dr. Proton is the main antagonist in the very first Duke Nukem video game. He reappears in Duke Nukem Forever: The Doctor Who Cloned Me. His real name is Bluderwitz.

Blunderwitz was originally a brilliant professor. He was respected in the community of science. Blunderwitz's reputation and body changed after his accidental exposure to radiation. As the result, Blunderwitz's brain was altered and he lost his sanity. After the accident, Blunderwitz hid in the underworld for an unknown period of time.

While Blunderwitz was hiding in the underworld, he redisgned his own body by adding cybernetic modifications. Blunderwitz then renamed himself as Dr. Proton. Afterwards, Dr. Proton began to create robots which he named Technobots. He assembled an entire army of Technobots.

In 1997 Doctor Proton and his army of Techbots took control of Earth's largest city. He communicates with Duke by way of TVs found periodically on different levels. Half his face is covered by a metal plate and he moves around on a flying chair that shoots.

Proton had a secret hideout hidden deep underground on earth in the first episode. Proton has a base on the Moon (perhaps the Tiberius Station) which he escapes to when the first episode ends. When Duke catches him there, he escapes to the future with a time machine in the end of the second episode, but Duke follows him and destroys him there in the third and final episode. 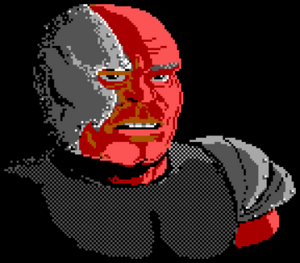 Add a photo to this gallery
Retrieved from "https://villains.fandom.com/wiki/Dr._Proton?oldid=3301413"
Community content is available under CC-BY-SA unless otherwise noted.