Dr. Pullum is an antagonist from the animated series Dan Vs., only appearing in the episode "The Dentist". He also appears in "This Game" as a boss.

He was voiced by Mark Hamill, who also played The Joker in Batman: The Animated Series, the Skeleton King in Super Robot Monkey Team Hyper Force Go!, Maximus in the Fantastic Four animated series, the Hobgoblin in Spider-Man: The Animated Series, Kavaxas in Tales of the Teenage Mutant Ninja Turtles, Stickybeard in Codename: Kids Next Door, Flint in Disney's Buzz Lightyear of Star Command, Niju in Balto II: Wolf Quest by Universal Pictures, Solomon Grundy in the DC Animated Universe, Fire Lord Ozai in Avatar: The Last Airbender, the Trickster in The Flash, Dictatious Maximus Galadrigal in Trollhunters, ShiverJack in Disney's Jake and the Never Land Pirates, Undergrowth in the Danny Phantom series, Agent Goodman in Disney's Recess: School's Out, and Alvin the Treacherous in DreamWorks' How to Train Your Dragon series.

Dan's tooth falls off and then he blames Dr. Pullum for the accident. When Dan returns to his office, he decided to threaten Dr. Pullum. Later, he was trying to get Chris to believe that Dr. Pullum is a supervillain. After showing codes to Elise for Dan to make Chris prove that he is a supervillain, Dan found out he actually is one and decides to chase Dr. Pullum down to his evil tooth-shaped lair. He realizes that Dan and Chris have entered his evil lair, so he sends his dentobots to take them down. Dan and Chris destroyed the dentobots though, and have physically entered his lair and stopped Dr. Pullum's evil plots.

After he stopped Dr. Pullum, Dan made his evil lair self-destruct. Dr. Pullum is last seen yelling "DAAAAAAAAAAAAAAANNNNN!!!!!!!!!!" after Dan destroyed his lair. 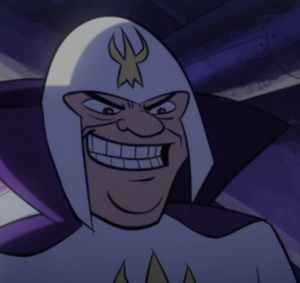 Dr. Pullum's evil grin.
Add a photo to this gallery
Retrieved from "https://villains.fandom.com/wiki/Dr._Pullum?oldid=3573171"
Community content is available under CC-BY-SA unless otherwise noted.