Villains Wiki
Register
Don't have an account?
Sign In
Advertisement
in: Articles under construction, Mature, Protagonists,
and 34 more

Flirting
Bowling
Hanging out with his colleagues

Get together with Dr. Allison Cameron (succeeded;briefly)

Dr. Robert Chase is the tritagonist of the Universal/FOX medical drama House MD.

He is the earliest and one of the most consistent (aside from Dr. Eric Foreman) members of Dr. Gregory House's Diagnostic team, working for him on and off throughout the course of the series. Although he does have usually good intentions at heart, he has done several morally reprehensible acts, and over the course of the series grows more and more insecure, turning him into a much worse person as a result thanks to several circumstances. Eventually after a genuine intervention from House himself though, he begins to return to his old self.

He was portrayed by Jesse Spencer who also voiced Liam McCracken in Phineas & Ferb.

Dr. Robert Chase was born in 1979 in Australia to the celebrity rheumatologist Rowan Chase, and his unnamed mother. He had a horrible relationship with both of his parents, his father often times being distant and acting somewhat neglectful, while his mother was an abusive alcoholic who regularly assaulted and psychologically tormented Robert, even locking him in the study for nights on end. Ironically enough however this is what inspired Chase to become a doctor, with him having nothing to do while being trapped and forcing himself to read the medical books his father had kept.

During some time in his early life Chase spent time in a seminary school, and as such was less cynical of faith, and even still practiced it on occasion compared to his co-workers.

Chase's mother grew ill when he was around fifteen, and his father fully left the family at this point, effectively destroying he and Chase's relationship. Chase cared for his mother until her death, and was later forced into caring for his younger sister and practically raised her. For unknown reasons however the two had a falling out overtime.

Chase moved to America in his early twenties, and was put under House's employment in 2001 as the first member of his Diagnostic Team.

Chase was joined on House's team by Dr. Allison Cameron six months prior, and by Eric Foreman three days prior to the show's opening episode.  TBA

At the start of the series, Chase was a fairly calm, laid back, and easy going man, although one with himself in mind above everyone else. While he was friendly with his colleagues, and managed to get along well with both Dr. Cameron and Foreman, he wasn't above throwing them under the bus should it serve him well, or keep his job secure. He was also a slight suck up to House, mostly because he feared him and getting fired, but also out of genuine respect and fondness for him.

As time went on he developed a fondness for Dr. Cameron and the two began having professional affairs at work, overtime eventually developing a real relationship. This continued on after House fired Chase, with him finally adopting a backbone and becoming a more free and independent individual to the point of even standing up to House and engaging in petty acts of trickery and mischief against him.

After his divorce from Cameron and subsequent return to House's team, Chase and House had a newly found respect and almost friendship with one another, and he developed a rivalry of sorts, with Foreman although remained friendly with him. He also developed friendships with his new colleagues Dr. Chris Taub and Dr. Remy Hadley (AKA Thirteen). However this was when his darker sides started emerging more, from killing Dibala onwards he was driven nearly insane by guilt, grew to become insecure about how the world perceives him and slowly but surely stopped caring about consequences.

In the end though he did begin starting fresh and changing his personality for the better, courtesy of a pep talk from House of all things.

At the start of the series Chase was a very pretty young man with soft facial features, blonde wispy floppy hair, pale skin, blue eyes, and a toned build. He was usually seen wearing the typical white coat which was standard for all doctors however he occasionally ditched it as part of his work attire, and instead opted for jackets such as a black leather one, or a tweed blazer.

His clothing sense was also quite preppy, with him usually wearing v-neck sweatshirts alongside dress shirts, ties, chinos and shoes. As a surgeon however he simply wore scrubs.

After getting divorced from Cameron, Chase cut his hair much shorter and grew out his stubble slightly but aside from that mostly looked the same. 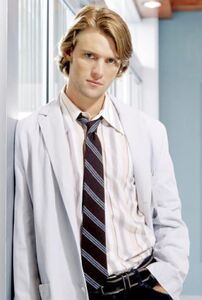