NOTE: This article is about the incarnation of Dr. Ivo Robotnik from the Sonic the Hedgehog (2020). The mainstream version can be found here: Dr. Ivo "Eggman" Robotnik.

Capture Sonic the Hedgehog and utilize his powers to achieve complete world domination.

Dr. Ivo Robotnik, also referred to as "Eggman", is the main antagonist of the 2020 live-action film Sonic the Hedgehog, which is based on the blockbuster videogame series of the same name developed by Sega. He is a brilliant yet unstable and narcissistic roboticist who is hired by the government to capture Sonic, although later plans to take Sonic's powers for himself in order to conquer the world. He is the film's adaptation of Dr. Ivo "Eggman" Robotnik from the video games.

Ivo Robotnik grew up as an orphan, which caused the aspiring genius even to begrudge the concept of friends and family. As a boy, during his school days, young Ivo got punched in the face by a local bully, humiliating him. Instead of reporting him to the school principal, Ivo achieved revenge through technological means, causing his hated young tormentor to spend the next three years, as Robotnik puts it, eating through a straw.

Dr. Robotnik makes his first appearance at the baseball field in the peaceful American town of Green Hills, Montana, where Sonic accidentally unleashed the burst of energy that caused a massive blackout. He and his assistant, Agent Stone, harass and belittle the military personnel there before dispatching an army of drones to locate the source of the energy surge. One of the drones discovers Sonic's footprints, and Robotnik uses his computer to analyze it. He determines Sonic's exact height, weight, and spinal structure, and discovers that no other organism in the animal kingdom matches Sonic's body shape. Realizing that Sonic must be an alien, Robotnik decides to find and capture the hedgehog and obtain his power for himself.

This leads Robotnik to the house of Sheriff Tom Wachowski, where he attempts to trick Tom into letting him into the house by claiming he is from the power company. When Tom doesn't fall for it, Robotnik forces his way into Tom's house and tries to compel him to reveal where Sonic is hiding. Tom tries to play dumb, but Robotnik is wise to the ruse. He notices one of Sonic's quills stuck in Tom's dinner table and becomes much more impatient, angrily demanding that Tom cooperate. Meanwhile, some mini-drones infiltrate the attic, where Sonic is hiding. When Sonic freaks out and rolls into the kitchen, exposing himself to Robotnik, Tom punches Robotnik in the face. One of Robotnik's drones sees this and goes into attack mode, but Sonic and Tom work together to destroy it.

After they escape, Agent Stone enters the house to check on Robotnik, only to be berated by Robotnik for not apprehending Tom and Sonic. Later, while they are on the road, Robotnik catches up to Tom and Sonic in his truck, and he dispatches a robotic car to destroy them. The duo fights back, which proves difficult since the car has several smaller units hidden inside that activate after the original vehicle is destroyed. They eventually manage to destroy the whole thing, much to Robotnik's dismay, but an explosive device from the car leaves Sonic critically injured.

Meanwhile, Robotnik turns to the quill he found at Tom's house, using his technology to analyze and extract the quill's power. Through this process, Robotnik discovers that the quill has unlimited power and realizes he could use this power to take over the world. Thankfully, Sonic recovers after being examined by Tom's veterenarian wife, Maddie, but the friends are still not safe from Robotnik. When the trio heads over to San Fransisco to retrieve Sonic's rings from the top of the Transamerica Pyramid skyscraper, Robotnik confronts them in an upgraded aircraft, accompanied by an army of drones. Mocking the egg-shaped design of the drones, Sonic calls Robotnik "Eggman" and challenges him to a fight.

As Dr. Robotnik readies his weapons, Tom frantically reminds Sonic that he and Maddie are completely defenseless against the evil genius, so Sonic comes up with a plan and pushes the couple off the building. Doctor Robotnik is shocked by this, but quickly downplays it by claiming that he was expecting to not expect something. He and his robots go to attack Sonic, but Sonic slows down time so he can disarm the robots. He then goes to use one of his rings to warp Tom and Maddie to safety, but at this point Robotnik's aircraft has tapped into the power of the quill, allowing the aircraft to travel at the same speed as Sonic as Robotnik tries to hit him with lasers.

Sonic is able to send Tom and Maddie back to Green Hills, but has trouble shaking off Dr. Robotnik. He travels all over the world using his rings, but Robotnik's super-powered aircraft is right behind him at every turn. Eventually, Sonic and Robotnik return to Green Hills, where Robotnik lands a hit and seemingly kills Sonic.

As Dr. Robotnik celebrates his presumed victory, Tom, Maddie, and the other residents of Green Hills stand up to him. Then Sonic, who turned out to have survived the hit, wakes up, musters up all of his power, and bashes Robotnik's aircraft, while Tom uses one of Sonic's rings to open a portal to a world filled with nothing but mushrooms, aptly named "Mushroom Planet". Robotnik's ship flies straight through the portal, leaving the doctor stuck on the Mushroom Planet. There, a stranded Robotnik loses what was left of his sanity, shaves his head and treks through the alien landscape, planning to use the energy from Sonic's quill to find a way back to Earth. It's currently unknown if Robotnik will ever escape from Mushroom Planet or remain there for the rest of his life, but given his intellect and the properties of Sonic's quill, it's likely that he will indeed find a way to return to Earth soon so he can enact his revenge on Sonic and Tom.

From the American government's description of Dr. Robotnik, he is said to be insanely over the top and weird to socialize with, which is why they were so hesitant to get him on the job. This is not far from the truth, as Robotnik is an egotistical, self-absorbed, misanthropic, and narcissistic man, who views the idea of having friends to be irrelevant to him and does not like having his authority questioned or challenged in any shape or way. His nature stems from his past. He was orphaned as a child and at school, he was bullied by another student. He views also his henchmen as completely disposable and he treats them very badly. Similarly to how outrageous of a personality his game counterpart may be, Dr. Robotnik can get into the zone of his own over-the-top behavior in having a lot of fun with himself, as he is seen dancing around his lab while creating his prototypes and inventions. However, do not be led into believing he is remotely idle or foolhardy: beneath his eccentricities lies a very sharpened and ruthless mind, and while Robotnik is not only cruel for the sheer sake of cruelty, he also has no concept of right or wrong and will go to absolutely any lengths, regardless of the cost, in order to fulfill whatever ambitions he sets his mind to. Completely uninterested in the concern of others, be they bystanders or opponents, Robotnik will remorselessly kill anyone who stands in his way. He is also noticeably much more level-headed, mature, witty, suave, charismatic and pragmatic than most of his other counterparts and has better control of his emotions and impulses.

Robotnik is a tall, (and unlike any of his other incarnations) lean, slick man with a full head of chocolate brown hair in an undercut style, along with a large elegant mustache and fair skin. Throughout most of the film, he wears a long black trenchcoat and an all black suit, black boots and specially modified gloves. Later on, he ditches the trenchcoat instead for a red waist length jacket with black and brown accents as well as spandex leggings, he also wears goggles with this outfit. He also has a normal, healthy-looking nose.

Later, while trapped on the Mushroom Planet, Robotnik is shown to have adopted an appearance more akin to his videogame counterpart, having shaved himself completely bald while his clothes are rendered tattered and his mustache has grown wildly out of control and turned orange. 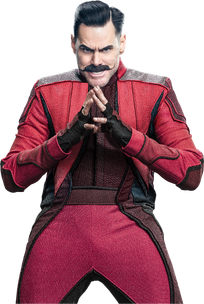 Doctor Robotnik in his earlier outfit 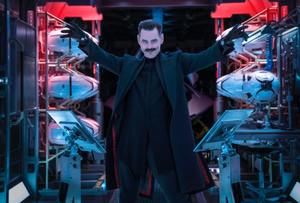 Doctor Robotnik about jam into his "Tunes of Anarchy".

Dr. Robotnik as he appears in the Sonic the Hedgehog movie.

Dr. Robotnik revealed to still have one of Sonic's quills. 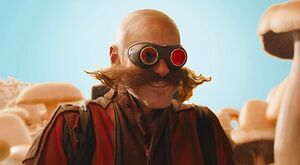 Dr. Robotnik as he appears at the end Sonic the Hedgehog movie.
Add a photo to this gallery

Retrieved from "https://villains.fandom.com/wiki/Dr._Robotnik_(2020_Film)?oldid=3589057"
Community content is available under CC-BY-SA unless otherwise noted.