NOTE: This article is about the Archie Comics villain - you can find information on the mainstream version in Dr. Ivo "Eggman" Robotnik. For modern version of Dr. Ivo Robotnik from Archie Comics see Dr. Eggman (Archie Comics).

Maintain his rule over Mobius

Destroy Sonic the Hedgehog
Eliminate anyone who oppose him

Dr. Ivo Robotnik, born Julian Kintobor of the House of Ivo and also known as Robotnik Prime, was the archenemy of Sonic the Hedgehog and the Freedom-Fighters for a long period of time and the primary antagonist during the first few sagas in the Archie Comics. Eventually Robotnik Prime has been killed and replaced with an alternate version of Dr. Ivo Robotnik under the nickname of Robo-Robotnik, who later took an alias Dr. Eggman.

Archie Comics introduced Dr. Robotnik as a near-omnipotent tyrant of colossal might. He was very much a successful and dangerous criminal mastermind in his reality and almost succeeded in conquering all of Mobius, however he was also very arrogant and cruel - two traits that ensured his downfall as Robotnik would often underestimate his opponents and would fall prey to hubris as he liked to toy with enemies rather than destroy them when he had the chance (though not to the same extent as Robo-Robotnik).

He was also abusive towards his right-hand minion and nephew, Snively, this was another trait of the dictator that would prove his downfall as he underestimated Snively's own potential for villainy and thus didn't view him as a threat at all (when in reality Snively was much smarter and traitorous than Robotnik could of imagined).

Like his counterpart from "Sonic the Hedgehog" cartoon series, Archie's Robotnik was a surprisingly dark and heartless monster, vastly differing from his in-game counterpart. However, he would occasionally take part in humorous plots, inheriting some "laughable" traits from a version of Robotnik from "Adventures of Sonic the Hedgehog" cartoon series (as evidenced in the creation of Scratch and Grounder). He would also team up with Sonic if another villain was able to overpower them both.

Archie's Robotnik was a military leader and gained power via usurping the royal House of Acorn. This coup drove Princess Sally into hiding alongside many others - they would become known as the Freedom Fighters. Robotnik also mastered the art of roboticization, which he used to transform anyone foolish enough to oppose him into robotic slaves starting with the city of Mobotropolis.

This process was once thought to be irreversible and Robotnik often used it to inspire terror in the hearts of his enemies but recently it has been revealed that the process can be reversed - it is also possible for beings to become partially roboticized, such as Bunny - who was saved from her fate by Sonic and the Freedom Fighters.

The Archie version of Robotnik is also the only version of Robotnik to have officially been killed and has been replaced by Archie's version of Dr. Eggman - who is also very different from Robotnik's videogame incarnation. After the Super Genesis Wave reshaped reality, he fused with his alternate counterpart making them one in the same. 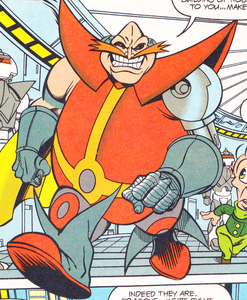 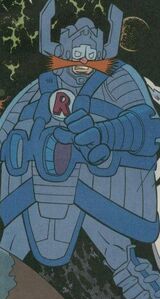 Robolactus, Robotnik's descendant
Add a photo to this gallery

Retrieved from "https://villains.fandom.com/wiki/Dr._Robotnik_(Archie_Comics)?oldid=3264384"
Community content is available under CC-BY-SA unless otherwise noted.