Firing lasers and rockets from his robot arm

Put an end to free-will.

Destroy Sonic and the Freedom Fighters.
Get the Deep Power Stones and gain control over their magical powers.
Control Mobius' entire population through Roboticization (all failed).

Dr. Julian Robotnik is the main antagonist of the 1993 Sonic The Hedgehog cartoon series, commonly known as Sonic SatAM.

He is a despotic mad scientist bent on turning all life on planet Mobius into robotic slaves for him to rule over and the archenemy of Sonic the Hedgehog. By the time the series starts, Robotnik has already conquered Mobius and converted most of its inhabitants into robots, with only a small group of Freedom Fighters led by Princess Sally and Sonic to oppose his tyrannical reign. He has an incompetent nephew named Snively and a pet robotic rooster named Cluck.

He was voiced by Jim Cummings, who also voiced Fuzzy Lumpkins in The Powerpuff Girls, Steele in Balto, Ed the Hyena in The Lion King, Peg Leg Pete in Goof Troop and NegaDuck in DarkWing Duck.

Dr. Robotnik was once a man named Julian living on the planet Mobius, serving as the War Minster for King Acorn of Mobotropolis, as well as the assistant of a dark wizard named Naugus (the only person that he fears the most). After the Great War was ended due to Julian's responsibilities, he formulated a coup d’état against King Acorn with his own army of SWATbots, taking control of Mobotropolis and renaming it as Robotropolis. He then betrays both King Acorn and Naugus by banishing them to a limited dimension called the Void, with an angry King Acorn declaring to Robotnik that he will pay for his treachery and an angry Naugus swearing revenge on Robotnik for the same reason.

During his coup, Robotnik stole an invention called the Roboticizer (which was invented by one of the King's trusted knights, Sir Charles Hedgehog, the uncle of Sonic the Hedgehog) and used it to turn 95% of the city population (including Sir Charles) into robots. This event led Sonic, as well as the King's daughter Princess Sally and several others, to form a resistance group called the Freedom Fighters, bent on ending Robotnik's rule.

During the first and second seasons of the series (which takes 10 years after the successful coup), Robotnik formulates several plans that would involve crushing the Freedom Fighters or endangering Mobius, such as finding out their secret hideouts, creating an aerial vehicle called a Destroyer that can locate and destroy living tissue, or polluting the atmosphere with toxic rain. Needless to say, Sonic and the Freedom Fighters take in their guts to foil these schemes, much to ire of Robotnik.

In the final episode of the second season, Robotnik came up with his ultimate plan: creating the Doomsday Machine known as the Ultimate Annihilator that will turn Mobius into a wasteland. As he puts his machine into action to start threatening Mobius, Sonic and the Freedom Fighters enact their plan to stop him. In the end, Sonic and Princess Sally locate the Deep Power Stones, which allowed them to destroy the machine with Dr. Robotnik still in it, thus leading to Dr. Robotnik's demise.

Driven mad by his failure to crush the resistance and taking over Mobius, Robotnik rants out how much he hates Sonic while attempting to escape. He was seemingly killed when Sonic and Sally finally destroyed his doomsday base.

In the third season, it was supposed to be revealed that Robotnik was actually banished into the Void, where he would become a servant again to Naugus (who would take over as the new villain). However, the show's abrupt cancellation prevented this, leaving the show's cliffhanger unresolved.

Robotnik is a human who stands taller than the Mobians, and about five times taller than Snively. He is morbidly obese, although surprisingly fit and muscular, and possesses odd features for a human, such as black and red eyes, three fingers and a cone-shaped head. In place of ears, he has small, metallic devices that presumably fill-in the role of ears.

His left arm is also robotic, as a time-traveling Sonic knocked him into the Roboticizer. He wears a red and black jumpsuit, with a short sleeve showing his well-muscled organic arm, pointy shoulder pads, and has a yellow or golden cape and black gloves.

Doctor Robotnik is a cruel, sadistic, cantankerous, vicious, chaotic, unsympathetic and ruthless individual. He has a relatively short temper and is often brash, scornful, and overconfident with his designs. A personal grudge he holds against Sonic frequently clouds his better judgment. This is shown when he took the chance to fire a missile at Sonic even though his escape pod was short on fuel and if he fired the missile, he would crash (but the missile didn't fire because of damaged circuitry). However, despite sometimes being almost as goofy as his other incarnations, he was still a very unpleasant and repulsive character, and was not above lying, backstabbing, and murdering to accomplish his goals.

In Season One, he had a deep echo in his voice and was portrayed as a calculating, calm, composed, and somewhat sarcastic villain, with a droll sense of humor, and was accompanied by a robotic chicken called Cluck. In Season 2, he lost Cluck, the deep echo in his voice was removed, and thanks to Sonic and the Freedom Fighters hindering his global conquest and generally foiling his plans, Robotnik's mental state became increasingly unstable, as he would often lose his cool, overreact, and lack common sense, causing him to lean slightly towards his more insane, comedic SEGA and AOSTH counterparts, but he was still a very intimidating villain.

An important subject to note is that, unlike the humorous version from the other cartoons, this version of Robotnik is a surprisingly serious and evil monster. He is willing to deprive innocent creatures of their free will to get them to work for him, he is willing to turn formerly beautiful communities into severely polluted wastelands, and he doesn't show any remorse for any of his actions. He turns anyone into robotic slaves if they don't obey him. There are episodes in which some robots are carrying on secret conversations with their loved ones, from before roboticization, only to double over in pain before proceeding to attack said loved ones because of the control Robotnik has over them.

He has also tried to roboticize Sonic to be his slave several times, but this has often failed. However, he later admitted that he considered Sonic to be "a most worthy adversary" and, when he was moments from roboticizing Sonic, said that he was "almost sorry that it's over".

Even though Robotnik is a tough guy, like any military strategist, he understands that he isn't indestructible, and when an enemy gains the upper hand, he will turn tail and run. Naugus, the powerful wizard had been double-crossed by Robotnik, and due to his vast experience of magic, he had Robotnik cowering at his feet and fleeing him in fear. Another example is where Sonic and Sally were using the power stones to effortlessly slice through metal, and destroy the Doomsday Machine, Robotnik understood all too well that he had been defeated, and fled in an escape pod.

Robotnik has an amazingly high I.Q, being able to convince King Acorn he is kind, even when he has red eyes, building swat-bots, a ship that can transform (or roboticize) entire cities, and stealing Sir Charles' roboticizer plans. He has created a dinosaur robot, hovering peace-bots, a yellow, sighthound-like robot to race against Sonic, robotic vines, a one-eyed slug-like robot, and built a ping-pong machine, inside a metal pyramid.

Robotnik is imaginative and knowledgeable, if Robotnik can imagine something, he can probably build it. He frequently convinced various other Mobians he is an ally, and earned their trust, even though he looks outwardly creepy, a testament to his manipulating skills, and betrayed everyone who helped him, even his nephew in the end.

He is also a master strategist, and schemer. Despite his bulky frame, Robotnik's dazzling I.Q is paired with a surprisingly fit and durable body, since Robotnik has survived falling from great heights, live through explosions, can climb steep mountains, and he is also very capable of physical combat. His mechanical appendages are very helpful, as his red eyes can glow in the dark and act as flashlights, he can levitate via rocket boots, and fire lasers from the fingers on his robot arm.

His biggest weaknesses are his overconfidence, inability to take criticism, and fear of magical and otherworldly things.

The model sheet for Dr. Robotnik. 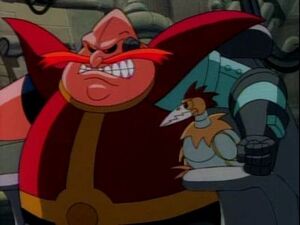 Robotnik, as he appears in the intro. 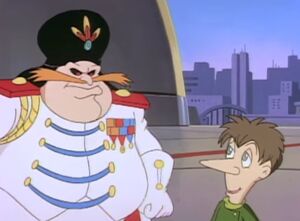 Warlord Julian, before he seized Mobotropolis and rechristened himself as Robotnik, accompanied by a young and not-bald Snively. 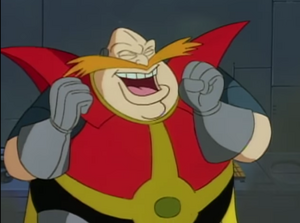 One of few comical moments for Robotnik, when he realizes that Sonic and Naugus might be working together. 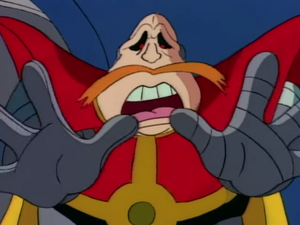 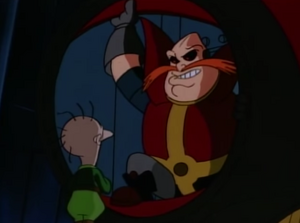 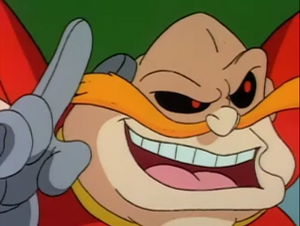 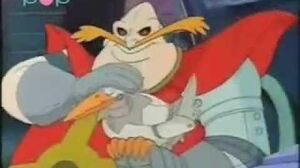