Research director of the DBR Corporation

Researching a cure for his son Daniel.

Find a cure for his son Daniel (succeeded).

Unleash a horde of zombies (succeeded; dies in the process, however).
Destroy and resurrect everything.
Persuade Daniel to join his side (all failed).

Dr. Roy Curien is a major antagonist in The House of the Dead game series. Once a renowned scientist, he was driven mad by his own research and unleashed a horde of zombies upon his staff and threatened the world with destruction. Curien later returned in The House of the Dead III, which explores his past motives involving his relationship with his son Daniel through a series of flashbacks. He was "resurrected" as the game's final boss, the Wheel of Fate.

Curien is an intelligent scientific researcher who seeks upon destruction of mankind. He is also shown to be insane, guiltless and remorseless in the first The House of the Dead videogame, as he unleashed and watches his creations massacring, even on his own staff. Curien also sees Thomas Rogan, G and the AMS as no threat.

Despite his evil intentions, in the flashback of third game, he is shown to be a loving father and has a more deeper sympathy in his character. He would do everything to save his son's life, even it means to cross the borderline of life and death. It is implied in the first and third games, he was possibly a generous scientist who wanted to solve the world and humanity's problems but insanity took the best of him due to his obsession with his research.

Doctor Roy Curien is an eminent scientist working under the DBR Corporation as a research director, whose aggressive direction gained the admiration and respect of his staff. Among his researchers was Sophie Richards, who was engaged at the time to AMS agent Thomas Rogan. Born of a noble family, Curien lived with his son in a mansion built in medieval times, where the DBR research facility was also located, hiding the nature of its experiments from the public. While Curien was performing experiments in hopes of removing the barrier between life and death, his findings eventually caused him to go mad.

And one day in December 1998, Doctor Curien released his undead creations upon his staff. Seeing that everyone around her was getting killed, Sophie made an urgent call to her fiancé for help. Rogan and his partner G arrive as quickly as possible, and they infiltrate the zombie-infested mansion to stop Curien and his creations from causing any more chaos.

The agents finally encounter Doctor Curien in person deep underground, where he compliments their efforts before summoning a large undead beetle-like monster to take care of them. The agents defeat the creature while Curien takes the opportunity to escape, and they soon chase him further underground, where he awaits them in one of the laboratories below. When the agents have him cornered with no way out, Curien once again compliments them but boasts that they will never be able to stop him, letting them bare witness to the awakening of his master creation, the Magician. However, the Magician does not recognize Curien as its creator and, refusing to take orders from a lesser being, attacks him. Mortally wounded, Curien just has time to express his confusion regarding his creation's loyalty before succumbing to his injuries.

After the Magician is destroyed by the AMS agents and they take their leave, the head of the DBR Corporation, Caleb Goldman, visits the mansion and takes all of his research as well as Curien's corpse. While the incident would be regarded as the Curien Mansion Incident in The House of the Dead 2, it is revealed that Goldman had financially backed Curien's research and simply used him to further his own goals. Like his predecessor, Goldman would meet his demise when his own plans failed to come into fruition in 2000, but not before arranging a backup plan that would lead to the world's collapse in 2003.

Curien is seen in a flashback in the game's introductory sequence.

Dr. Curien's discoveries play a large role in The House of the Dead III, which explores his past as well as his previous motives through flashback segments. It is revealed that several years before the Curien Mansion incident, Curien was seeking a cure for his son Daniel, who was terminally ill with doctors claiming he had no hope of recovery. Curien, portrayed as a loving father who would never give up on his son, claimed he was willing to step into forbidden territory if it would save his life. After carrying out many experiments, Curien revealed that he had discovered the key that would remove the barrier between life and death, and that there was no need for his son to fear death any longer. He later appeared to his comatose son again, asking him if he had overstepped the bounds of human morality, confused and somewhat depressed that many of his researchers had left him. However, Curien soon descended into madness after realizing that he now held the power to manipulate life and death at his will.

During the actual events of The House of the Dead III in 2019, it is revealed that the Wheel of Fate was Curien's final creation following his death and the last thing he left behind. Curien would be used as a testing subject by an unknown source (most likely Goldman) and undergo a resurrection process that would take nineteen years to complete; (some have speculated that this is why Goldman appeared before Curien's corpse after the mansion incident, and what he had done with it, but this remains unconfirmed). His son Daniel, who had spent his whole life in the facility and was now cured of his disease, watched his father transform into the Wheel of Fate, for the last nineteen years and was finally prepared to put an end to it. Before awakening the being, who had become one with Curien himself, Daniel hacks the program to give him and Lisa Rogan an opening advantage. When Lisa questions if Daniel really wants to fight his own father, he claims that he is ready to carry the burden of his father's crimes and that the future of the world belongs to the people who are alive here and now.

With the Wheel of Fate awakened, it identifies itself as Curien and reveals its motives to destroy mankind, with the intention of rebuilding it without the conflict associated with humans. The Wheel of Fate then engages the pair in a fierce battle, attacking them relentlessly through the power of electrokinesis, but is finally defeated. Curien then tries to make one last appeal to Daniel, claiming that the world is overpopulated and that his son still needs him. Daniel rejects his father and all that he has become, and he and Lisa open fire, destroying Curien for good.

House of the Dead: Scarlet Dawn

Curien has contained his son Rudy (the protagonist of the first movie) and another survivor Alison to try and find out the cause of the latter's immortality, despite the rotted state of her body. Curien creates a serum which he believes can bring back the dead and create immortality. He murders one of his students at the university he works for and injects her with the serum. She comes back to life, bites Curien, and makes her escape. He is later seen as a zombie. Walking to back of a restaurant, the chef gives him food, but ends up biting him on the hand. In this version however, he is addressed as Professor Roy Curien.

Dr. Curien appears as one of the four currently playable The House of the Dead characters in SEGA Heroes. 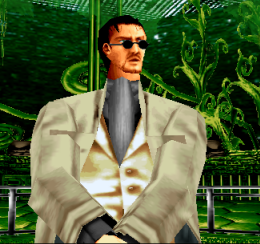 Curien during the intro. 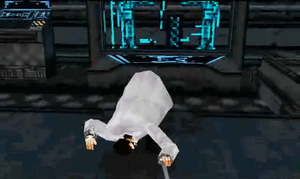 Curien's demise in The House of the Dead. 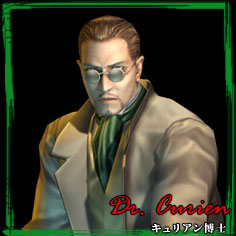 Curien's appearance in The House of the Dead III. 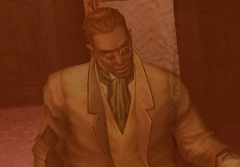 Curien in a flashback sequence in The House of the Dead III.

Curien seen in the sequence in The House of the Dead: Scarlet Dawn.

Curien seen along with Goldman and Thornheart in a photo together. 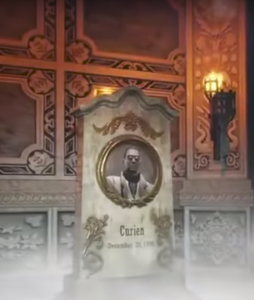 Curien's gravestone seen in the final chapter.
Add a photo to this gallery 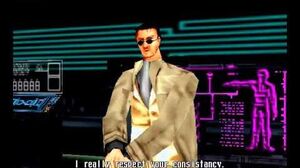 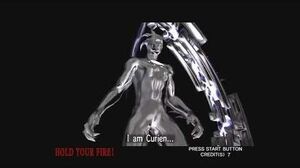 House of the Dead 3 HD - Final Boss and Ending - Zovember 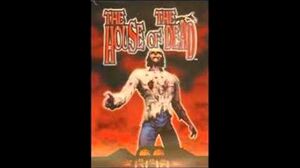 The House Of The Dead OST. Truth Dr. Curien
Add a photo to this gallery

Retrieved from "https://villains.fandom.com/wiki/Dr._Roy_Curien?oldid=3890890"
Community content is available under CC-BY-SA unless otherwise noted.