One of four leaders of V.I.L.E.

Teacher of science and weapons
Scientist

Saira Bellum, also known as Dr. Bellum, is one of the main antagonists of the Netflix 2019 series Carmen Sandiego, along with Coach Brunt, Professor Maelstrom, and Countess Cleo.

She was voiced by Sharon Muthu.

Dr. Saira Bellum is a short, possibly middle-aged woman with dark skin, and dyed-white hair. She is usually seen wearing a shoulder-padded lab coat that extends down to her feet. She wears goggles over her eyes at all times.

Dr. Bellum is easily distracted, and often has a hard time focusing on one thing at a time, but she still is evil to the bone. She has no problem with putting hundreds of thousands of lives in chaos and even at risk of death, as her plans in Auckland proved. She did have a soft spot for Carmen Sandiego when [Carmen] was young and she and the other leaders of V.I.L.E. took her in. However, when Carmen turned on them, she wasn't hesitant to do her harm.

Although originally from India, Dr. Bellum was a scientist who had a penchant for inventing elaborate devices. Nothing is actually known about Brunt's past except that before the events of Carmen Sandiego, she sometime joined V.I.L.E., eventually working her way up to the top to jointhe Faculty.

Some years ago, Bellum (along with her fellow faculty members), dispatched a young Shadowsan to spy on and assassinate (if necessary) Dexter Wolfe, their fellow faculty member, after discovering him going off the grid longer than normal and moving V.I.L.E. assets into personal Swiss bank accounts. however, Shadowsan failed in his mission, due to the Interpol interference and a young agent shooting Wolfe dead by a young chief, and instead brought back Wolfe's baby daughter (who would later grow up to be Black Sheep and Carmen Sandiego) back to the Isle.

After the incident in Morocco, Bellum monitored Black Sheep, hoping it would make her more complacent to V.I.L.E. for her remedial year knowing she was being watched.

For season one, she is first seen in a flashback when Carmen Sandiego recounts her backstory to Grahame. She was one of the five rulers of V.I.L.E. and also took care of and taught Carmen (then called 'Black Sheep.' She was in charge of teaching students how to use her weapons, such as the "crackle rod", which is seen throughout the rest of the series. It gives off different variations of electric charges, some will disable phones, others can even kill.

Later in the season, she manufactures a fungus capable of eating entire fields of rice within a short amount of time. It was planned to be launched via fireworks in Indonesia during a festival, where it would destroy nearly all of the nearby rice fields, thereby forcing the residents to buy V.I.L.E.'s foul imitation rice. It was stopped by Carmen, and V.I.L.E. wound up with entire warehouses full of rice with no one to sell it to.

In season 2, Dr. Bellum travels to Auckland, New Zealand and creates a device capable of sending out a large electromagnetic pulse. The pulse would have been so devastating that it would knock out all the electric devices in the city, destroying cellphones, rendering hospitals useless, and wiping out airplane towers. Before she could set it off, however, Carmen Sandiego and Grahame sabotage it and cause it to explode instead, leaving her efforts wasted.

Due to V.I.L.E. Island being destroyed, Dr. Bellum (alongside Professor Maelstrom, Countess Cleoand Coach Brunt) were relocated and went to live in a castle Scotland. 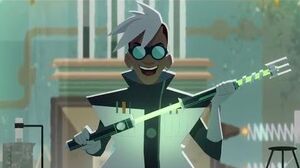