Villains Wiki
Register
Don't have an account?
Sign In
Advertisement
in: Doctors and Scientists, Cartoon Villains, Movie Villains,
and 41 more

Stealing from other mad scientists.

Win the evil science fair so that he can overthrow King Malbert (failed).

Frederick Poeklemacher, better known as Dr. Schadenfreude, is the central antagonist of the 2008 rendered 3D film Igor by MGM.

He is an evil scientist and Dr. Glickenstein's former partner in-crime who wants to overthrow his enemy, King Malbert and rule all of Malaria. Despite being an evil scientist, he has never really invented anything, and constantly steals inventions from other scientists and passes them off as his own. He also has his vain girlfriend named Jaclyn, who can change into different people by having a certain pill.

He was voiced by Eddie Izzard, who also played Sir Miles Axlerod in Disney/Pixar's Cars 2, Nigel Bakerbutcher in The Simpsons, Abel Gideon in Hannibal, Professor Bedlam in My Super Ex-Girlfriend, and Hervnick Z. Snerz in the 2019 Netflix series Green Eggs and Ham. In the videogame adaptation of the film, he was voiced by Luis Fernandez-Gil.

Dr. Schadenfreude is a manipulative, flamboyant and sadistic scientist who resorts to cheating to win the annual evil science fairs. He is a very vituperative and materialistic thief, so he steals from other mad scientists. He is also very orgiastic and provocative towards Eva, as he is having Eva getting dressed. He also shows compassion when he falls in love with his vain girlfriend Jaclyn. One of his cruelest plans is when he infrequently wins the evil science fair, so that he can overthrow King Malbert.

As said by Jaclyn at one point, he steals the scientists' plans because he himself is a very incompetent mad scientist (probably even more than Dr. Glickenstein), so it is possible that he steals from his competitors not only to win the science fairs, but also out of deep-rooted envy and insecurity against them because they are more adept at what they do.

When people first see Dr. Schadenfreude, he is playing the Phantom of the Opera theme on an organ. He is visited by the civilians of Malaria, a land covered with dark storm clouds. As his girlfriend, Jaclyn, is giving a toast to him, he is interrupted by King Malbert, Schadenfreude's enemy, and the evil king of Malaria. The king begins insulting him and humiliates him in front of the crowd. In his laboratory, he is still grieving over the king's humiliating insults, saying that he'll never get the respect the king gets. Eventually, his girlfriend Jaclyn, begins insulting him too, revealing that his entire laboratory is fake like him. He threatens to throw her back into the gutter he found her in, and the two begin fighting peculiarly, by each one furiously slapping Dr. Schadenfreude's assistant, Igor (this happens twice in the film). The fight then turns into love talk, and as Dr. Schadenfreude shoves Jaclyn into the fake equipment, he vows to unleash his new invention on the king and overthrow him.

He sends Jaclyn, now changed into the girlfriend of Dr. Glickenstein, Heidi, to retrieve his evil plans, but after she fails, he decides to break into Glickenstein's castle personally. Little did he know that Glickenstein was dead from an explosion accidentally caused by himself. He goes to the castle, only to find a great big hole in the wall. Jaclyn wonders what did this and Dr. Schadenfreude finds plans for a monster that's already been created by the main protagonist of the film, Igor (not Dr. Schadenfreude's Igor). Jaclyn insults Dr. Schadenfreude yet again by mocking that not only every other evil scientist is smarter than him, but an Igor as well. Dr. Schadenfreude gets an idea and plots to use this monster to kill the king.

Dr. Schadenfreude and Jaclyn (once again as Heidi) sneak into the castle. Heidi rudely distracts Igor outside whilst Dr. Schadenfreude talks with Eva. He tells her Igor doesn't care about her and that she was built merely to be a weapon. Eva refuses to believe this, saying that Igor cares deeply for her, but Dr. Schadenfreude opens the curtains and reveals to Eva, Igor being kissed by Heidi (this was just a distraction and Igor never wanted to be kissed in the first place). Dr. Schadenfreude tells her that Igor had someone else in mind for Eva's "role" (as she believed that the evil science fair that Igor wanted her to compete in was just a stage play of Annie, which Igor went along with). He eventually persuaded her to come along with him.

As the evil science fair commences and the competing scientists release the evil inventions, Eva steps out as well, wearing her red dress and curly wig. The audience laughs at this and Schadenfreude, but he ignores it. And as the monsters begin fighting each other, Eva begins singing Annie's main song "Tomorrow". Eva sings this in a loud voice as she successfully and effortlessly destroys all of the inventions without a single scratch on her. With Dr. Schadenfreude having already won, he walks up towards the king's box and insults the king. King Malbert is extremely furious and argumentative at him; in turn, Dr. Schadenfreude overthrows him by kicking him out of the box and onto the side of the arena. As the king's guards try to arrest Schadenfreude, Jaclyn defends him and Dr. Schadenfreude threatens to use Eva on them if they didn't obey him. Igor finally arrives to help Eva as he enters the arena, which the now villainous Eva is now attempting to bring down, frightening the audience. Igor stops her from doing it by saying that he was wrong to try to make her evil and that it is much better to be a good person than an evil one. The speech ultimately reforms Eva to the good person that she was before. However, Dr. Schadenfreude shows no concern to this and declares himself the new king of Malaria now that King Malbert has died. Eva stomps her foot hard onto the ground, causing Dr. Schadenfreude to fall out of his box and headfirst into a dumpster. Jaclyn declares herself single again once this happens.

With the arena becoming a new theater which is what seems to be a few months later, and with Igor as the new president, Dr. Schadenfreude is forced to sell pickles to the audience, living up to his original name. 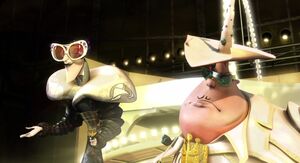 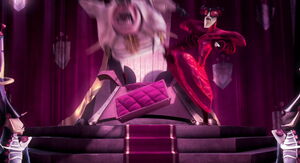 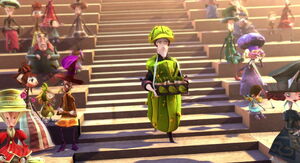 Dr. Schadenfreude as a pickle salesman.